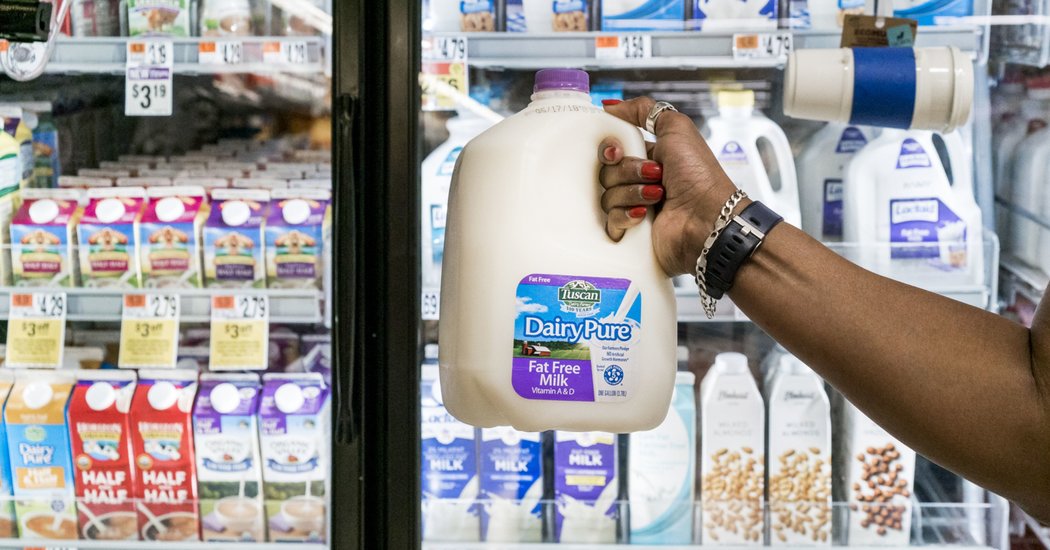 When Samuel E. Dean Sr. founded his milk company at a processing facility in Illinois, milkmen still delivered pints to homes all over the United States and children dutifully drank three glasses a day.

That was 1925. Nearly a century later, milk is quickly going out of fashion and Dean Foods — which is now the largest milk company in the United States — has found itself unable to compete as plant-based and lactose-free dairy alternatives rise in popularity.

Saddled with debt and struggling to adjust to changing consumer habits, Dean Foods filed for bankruptcy protection on Tuesday, signaling another grim chapter in the recent struggles of the dairy industry. The company, whose portfolio of brands includes TruMoo and Lehigh Valley, said it was in talks to sell itself to Dairy Farmers of America, a marketing cooperative that sells milk from thousands of farms.

Across the food and beverage industry, the challenges facing Dean Foods are becoming increasingly familiar. In recent years, consumers have moved away from brands, and even entire categories of food, once seen as household staples. The decline of the milk industry has emerged as a particularly stark example of how these changing tastes are challenging major companies whose products once crowded store shelves.

“Long ago, the public figured out that diets do just fine without milk and no, we don’t have to drink three glasses a day,” said Marion Nestle, a food studies professor at New York University. “Maybe plant-based milks are the coup de grâce, but this industry just can’t seem to keep up with changing tastes.”

Dean Foods is not the only major brand struggling to keep pace as consumer habits shift. Outside the dairy industry, Kraft Heinz has also stumbled.

In 2015, the merger between Kraft and Heinz, owners of some of the best-known brands in packaged foods, created a giant with $28 billion in annual revenue and dozens of products that Americans have eaten for generations.

But as demand for unprocessed and organic alternatives rose, the company’s sales and profits plummeted. Kraft Heinz also made steep budget cuts at a time when research and development should have increased, analysts say, with start-ups competing for shelf space.

Like Kraft Heinz, Dean Foods has watched from the sidelines as smaller rivals dominated the growing market for trendy alternatives, like almond milk and plant-based dairy products. In fact, in 2012, the company started spinning off its units that made such alternatives — a move that in retrospect looks like a strategic error.

Those brands, Silk and Horizon Organic, are now owned by Danone, the French food company.

Dean Foods and Kraft Heinz “both carry a lot of debt,” said Matt Gould, a dairy industry analyst. “And that constrains your ability to try radically different things.”

The two struggling companies have also faced competition from private-label brands developed by retail chains like Walmart and Kroger. Once one of Dean Foods’ most important customers, Walmart opened its own milk-processing plant in 2018.

Dean Foods and Kraft Heinz are not the only food companies facing competition from private-label products, which are often available at steep discounts. In August, Target announced plans for its own line of grocery products, which it expects will include more than 2,000 items and become a multibillion-dollar brand by the end of next year.

“Consumers over all in packaged food are becoming more and more receptive to private-label products,” said Simon Gunzburg, an analyst at the research firm Euromonitor. “They’re seeing them as great value.”

Before its bankruptcy filing, Dean Foods had reported losses for five straight quarters and closed some of its plants, laying off hundreds of workers. The company’s senior leadership has been in a state of flux, with three chief executives in three years. (The Dean family no longer holds a large stake in the company, which was sold in 2001 to a rival, Suiza Foods, which took on its name.)

And across the country, milk consumption is steadily declining. Americans drank 37 percent less milk in 2017 than they did in 1970, according to the Agriculture Department.

This year, the Dairy Farmers of America reported that its milk sales had dropped to $13.6 billion in 2018, from $14.7 billion in 2017. One reason for the decline is a decrease in cereal consumption: More and more Americans are switching to power bars and other breakfast options that can be consumed on the go.

The growing enthusiasm for another dairy product — yogurt — has also hurt Dean Foods by chipping away at demand for cereal. And in recent years, milk alternatives made from almonds, soy, cashews and coconuts have exploded in popularity. Many people consider them more nutritious than cow’s milk, or buy them because they have a milk allergy or lactose intolerance. Others choose them for environmental reasons, or because they want a vegan diet.

In 2016, Starbucks, the world’s largest coffee chain, started offering almond milk to lighten its espresso drinks, responding to consumer demand. And last year, sales of nut and plant milks grew by 9 percent, according to the Plant Based Foods Association, a trade group.

“When I was young, my mother would’ve told me, ‘Here’s milk — drink it,’” said Mark Stephenson, director of dairy policy analysis at the University of Wisconsin in Madison. “We’re doing different things now.”