A Burlesque Reveals More Than Expected 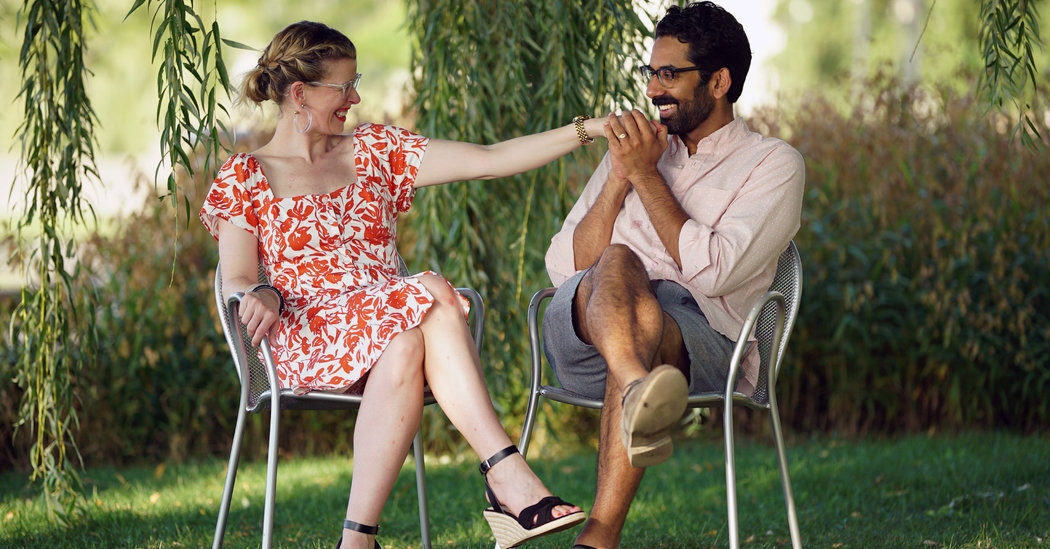 Anika Steinway Chapin and Mohit Narang were married Sept. 28 at Flushing Town Hall, a performance center and events space in Queens. Michael A. Berresse, a friend of the couple who became a Universal Life minister for the event, officiated.

Ms. Chapin, 36, is the artistic associate, in Manhattan, at Goodspeed Musicals, a theater company in East Haddam, Conn. She graduated from Vassar College and received a master’s degree in dramaturgy from Columbia.

She is a daughter of JoAnna F. Chapin and Theodore S. Chapin of Manhattan. The bride’s father is the chief creative officer for the Rodgers and Hammerstein Organization, which is in Manhattan and manages the copyrights of Richard Rodgers and Oscar Hammerstein II, as well as licensing for other shows. He is also the author of “Everything Was Possible: The Birth of the Musical ‘Follies,’” (Knopf, 2003). Her mother is a watercolorist whose work is on exhibit at the Governor John Langdon House in Portsmouth, N.H.

Mr. Narang, 33, is the managing director of Radiant Energy Systems, a company in Hawthorne, N.J., that manufactures industrial-process heating systems. He is also a writer and a producer of the film “Beside Still Waters.” He graduated from Georgetown.

He is the son of Aruna Gaind Narang of Mahwah, N.J., and the late Sarvejit M. Narang. The groom’s mother was a stay-at-home parent. His father was a founder and president of Radiant Energy Systems.

The couple met in September 2015 through OkCupid, the dating website, though both had developed a bit of romantic ennui. “Basically, from my perspective, I was at a moment in my life where I had pretty much decided to give up on dating,” she said. “I was just exhausted by it.”

But then she was contacted by Mr. Narang, who had messaged her about her self-described ability to tie her shoes very, very quickly, and he seemed smart and interesting. So they met for an hour at a bar in Midtown Manhattan.

“I think I was nervous, so I did most of the talking,” Mr. Narang said. “I had gotten very regimented about first dates.”

Both left feeling intrigued, and when she received free tickets to a downtown retelling of “Cinderella,” burlesque style, she didn’t consider whether the show would make an appropriate second date. So she invited him.

His interest heightened. “To be asked to do something that I never would have seen, it was cool and exciting and weird,” he said.

But when the show started, second thoughts caught up with her. “Think performer in pasties pole dancing on top of a carousel horse while also singing an aria,” she said. “Also, everybody is naked, and it’s a very sexy show and I’m a WASP, so I was like, ‘Oh dear, maybe this is sending the wrong message for an early date.’”

Nonetheless, she said, “The fact that he was so game, so willing to try this weird show, was a selling point.”

Afterward, they had a beer, and then walked around Washington Square Park. Neither had the nerve to initiate a first kiss, she said, and so they walked and talked instead, getting to know each other.

“She’s one of the smartest people I’ve ever met,” he said. “She has a giant heart for the weird and possibly unloved, and she gets so much joy out of very small things: little pieces of kitsch when we are traveling or perfectly brewed tea in the morning. Enormous joie de vivre.”

Ms. Chapin was struck by Mr. Narang’s interest in a diversity of things. “He has a natural curiosity, and he wants to know about all sorts of weird corners of things,” she said. “He’s totally willing to go on the adventure.”

They went to see the movie “The Martian” for their third date, and got the first kiss out of the way in front of Innovation Luggage on 42nd Street.

“From that third date on, I don’t think three days passed without us seeing each other,” he said. “By February, we were living together.”