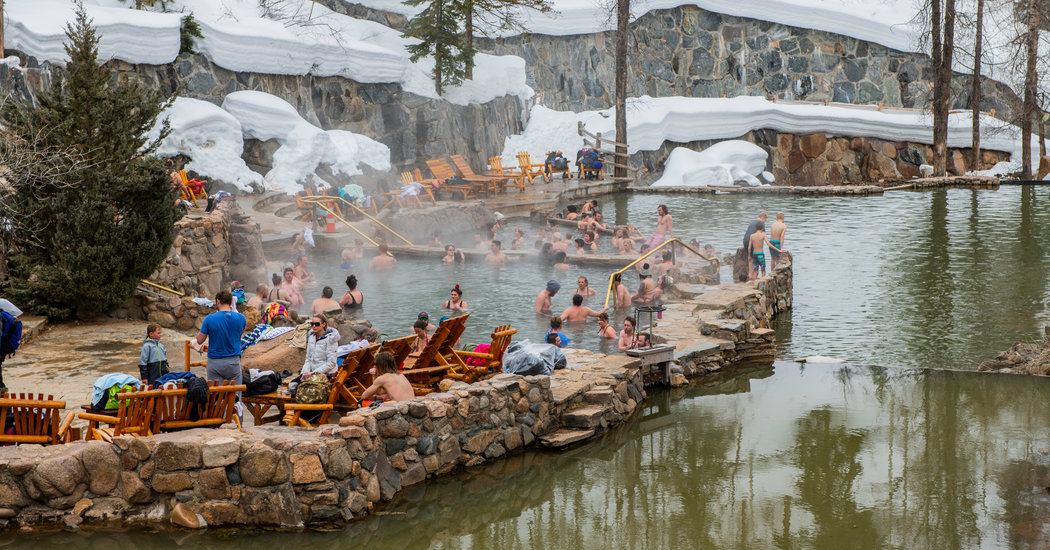 About 70 miles north of the I-70 corridor that feeds Colorado’s busiest ski areas, Steamboat Springs seems removed from the usual luxury designer shops and rampant condo development so often seen in ski towns these days. Local craft makers, artists, brewers and restaurant owners lend indie flair to the town’s main street, lined mostly with early-20th-century buildings. Supplementing Steamboat’s “champagne powder” and Western appeal, improvements at Steamboat Ski Resort by its owner, Alterra Mountain Company — which also owns Deer Valley in Utah, and Squaw Valley Alpine Meadows in California in its 14-resort portfolio — include a new gondola that shortens the ride from 12 to less than 10 minutes and boosts capacity 38 percent to 3,600 people an hour. Given Steamboat’s in-town diversions, hot springs and variety of winter sports (including snowshoeing and biking), many visitors come without Alpine ambitions. The town makes it easy even for those without a car — free buses circulate nearly every 10 minutes in winter between downtown and the ski resort, supplemented by ride-sharing services.

1) 3 p.m. Walking in a winter wonderland

To adjust to the climate and altitude, take in the stunning surroundings with a snowshoe hike on the trails around Fish Creek Falls about four miles east of town. Rent a pair of snowshoes from downtown’s Straightline Sports ($10) and head out to watch the ice climbers at the frozen falls before ascending the steep trails shared by local dog walkers and trail runners. If you’re in the mood for skiing, wait until darkness falls. Visitors landing early at Yampa Valley Regional Airport can night-ski for free at Steamboat Ski Resort by showing their airline boarding pass at the ticket window.

Steamboat offers a refreshing break from the parade of luxury and outdoor brands that fill most American ski towns. Here, it’s possible to shop local for everything from paintings to down parkas. Look for artwork at Pine Moon Fine Art where many of the artists can also be found working in the gallery. Both The North Face and Marmot have shops on the main drag, Lincoln Avenue, but so does Bap, the local brand of fleece and outdoor apparel. (Many shops also carry socks by SmartWool, a popular outdoor company founded here.) For gifts and accessories, visit Ohana, which designs its own clever T-shirts and carries locally made jewelry, leather bags, knit hats and kitchen goods made with wood from trees killed by invasive beetles.

In just two years, Steamboat Whiskey Company has outgrown its original distillery and plans to open a new bar on Lincoln Avenue. For now, visitors can still belly up to the rustic wood bar in view of the stills on the other side of the windows and order one of the craft cocktails that showcase Steamboat Whiskey’s spirits, including its 100-proof Territorial Moonshine. Run by Nathan Newhall, a former Navy SEAL, and his wife, Jessica Newhall, the bar offers free tastings and donates a portion of the proceeds from the sale of its bottled Warrior Whiskey to veterans’ causes. Try the Mountain Smoke Manhattan, which comes with a cloud of smoke captured under a glass cloche or, for something deemed “curative” or botanical, the Medicinal Courage, a blend of whiskey, bitters, lemon juice, amaro, star anise and rosemary.

The riverfront Aurum Food & Wine frames views on the opposite bank of Howelsen Hill Ski Area, training grounds for many of Steamboat’s 96 Winter Olympians. Picture windows offer views of the ski jumping, when in session, though there’s plenty of good food and genuine bonhomie, including live music in the packed bar, to keep you entertained indoors. The owner, Phil Armstrong, set out to create the kind of sophisticated restaurant he loves in major cities without giving up the relaxed ski town vibe. The menu volleys between comfort food (crispy brussels sprouts, $9, brownie sundae, $10) and global flavors (Japanese fried chicken, $14 and Mediterranean-accented braised lamb shank, $42). Hardy diners clad in down take their nightcaps to the outdoor fire.

Steamboat is surrounded by rolling ranch land and cowboys still have a presence in town, especially at F.M. Light & Sons, the outfitter that has been dealing boots and Stetson hats since 1905. Winter horseback riding at Del’s Triangle 3 Ranch, about a 30-minute drive north of town, offers an introduction to ranch life and a glorious ride in the snow-covered wilderness ($105, including round-trip shuttles from the ski area). The adventure features the cowboy and skier Ray Heid, a fourth-generation local who was an alternate on the 1960 Olympic ski-jumping team. At 82, he still leads two-hour rides through Aspen forests and between fields frosted in fondant coats of deep snow, with occasional sightings of elk, coyote and fox.

If you think every turkey sandwich is built alike, reconsider your theory at the Paramount, a cozy spot next to the Right-O-Way run on the north side of the ski base. Because the kitchen prides itself on cooking from scratch, that turkey is actually roasted in-house and stacked on thick grilled bread with avocado, peppers, Swiss cheese and spicy mayo ($12). Two-fisted sandwiches are served indoors or out at picnic tables in view of the lifts. Open daytime only, this is a great breakfast option, too, for breakfast sandwiches made with eggs and bacon ($9) or filling chilaquiles ($11).

Steamboat Springs calls itself Bike Town USA, largely for road, mountain and commuter biking in the snowless months. In the winter, cyclists turn to fat-tire bikes that grip the snow. Test your balance, your quads and your lungs fat biking, as it is known, at the Haymaker Nordic Center, a seasonal golf course that turns into a groomed cross-country ski area in the winter. Haymaker also grooms 10 kilometers of single-track trails specifically for fat biking, which allows cyclists to stay atop the compacted routes or risk a soft landing in deep powder (two-hour bike rental $19; trail pass $20 to $22).

Native Americans came to the Yampa Valley for its mineral springs long before the early 19th-century French trappers who, according to legend, mistook the gurgling water for a chugging ship and named the area Steamboat Springs. The most natural setting for a spa, Strawberry Park Hot Springs, about a 40-minute drive from downtown, dams up several naturally fed pools, whose temperatures range from about 101 to 105 degrees (admission from $15). For chills, bathers jump into the icy river adjoining the pools or roll in snowbanks. Be aware that the springs are adult-only and clothing optional after dark. Since the mountainous road requires a four-wheel-drive vehicle, take a shuttle with Sweet Pea Tours ($45, including transportation and springs admission). If you’re a lap-swimmer or traveling with children, hit the newly expanded Old Town Hot Springs, which has 25-yard lanes and, in a separate pool, water slides, all heated by the downtown Heart Spring (admission $18).

Ski town restaurants tend to camp out at the culinary poles anchored by affordable hamburgers and expensive steaks. Mountain Tap Brewery resides somewhere mid-spectrum with wood-fired cooking and house-brewed beer. The co-owner and brewmaster Rick Tucciarone spent a dozen years at Kona Brewing Company in Hawaii before opening Mountain Tap in 2016. He makes a range of styles, including the light Locals’ Lager and piney, dry-hopped Picking Hops (most pints are $6). Pair a pint with a mini kettle of the rich and spicy popcorn made with chili oil and Grana Padano cheese ($3), then move on to a margherita pizza with San Marzano tomatoes ($13) or the roast Rocky Mountain trout ($23). Like your shuttle driver or Airbnb host? Buy them a beer here in advance via the “Beer it Forward” chalkboard.

Steamboat is not a late-night town; in fact, if it’s snowing, locals and visitors alike often call it a night by 8 p.m. in order to get in the gondola line by 8 a.m. the next morning. For those who choose to continue the après-ski party après dinner, the Old Town Pub, lodged in a former 1905 hotel, usually offers live music on Saturdays (cover varies). For improv shows, stand-up comedy, films and plays, check the listings at the 1926-vintage Chief Theater downtown.

Don’t leave town without dining at one of the popular Rex’s Family of Restaurants, which masters a portfolio of cooking styles, from convivial Mexican at Salt & Lime to Mediterranean small plates at the romantic Laundry Kitchen & Cocktails. For pre-ski sustenance, hit Rex’s downtown Creekside Café, a cozy breakfast and lunch spot where the servers are quick with coffee refills. The kitchen specializes in eggs Benedict, offering seven varieties. including the BAT, with bacon, avocado and tomatoes ($15), alongside filling breakfast burritos ($13.29) and chile- or bacon-infused Bloody Marys ($9).

At 2,965 acres spread over six peaks, with runs nearly split between intermediate (42 percent) and advanced (44 percent), Steamboat Ski Resort is an explorer’s destination known for powder stashes in its glades (lift tickets from $115). Wherever you ski, by 11 a.m. take a break and make your way to the Taco Beast, a snowcat-cum-food-truck (check @TacoBeastSBT on Twitter for its location). The menu of four taco varieties includes elk chorizo and beef barbacoa ($5 each). Save room for esquites, roast corn mixed with sour cream,, queso fresco and spices ($5). Eat to the beats broadcast over speakers at the pop-up patio in the snow, furnished with picnic tables and camp chairs. The kitchen shuts down when the tacos sell out, usually around 1 p.m., when thirsty crowds ski down to T Bar at Steamboat, a self-described “dive bar” at the base of the mountain.

Across the street from the Old Town Hot Springs, next to a bus stop for the ski base and within walking distance of all the shops, restaurants and parks downtown, the Rabbit Ears Motel caters to the car-free as much as the budget-tight. Breakfast is included, which guests frequently supplement with groceries from the coop next door. Rooms from $119; rabbitearsmotel.com.

Those who prefer to stay at the ski base have a range of options, including the slope-front Steamboat Grand, home to a generous pool and two hot tubs (rooms from $97; steamboatgrand.com). There are also many rental condos here listed on Airbnb, including a one-bedroom condo near a gondola that delivers guests to the mountain base, three hot tubs, a pool and fire pits ($329; airbnb.com).