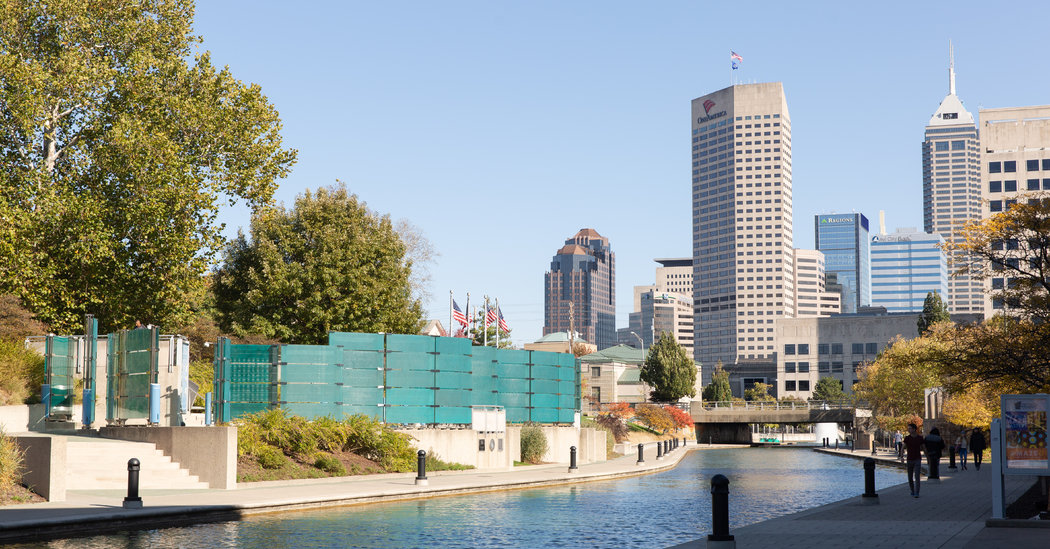 Naptown. India-No-Place. My hometown had a lot of nicknames when I was growing up there in the ’80s and ’90s, few of them charitable. Even more generous ones, like “Crossroads of America,” seemed to say that Indianapolis was a place one merely passed through. But things have changed since then. These days, I’m playing catch-up each time I return home, overwhelmed by the new restaurants, galleries, venues and boutiques bringing youth and energy to its streets. A new public transportation system called the Red Line, opened in September, connects the mid-size city’s most vital cultural areas, making it easier and safer than ever to bounce from one hip dive or farm-to-table restaurant to the next. And for all the new places to eat, browse or catch a show, Indy stays true to its Midwestern roots: short on pretension, heavy on pork and still, for the most part, incomprehensibly cheap.

The Indiana Central Canal was dug in the 1830s as a way to transport goods, but was never completed. Today, the downtown portion is flanked with museums and parks as it makes its way toward the White River. Start at the Eiteljorg Museum just a few blocks west of Monument Circle. Dedicated to the American West, it is brimming with a world-class Native American art and artifacts collection, including works by contemporary artists like the painter Kay WalkingStick and the multimedia artist Joe Feddersen. For sports fans, a pleasant stroll along the canal, past the Indiana State Museum, leads to the N.C.A.A. Hall of Champions, which showcases talent in all 24 N.C.A.A. sports. And this month, the Kurt Vonnegut Museum and Library, dedicated to the city’s favorite literary son, is scheduled to reopen in its new location on Indiana Avenue, just a few blocks north of the Eiteljorg. Included in the collection are his drawings and an array of rejection letters, including one from The Atlantic Monthly that said his account of the Allied bombing of Dresden, Germany, during World War II wasn’t “compelling enough” to publish.

Opened in 2013, the Alexander hotel was developed as a joint venture with the Indianapolis Museum of Art. Art-themed hotels weren’t new, but the collaboration set it apart, as did the collection. Its crown jewel, however, may be the bar, Plat 99, designed by the Cuban-born artist Jorge Pardo, hung with 99 colorful, hand-molded acrylic lamps. The menu includes pick-me-ups like a latte made with doughnut milk for $6 (that’s milk in which doughnuts have been soaked) and a cocktail made with two kinds of local moonshine for $12. From there, grab a bar seat at nearby St. Elmo Steak House, which most locals agree is the city’s best steakhouse, dating to 1902. Stay for a dry-aged rib-eye, or just do what I did: Pop by for a dirty martini and its rightfully famous shrimp cocktail ($15.95). The sauce is made daily and not for the faint of heart: It’s at least three-quarters horseradish, edible with a fork.

Just southeast is the hottest area in town, Fountain Square, where many restaurants have opened in the past decade, some of them quite good. Bluebeard, a James Beard Award semifinalist, is one of the best in town, with an ever-changing menu of locally sourced New American cuisine. Small plates might include chicken liver pate with pepperoncinis and candied pepitas ($14), while a regional staple like the pork chop comes with European accents like grilled focaccia, gremolata and smoked Coppa ($46). Looking for something more low-key? Iaria’s has been dishing out traditional Italian food in a family-style setting since 1933. Fill up on a huge plate of traditional spaghetti and meatballs for about $14, or fettuccine with spicy clam sauce for $21.

After dinner, head to one of the many music and entertainment venues clustered in Fountain Square. Hi-Fi and Radio Radio are intimate spaces for local and smaller national musical acts — mostly indie, folk, rock and hip-hop. Pioneer is the place for experimental, jazz, hip-hop, electronic music and late-night themed dance parties. The White Rabbit Cabaret hosts small musical acts, comedy, storytelling nights and rowdy burlesque shows. Nightcap? Stop by the deco-styled Brass Ring Lounge to mingle with the beautiful and tattooed.

A few years ago, Bon Appétit published a lengthy article in which the writer wondered “whether this city can hit all those Brooklyn notes and still feel distinctively like Indianapolis.” The answer was mostly “yes,” thanks in part to Milktooth, in Fountain Square. Its strength lies partly in its razor-sharp focus: A self-confidently downscale, daytime-only joint, it goes all-in on heavy, classic fare in ways that feel new. The Dutch baby pancake comes with ham or shiitake mushrooms and Swiss cheese, cranberry mostarda and grapes ($14). The grilled cheese is made with cranberry walnut bread and black truffle honey, topped with a duck egg ($17).

I always hit the vintage stores back home because unlike in New York, that perfectly faded ’70s concert tee hasn’t been marked up to 10 times what it’s worth. Burn off that sourdough brioche doughnut from Milktooth by walking down Virginia Avenue to Vintage Vogue and its neighbor Zodiac Vintage, which specializes in vintage designer clothing, band T-shirts and American work wear. On the same block is Square Cat Vinyl, which has old records, but also a lot of new ones, along with a bar that serves coffee and beer. The neighborhood owes its vintage soul largely to the restored Fountain Square Theater building, first opened in 1928, which hosts swing dance nights and has two duckpin bowling alleys. (The 1930s-style alley on the fourth-floor, Action Duckpin Bowl, costs $40 an hour per lane.) For the uninitiated, the sport involves balls that can be palmed (no holes), like a cross between regular bowling and Skee-Ball. Like those sports, it can also involve beer.

The closest thing Indiana has to a state food is the pork tenderloin sandwich: a tenderloin medallion, pounded until it is as broad and flat as an Indiana cornfield, then breaded and deep-fried. In its most authentic form, it’s a comedic sandwich: The meat can run 8 to 12 inches wide but is often served on a regular-size bun, meaning you can’t actually eat it with your hands. Hoosiers have strong and varied opinions about who does it best, but the tenderloin at Aristocrat, just south of the Broad Ripple neighborhood (in the area commonly referred to as South Broad Ripple), a wood-paneled pub and restaurant established in 1933, always ranks among the city’s best ($11.55). Aristocrat also offers a grilled, non-breaded (sacrilegious) version for (slightly) more health-conscious customers.

Head west to the elaborate grounds of the former Eli Lilly estate, home to the Indianapolis Museum of Art. The whole complex was inexplicably rebranded Newfields, but the art and botanic gardens are as world-class as ever (personal favorites include the extensive Asian art section and works by J.M.W. Turner and James Turrell), and the seasonal beer garden is delightful in warmer months. Across the canal is a 100-acre nature and sculpture park; like Storm King Art Center in upstate New York, it is especially lovely when the leaves are turning each fall. (The park is free; all-access admission to the museum and gardens is $18.)

Broad Ripple has had many identities over the decades — these days, it’s where the clubbing and sports-bar crowd parties on weekends — but the neighborhood never completely lost its bohemian roots, as evidenced by its many vintage stores, cafes, brew pubs and locally owned restaurants — my favorite being Public Greens, a cafeteria with a healthy, locally sourced menu (when I went, it included a strawberry salad with kohlrabi for $6 and a blackened trout bowl with quinoa, veggies and ranch dressing for $16) that donates 100 percent of its profits to charity. While you’re in Broad Ripple, stop by the Monon Coffee Co. for coffee or one of many teas — pu-erh ginger, sencha fukujya, blue jasmine with pea flower. (Full disclosure: I used to sling lattes there.) The area is also home to my two favorite Indianapolis record stores, both of which host in-store concerts: Indy CD & Vinyl, on the main strip, and Luna Music, just south on College Avenue. The Monon Trail, a wooded walking and biking trail paved over an old railway line, is just a few blocks out of the way and the nicest way to wander south before sundown.

Across the street from Luna, make time for drinks at the Red Key Tavern, a quiet haunt for local artists and literary types since 1933. The secret to its conversation-friendly vibe is the rules, including no loud swearing and no standing at the bar. It doesn’t hurt that the drinks are unpretentious and cheap (a Manhattan with a maraschino cherry is $5.25; bottles of Miller Hi-Life are $3.25), the antique jukebox is loaded with Big Band 45s, and the cheeseburger ($5.50) is regularly voted best in town. (The kitchen closes at 10 p.m.)

“You can kind of, like, do stuff in Indianapolis, and it’s cheap enough where you can get away with whatever.” So sayeth Chef Chris Benedyk, of the appropriately named Love Handle on Massachusetts Avenue, the heart of the local gay scene and another bustling strip for restaurants, bars and boutique shopping. At Love Handle, that means getting away with putting things in your breakfast that confuse the brain but somehow make sense to the mouth. The fluid menu may offer fried oysters with your grits ($9). Waffles may come with braised beef tongue and a duck egg ($13). And if biscuits and gravy weren’t rich enough per usual, here they might include butternut squash and pork belly ($15.25).

On the same block, stroll over to Homespun: Modern Handmade, which sells work by more than 400 artists and artisans, about half from Indiana. A few doors down, Boomerang Boutique also spotlights local designers, emphasizing diversity and women’s clothing and accessories. But it’s afternoon now, so head over to the tasting room at Sun King Brewery to sample the roughly 25 beers on tap. An in-house lunch counter run by Goose the Market, an upscale local deli that smokes and cures its own meats, has you covered if you get hungry again.

Many hotels have art, but the art at the 209-room Alexander — made by local, national and international artists — is installed museum-style, with identifying wall texts. The downtown location puts you right in the city’s heart and close to Fountain Square, and the bar, designed by the MacArthur “genius grant” winner, Jorge Pardo, is one of Indy’s most fashionable spots come nightfall (333 South Delaware Street; thealexander.com; doubles from $159).

Once you leave the clubs and sports bars of Broad Ripple Avenue, the surrounding neighborhoods are full of eclectic cottages, ranch homes and bungalows on quiet streets lined with old trees. The swath just east of College Avenue, roughly between 56th and 49th Streets, are great for Airbnbs, with entire bungalows starting around $60. Wooded jogging trails and dozens of bars and restaurants are within walking distance.