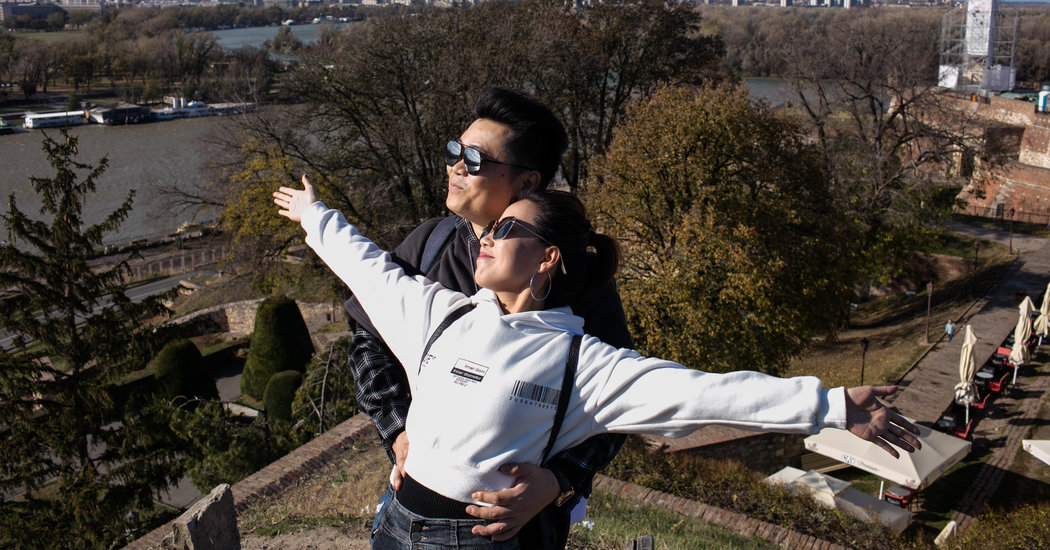 While tourists are flooding European cities like Barcelona, Venice and Dubrovnik, the Serbian capital is quietly molding itself into a very fun and accommodating Balkan metropolis. Chefs are getting creative with Serbian cuisine and the cocktail bar scene has taken off, much to the delight of sophisticated locals. The National Museum and the Museum of Contemporary Art have just reopened after unexpectedly long renovations. Now the residents of the former capital of Yugoslavia are just waiting for the world to make a beeline to this affordable, friendly city with so much to offer.

The beloved National Museum was shut down in 2003 for renovations and remained closed for so long that locals started to assume it would never reopen. But then it did in 2018 to much relief and fanfare. The museum, housed in a spruced-up neoclassical building, contains three floors of magnificent works, including Roman-era artifacts from around Serbia, paintings by the likes of Tintoretto, Monet and Renoir, and 20th-century works by the Yugoslavian painters and sculptors Marko Murat, Nadezda Petrovic and Ivan Mestrovic. Entrance is 300 dinars, or about $2.80.

One of the few gastro pubs in the Serbian capital, two-year-old Endorfin specializes in comfort food. Homesick New Yorkers can get a bacon, egg and cheese on a roll — inspired by co-owner Milos Vuksic’s years of living in the Big Apple — or an excellent lamb burger. But visitors might be more interested in the Balkan-inspired dishes with a twist: grilled Miroc cheese from the mountains of eastern Serbia, drizzled with honey mustard; tender, juicy cevapi, the ubiquitous cigar-shaped minced meat, made with lamb instead of the usual beef; and veal tongue with beetroot, a delicious play on textures that may give you an endorphin rush by the time you’re finished. Expect to pay about 4,000 dinars for dinner and drinks for two.

Newly opened Dim (the Serbian word for smoke) was started by Dragana Dobric, who also co-owns the popular club and cultural space Drugstore. Set in a high-ceilinged industrial room in Cetinjska — the former Bip Brewery complex in the central Skadarlija neighborhood that is now crammed with hip bars and restaurants — Dim functions as a bar, a club, an exhibition space, a live avant-garde music venue, and a hub for artistic and creative types. Most performances occur Wednesday, Friday and Saturday evenings, but turn up any time to have a cocktail while basking in the charmingly dilapidated space that is bathed in purple hues.

Yugoslavia was a fascinating conglomerate of Southern Slavs — the literal meaning of “Jugoslavia” — and this museum takes visitors from the post-World War I Kingdom of Yugoslavia through the post-World War II Socialist Yugoslavia, led by the dictator Josip Broz Tito who kept the federation together and peaceful until his death on May 4, 1980. It’s been nearly 40 years since the Uniter-in-Chief passed away, so it’s an appropriate time to visit the Museum of Yugoslavia. Even Tito’s grave — tastefully encased in marble under a glass ceiling — is on the premises in a building called the House of Flowers. You can also see a collection of gifts Tito received from other world leaders and other public figures, including moon rocks that the crew of Apollo 11 gave him. For a unique souvenir, stop by the gift shop to pick up a piggy bank in the form of Tito’s head — in blue, red, black or yellow for 2,500 dinars. Admission is 400 dinars.

Since 2014, this sleek, industrial-chic restaurant has been manufacturing meaty Balkan fare. Keep your Lipitor pills within arm’s reach. You may need an artery un-clogger after a meal here. But Manufaktura is worth it. Bacon-wrapped prunes, sausages from Slavonia in Croatia, goulash from the region of Vojvodina in northwestern Serbia, and plates of cheese from all corners of the country round out a menu that will fill any meat eater with palate-pleasing delight. To buttress some of that cholesterol-laden grub, order a shopska salad: chopped cucumber and tomatoes topped with grated goat cheese. Expect to pay about 3,000 dinars for lunch for two.

Over a decade ago, Bojana Boshajacki was backpacking around Europe and made a life-changing discovery: vintage fashion shops. She realized Belgrade sorely lacked one. A couple of years later Jane Doe Vintage was born. Today, the small, 11-year-old shop in the leafy, central neighborhood of Dorcol is packed with groovy blouses and dresses from 1960s and ’70s Yugoslavia, early ’80s men’s shirts, and accessories such as vintage Gucci sunglasses — all for a fraction of the price you’d find in countries farther west. For something more contemporary, check out DechkoTzar in the pedestrianized center of town, a small shop that sells smartly designed T-shirts with Belgrade references on them. You can also pick up a copy of “50 Shades of Belgrade,” an adult coloring book, and an English-language graphic travelogue called “Snippets of Serbia.”

In the Balkans, you can’t throw a plum without hitting someone who makes their own rakia, a fruit brandy that is stomach-meltingly potent. Branko Nesic had a hunch that Serbs were going to eventually want a higher-quality drink. Some rakia distillers did, too. So Mr. Nesic opened Rakia Bar in 2006, offering something unusual to the public: excellent artisanal rakia, some of which is barrel-aged for up to 10 years, giving it a deeper, more complex taste. Now he’s taken it to the next level by opening up the Belgrade Urban Distillery in the Beogradski Market, a hip spot filled with street food stands, vintage clothes retailers and a record shop. You can sample some of the 23 different rakias in the distillery — made from plum, quince, apple and apricot, among other fruits — or buy a bottle to take home. A half-liter bottle costs 800 dinars.

This rustic restaurant (whose name is translated as Little Taste Factory) on the border of the trendy and slightly upscale Vracar and Neimar neighborhoods serves Serbian dishes with some creative license. The menu is divided into two parts, “Traditional” and “Imagination,” the first focusing on Serbian dishes like paprika-spiked cevapi and beef goulash, while the second veers toward tender pork ribs and steak with prune sauce. The wine list is long on Serbian wines with a few Croatian, Czech and Italian bottles thrown in. In the warm-weather months, grab a table on the leafy stone patio. Dinner and wine for two is about 4,000 dinars.

The cocktail bar scene in Belgrade has exploded. One of the first to open — and still one of the best — is Kultura Bar, in the quiet neighborhood of London. In 2012, Juraj Kozma and Zivko Budelan were bartenders in nightclubs and pubs and felt like the city needed a more sophisticated bar. So they opened this ambient and refreshingly sedate spot with a glass bar filled with bric-a-brac, which today is still shaking up a serious collection of classic and signature cocktails — including a near-perfect Negroni — to an increasingly cocktail fluent local crowd.

The fortress complex on the hill, Kalemegdan, is the spot where Belgrade was born. Formerly a Roman outpost of Singidunum and then a medieval Turkish outpost, it was converted into a park in the mid-19th century and today is home to cafes, museums, and the Belgrade zoo. It’s a pleasant, tranquil place for a Sunday stroll, taking in the views of the confluence of the Danube and Sava Rivers. Pose for a photo at the Victor Column, or Podebnik, erected in 1928 to commemorate the Serbian victory over the Ottomans in the 1870s and the Austro-Hungarian Empire after World War I.

The emphasis at Bar Sasa, which opened in 2017, is meat. Specifically steak. Cuts of rib-eye and porterhouse are aged for 21 days. But it’s not all steak here. The weekend brunch for 1,900 dinars per person, is an all-you-can eat affair with unctuous roasted pork, beef stew, chicken skewers and ample amounts of cured meat. For a traditional Balkan specialty, try the pleskavica, a patty of ground beef stuffed with cheese. Here, this popular street food item comes topped with a stewed red pepper stuffed with buttery, creamy kajmak cheese. It’s one of the best versions in Belgrade. The wine list spins around the region offering bottles from Italy, Croatia, Slovenia, and Serbia.

In leafy Vracar, just down the road from the massive Saint Sava Church, one of the largest Eastern Orthodox temples in the world, Saint Ten (Svetag Savi 10; +381 11 411 6633; www.saintten.com; doubles from $180 per night) is a 55-room boutique hotel that first flicked on its lights at the end of 2016. The rooms are smart and comfy, with marble bathrooms.

Ever walk through a shopping mall to get to your hotel? It’s not the most pleasant of activities, but you’ll want to do it to get to Mama Shelter (Knez Mihailova 54A; +381 11 3333 000; www.mamashelter.com; doubles from $85 per night), which opened in spring 2018. It sits atop the new Rajiceva shopping center, smack in the center of Belgrade’s pedestrian zone. The 125 rooms are simply furnished, but comfortable, while the terrace bar and restaurant have become a mainstay meeting point for locals, expats and visitors.

Private apartment rentals in Belgrade are a very affordable option, too. In central and pretty Dorcol, expect to pay about $35 per night for a one-bedroom apartment.