Zendaya Can Change the World 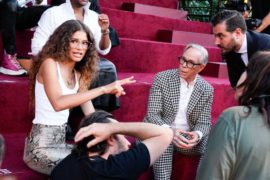 Social change follows its own timeline. It was in the prehistoric 1990s that I began to report on racial inequities in fashion serious enough to attract the attention of the commissioner of Consumer Affairs in New York.

In stories I reported at the time, industry players demonstrated a startling lack of concern about the prevalence of racism so entrenched that one top designer would blithely note that while, of course, he cast black models for his runway presentations, it was only for summer collections. Their skin tones, he said, set off the colorful clothes.

This was long before the formation of the activist Black Girls Coalition and any number of later industry initiatives to rectify a glaring imbalance between racial representation on fashion runways in relation to the real world.

It would take decades to right a historic wrong and, likely as not, it was market forces that drove the push for diversity as much as politics.

Yet there we were backstage at the Apollo Theater on a beautiful Harlem evening, and Zendaya, the onetime Disney child star who, thanks to a career-defining role as a recovering teenage addict in the HBO series “Euphoria’’ and an Instagram following close to 62 million, has been transformed into an unstoppable cultural phenomenon, was extolling the advances made in representation while noting problems left to address.

This was in advance of a cinematic street-side spectacle — as much raucous block party as runway show — for Tommy X Zendaya, a debut collection that Zendaya, 23, designed for Tommy Hilfiger. “There is a lot that needs fixing,” the actress said. “But representation and inclusivity is always at the forefront.” There are doors left to open and doors to break down, she said: “Everyone needs to feel seen and like they are part of the fashion world.”

The validity of her assertion was easy enough to gauge from the backstage mob scene that included producers, makeup artists, hairdressers, dressers, publicists, caterers, manicurists, sound and lighting engineers and assorted hangers-on. The racial composition — and that of the body types represented — inside the Apollo was not radically different from that of 125th Street, Harlem’s main thoroughfare. The shift felt as welcome as it was long overdue.

“For years and years it was inevitable that, when I came into a show, I was the only black person in the room, including the models,” said Kayla Fenwick, a makeup artist, as she took a break from applying a “halo eye” and matte brown lip to women like the gorgeous Dominican stalwart Lineisy Montero, the Jamaican breakout star Tami Williams and Grace Bol, a South Sudan beauty discovered at a mall in Kansas City, Mo.

“Growing up, you never even knew a black model could be in the industry,” Ms. Williams said.

Though at 21, she would seem too young to have experienced the negative effects of racism in fashion, that is not the case. “Oh, it has changed drastically in the five or six years” since she first entered the business as a coltish 15-year-old, she said. “It is much more diverse now, but there can still be more in terms of different shapes and sizes and colors.” In fact, as Mr. Hilfiger would note later, he had cast this particular show with an emphasis on hiring models across a range of body types.

Just then, the disembodied voice of the seasoned show producer Alexandre de Betak came over the loudspeaker calling for rehearsal and all thoughts of politics were forgotten amid a model stampede.

“Girls!” Mr. de Betak said in his burred French accent. “We’re only doing one run-through, so I need you to focus! Look happy! Look very up! Look right into the cameras and smile. And, if the girl in front of you is slow, don’t walk on her.”

FacebookshareGoogle+sharePinterestpin it
Like Wheat Thins, but BetterA Wheat Whiskey From Woodford Reserve
Latest