You Too Can Play the Handbag Stock Market 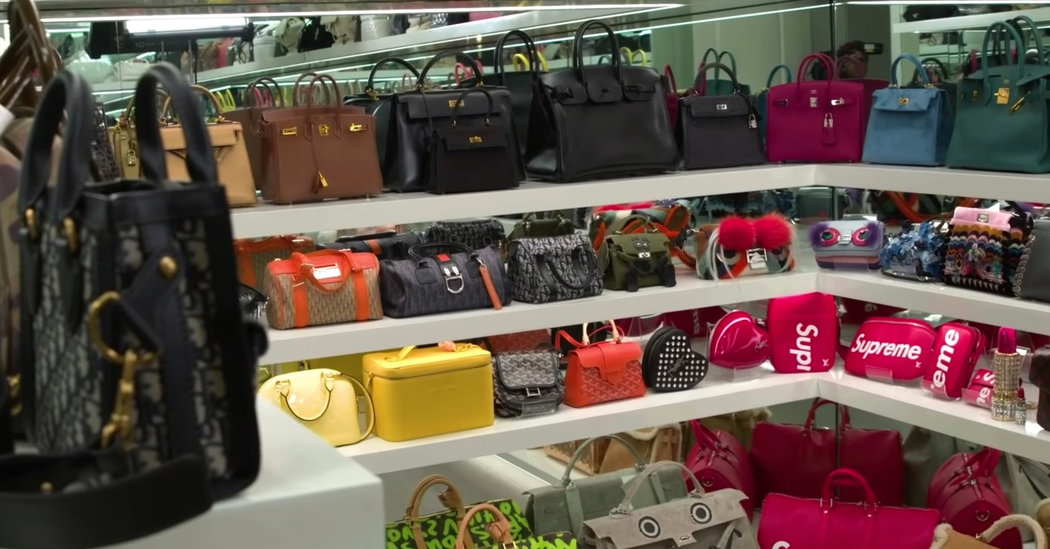 Earlier this year Kylie Jenner, the beauty mogul and Kardashian-Jenner family member, gave one of her patented home tours to Architectural Digest.

It featured her collection of Pop Art, arcade games and her “purse closet,” a special room that includes a reported 400 bags (or more), encompassing many Hermès Birkins, Chanels and Diors, and that has been a point of pride for Ms. Jenner.

“I have been collecting these bags for a minute,” Ms. Jenner said enthusiastically in another tour, chronicled on YouTube in 2018. “They’re also a great investment.”

That’s the kind of statement that can make viewers roll their eyes and cringe, except that she is not exactly wrong. Hermès handbags have spawned a singular secondary market and have sold for jaw-droppingly high prices at auction. (One of those apocryphal fashion sayings has it that an Hermès bag is a better investment these days than gold.)

But lately it seems that Hermès is no longer alone. High-end handbags, like high-end sneakers, may be turning into an asset class of their own.

Which implies it may be time to stop thinking of that purse closet — or shelf, or wicker storage bin — as part of your wardrobe and to start thinking of it as part of an investment portfolio, complete with blue-chip stocks, the opportunity to short some names, and to make more money while doing so.

That’s what Charles Gorra thinks, anyway. He is the founder of Rebag, a luxury handbag resale site, and on Oct. 24 he is introducing Clair, a.k.a. the Comprehensive Luxury Appraisal Index for Resale.

It is an algorithmic tool that shows bag owners the resale spot prices of their bags if they were to liquidate them immediately by selling to Rebag. (Unlike other resale sites, Rebag buys stock outright, rather than giving the owner a percentage of the sale when it occurs.)

Over the next few months, Mr. Gorra will introduce tracking features that allow you to see the rise and fall of those prices, the better to calculate the future value of a bag — and make a buying or selling decision in the moment.

“The information is: What percent of retail am I recouping?” he said during a demonstration of the tool. “I can see a time when people will buy bags differently based on that. The true value of a luxury brand is in its stickiness: its percent of retained value.”

The pioneer of the accessory index is StockX, the resale site that was valued at over $1 billion in June after its series C fund-raising, and which treats fashion products like commodities to be bought and traded. Though it is most famous for sneakers, StockX expanded into watches and luxury bags in 2017.

If StockX is the New York Stock Exchange of accessories, however, with buyers and sellers dealing directly with one another, Rebag (which is significantly smaller) aims to be Nasdaq: a dealer-moderated market, with prices set as an aggregate of behavior.

And the fact that there are now at least two such exchanges reflects a shift in the way we buy handbags: a move away from the It-bag engine of aspiration and social signaling that once powered the luxury market and into more tempered, calculated purchase patterns.

According to NPD’s Consumer Tracking Service, in the 12 months ending in August, the women’s handbag market in the United States was $5.9 billion, down from $7 billion two years before, a decline of 15 percent.

By contrast, sales of women’s backpacks grew 10 percent during that time, and sales of fanny, waist and belt bags grew more than 200 percent.

Beth Goldstein, the fashion footwear and accessories industry analyst at NPD, sees this as an indication that handbags are beginning to be bought more according to concrete indicators like functionality and use, rather than impulse or trend.

Luca Solca, a luxury analyst at Bernstein, pointed to the rise in popularity of smaller bags, which tend to cost less, as a possible reason for the change. That, he said, “goes hand in hand with bags that women can wear on their shoulders or across their chest as they need both hands to tap into their mobiles.”

In addition, the time when one bag could dominate a selling cycle the way the Chloé Paddington or the Mulberry Bayswater or the Balenciaga Lariat once did, has ended. Instead, tastes are fragmented, and the logo-driven big brands increasingly share shelf space with more smaller, less identifiable labels: Fontana Milano, Wandler, Hunting Season.

Not to mention climate-crisis-driven product fatigue, with its associated backlash against indiscriminate purchasing.

As a result, handbags are becoming less of an emotional purchase and more of a rational one. And the people buying them, Ms. Goldstein said, are starting to behave a lot like car buyers, who plan and research their purchases in advance and “think about the investment value.”

It’s not an accident that Mr. Gorra describes wanting Clair to become the handbag equivalent of the Kelley Blue Book, the automotive reference resource that uses new and used car pricing to arrive at a fair market value.

Mr. Gorra, who began his career at Goldman Sachs and Texas Pacific Group, saw the possibilities in the bag market after a stint at Harvard Business School, during which he worked in product development for Rent the Runway.

He started Rebag in 2014 with the idea that it could serve as a means to “instant liquidity” through bags, and has since raised $52 million and opened nine stores in the United States, with plans for an additional 20. He said he always had Clair in mind; Rebag has been building it for five years.

At the moment, there are 10,000 Clair codes, and the number is growing. Bag owners, who do not have to be Rebag customers, can bookmark their bags and track their value.

Clair can tell you, for example, that the Louis Vuitton Pochette Metis would sell for almost 100 percent of its original price, for example, but the LV Papillon, a more common style, is closer to 40 percent.

And though the data tracking prices through the years is not yet available to the general public, certain conclusions can be drawn — and will be. Every quarter, Rebag will publish Clair’s Picks, a list of bags it recommends that people buy or sell, the same way an analyst shares stock picks. To wit: The Fendi Mama bag has gone up 44 percent in resale price since 2018; the Christian Dior logo book tote is up 26 percent.

According to Mr. Gorra, the ultimate safe bet in the bag market is Hermès (which retains an average of over 80 percent of value at resale), followed by Chanel, Vuitton, Gucci and YSL (all over 60 percent on average). Goyard is also in the top quadrant.

On the other hand, if you wanted to go long on a bag stock, it turns out that Bottega Veneta is hovering at around 30 percent of its full price (Prada, Fendi and Valentino are close to 40 percent)

If you wanted to play the market, thus, you could buy a few vintage BV bags cheaply, betting that other people would see they weren’t selling for much and stop bringing them to market, which would make them relatively rare, which would raise the price — which would mean you could sell high.

Indeed, scarcity in the bag market, as in the sneaker market, is a large component of value. (Obviously, as with sneakers, the less used the better.) This is part of the reason that Hermès, which keeps its supply below demand and often creates limited-edition pieces, is so dominant. Which is where the Kardashians come back in.

Kylie is not, after all, the only family member with a purse closet. Kim has one, too, and their mother, Kris Jenner, has a Birkin closet. Given that she and her progeny have proven to be, like it or not, the defining family business of the last decade, it should not be a surprise that when it comes to bags, they were ahead of the investment curve.