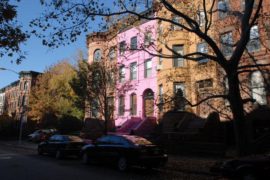 The abstract artist Sean Scully has striped his canvases in yellows from palest omelet to warning flare.

His choices have been uncontroversial — his paintings have sold for more than $1 million each — until last summer, when he went a shade too far on one of his own homes.

Mr. Scully, 73, specified Gold Zinger paint (from Valspar) for his turreted house built in the 1980s in Snedens Landing, an enclave in the hamlet of Palisades, N.Y., on the Hudson River’s western shore about 20 miles north of Manhattan.

In an oversight, his team did not file for paint color approval permits required by the local government’s Historical Areas Board of Review. At the board’s December meeting, some emotions ran high as the public debated whether Gold Zinger should be allowed to remain on the house.

Opponents deemed the color “over the top and jarring.” Mr. Scully’s team defended it as “bold, beautiful and uplifting,” suited to a woodsy neighborhood known as “eclectic, unique, artsy and individualistic.” (Celebrity inhabitants have included Orson Welles and Scarlett Johansson.)

The board nonetheless concluded that Gold Zinger had to go. This spring, it will yield to Semolina, a creamier yellow from Benjamin Moore.

Mr. Scully, in a recent interview, fumed over what he called “Pottery Barn” tastes among the locals who spurned Gold Zinger. Thomas Jefferson had applied a similar shade in Monticello’s dining room, he said, and it brought a cheerful note to his wintry leafless property. But he accepted Semolina as a compromise: “I don’t want war.” 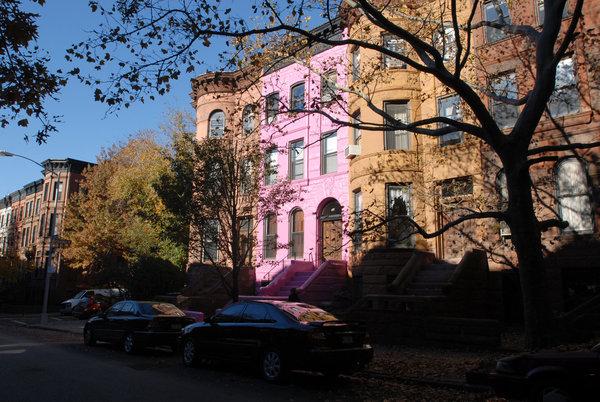 Pinkstone, which is now brown, stood out among its Park Slope, Brooklyn, neighbors in 2006.CreditAngela Jimenez for The New York Times

Color battles like these have grown common. Historic district administrators and other neighborhood design watchdogs have gained power over growing urban and suburban territories. Homeowners in aging subdivisions brave disapproval as they try to update association covenants, to brighten obsolete dark palettes while maintaining visual cohesiveness. Blog posts have drawn attention to extreme colors and suggested boundaries of good taste, while social media has made for open season on people’s house paint choices. Tantrums, lawsuits and nit-picking have ensued.

Regulations in Palm Coast, Fla., forbid “fluorescent, loud, clashing or garish colors or ANY SHADE of purple, fuchsia, magenta and orange that does not meet the pastel requirement.” In Wellington, Fla., homeowners have struggled to persuade authorities to add mouthwatering paint colors called oregano spice and cocoa berry to the official rosters of permitted hues. In Gaithersburg, Md., homeowners have landed in court for using excessively pale trim in a predominantly earth-tone subdivision — the house that generated the controversy is on Happy Choice Lane.

In Cody, Wyo., rule-breaking owners have spewed expletives while painting their home’s exterior in bands of “cafe gray, maroon rust, walnut bark and cinnabark,” the Powell Tribune reported. There are reports of a Louisiana resident’s yellow house being painted gray by neighborhood objectors while the owner was out of town. People have ranted online against the subjective judgments and excessive power of the “color police.” A petition arose to abolish homeowner associations, partly because of the threat of color dictatorship.

John Hammersmith, a community associations expert who owns Hammersmith Management in Colorado, said that board discussions of paint choices had been known to devolve into “yelling, screaming, almost fisticuffs.” He quoted a common saying in real estate: “You just don’t want to live next to a pink house.”

An early rendering of an East Harlem building by Karim Rashid showed brightly colored terraces. Opposition from the neighborhood led to a more muted palette.CreditKarim Rashid

Pink walls, however, do sometimes win hearts. In Brooklyn’s Park Slope neighborhood, there is nostalgia for a Victorian rowhouse formerly known as Pinkstone, at 233 Garfield Place. An owner had kept it coated pink for decades. Solange Knowles posed on its steps in a music video. Subsequent buyers have returned it to its original brown. (In Pinkstone’s memory, the Brooklyn-based accessories maker Dear Martian offers a “pepto pink cotton” bow tie named 233 Garfield.)

In East Harlem, the designer Karim Rashid’s team has slathered a bubble gum shade across cantilevered concrete terraces on a new apartment house at 329 Pleasant Avenue. Mr. Rashid’s original proposal had called for incorporating turquoise bands into the mix, but that high-contrast idea ended up shelved amid neighborhood outcry. In a recent interview, Mr. Rashid lamented widespread fear of brightly colored buildings. When we see unexpected shades, he said, “That’s when we feel alive.”

The original design for this East Harlem building by Karim Rashid included much brighter terraces, with bands of turquoise. After opposition from neighbors, the colors are more muted.CreditKaren Fuchs

Mr. Scully and his wife, the artist Liliane Tomasko, have recently expanded their real-estate portfolio with a sprawling 1920s house called Shadowcliff in Upper Nyack, N.Y. Its three-story wood and brick shell, trimmed in white neoclassical details, contains 37 rooms. Walter Aurell, an architect who has worked on several projects for the couple (including the Snedens Landing house), said that renovations at Shadowcliff were expected to begin in early summer. Discussions about the selections of exterior paint, he said, are ongoing.

Mr. Rashid says he foresees his afterlife in a place where palettes are infinitely expansive and gray walls very rare. “There’s a planet out there, I believe, that’s all so colorful,” he said, “and that’s where I’m going when I die.”

FacebookshareGoogle+sharePinterestpin it
Design Books That Explore History in the MakingQ. & A.: In Hubert Le Gall’s World, Reality and Fantasy Blend
Latest