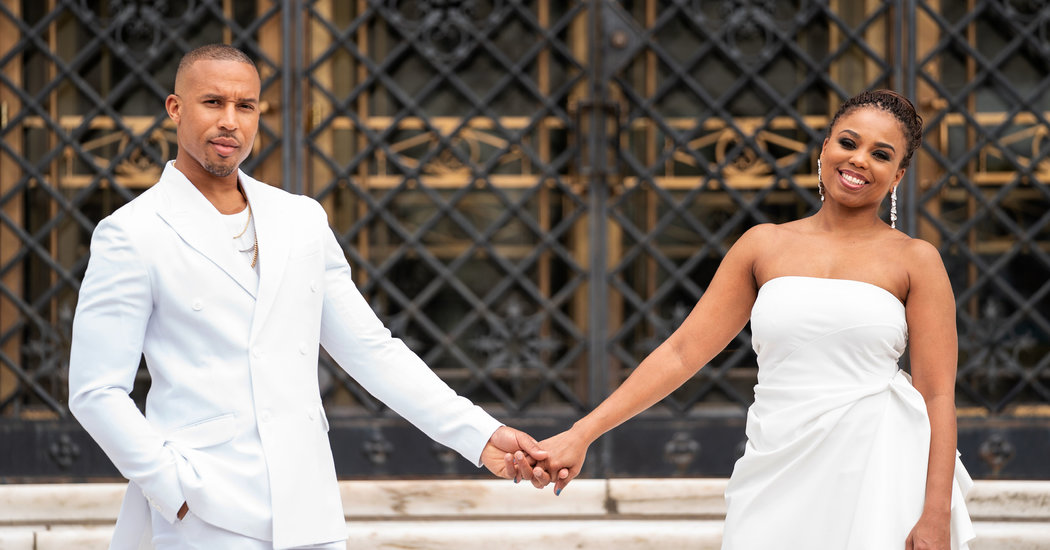 Jemele J. Hill and Ian J. Wallace are to be married Nov. 10 at the Monarch Beach Resort in Dana Point, Calif. The Rev. Rodney S. Patterson, a Baptist minister, is to officiate.

The bride, 43, is a journalist and podcaster. She is a staff writer at the Atlantic. From 2006 to 2018, she worked for ESPN, first as a national columnist and later as an anchor of the network’s “SportsCenter.” In 2018, she joined the staff of the Undefeated, an ESPN website that covers race, sports and culture. She graduated from Michigan State University.

She is the daughter of Denise Dennard of Novi, Mich., and Jerel Brickerson of Detroit.

The groom, 39, works in medical sales for Applied Medical, which is based in Rancho Santa Margarita, Calif. The groom also graduated from Michigan State. He is the son of Tanya Bailey of Detroit and Kelvin Wallace, also of Detroit.

“It was Sunday game day, I was tailgating, and I saw one of my buddies talking to Jemele,” Mr. Wallace said. He approached and introduced himself. “I’m a sports fan. I knew who she was, but I wasn’t fanning or anything.”

Neither remembers what they talked about during their three-way conversation with their mutual friend, Marc Armstrong, but both left feeling their chat had been flirtatious. “As soon as I saw Ian, what went through my mind was, he was attractive,” Ms. Hill said.

That night, both attended the same party. Neither had expected a second encounter. “Jemele had on this red dress, it was almost like a spotlight was on her,” Mr. Wallace said. They flirted again and this time exchanged phone numbers. The next day, he called to ask her out. But coordinating a date took some strategizing: Mr. Wallace was living in Myrtle Beach, S.C., and Ms. Hill was living in Connecticut while working at ESPN headquarters in Bristol, Conn.

After a few phone calls, they figured out they both had work trips to Orange County, Calif., scheduled the following week. “What are the odds?,” Ms. Hill said. They met at the hotel where Ms. Hill was taking part in a women’s empowerment conference. At the hotel bar, “all Jemele’s colleagues came over to check me out,” Mr. Wallace said. “I guess I got the thumbs up.”

In October 2018, both carved paths in their careers that allowed them to move to Los Angeles. A few months earlier, on a trip to Las Vegas, they had started talking about marriage.

News of that conversation got back to Jemele’s best friend, Kelley Carter of Los Angeles. Ms. Carter got in touch with Mr. Wallace to ask if he wanted help ring shopping.

“She sent her henchman to pressure me,” Mr. Wallace said.

Ms. Hill denies asking Ms. Carter to offer her services. “But I will say this,” she said. “I told Kelley, ‘If he ever comes to you for advice, what I want is a platinum solitaire.’ She was like, ‘I got you.’” For Mr. Wallace, buying the ring of her dreams meant blowing the budget his financial adviser recommended, but he didn’t care. “I didn’t listen because I’m in love,” he said.

On Dec. 26, Mr. Wallace arranged a helicopter tour for two of Los Angeles. “We had just gotten back from a vacation in the Cayman Islands, and I was like, Oh, man, I really don’t feel like going on this helicopter thing,” she said. But Mr. Wallace had mentioned the tickets were nonrefundable, and he asked if she would dress up because the tour company was planning to take promotional photographs that night.

When the helicopter touched down and a photographer started snapping pictures of the couple, Ms. Hill hadn’t caught on that his story was a ruse, and that he had hired an engagement photographer. Mr. Wallace got down on one knee and pulled the solitaire from one of his custom Michigan State socks.

“I was so floored I had to collect myself,” she said. “He got me good.”