Why Do You Love a L.O.L. Surprise? 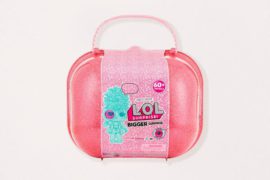 So, what is the L.O.L. Surprise! Bigger Surprise? It is a glittering, baby-pink plastic suitcase that one buys without knowing what’s inside. It is filled with doe-eyed plastic dolls and many sparkly accessories (including wigs, handbags and green tennis rackets) and each item is individually wrapped in enough plastic packaging to occupy a doll-size landfill.

It is also bigger than the L.O.L. Surprise! Big Surprise, which was the hot toy of last season, and with a promised 60-plus surprises, it contains the most trinkets of any toy in the L.O.L. Surprise! canon. The whole thing weighs 3.3 pounds and costs $89.99. It is made for children ages three and up — a population, I figured, that includes me. 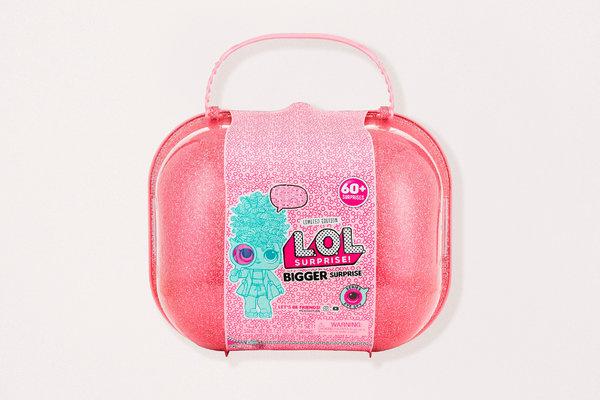 In November, L.O.L. Surprise! hosted a fashion show in Los Angeles. Celebrity child models — including North West, the daughter of Kim Kardashian West and Kanye West, making her “runway debut” — dressed up like the dolls, which have names like “Thrilla,” “Oops Baby,” and “Shapes,” and their famous parents shared every detail of the spectacle on Instagram. I carefully examined footage posted by Ms. West and Busy Phillips but still could not determine what, exactly, made L.O.L. Surprise! such a big deal.

Certainly, the dolls and their pets and accessories are clad in the mesmerizing jewel-tone color scheme that must be kryptonite to little girls everywhere (see: Lisa Frank, Limited Too in the ’90s). But the real fun of L.O.L. Surprise!, according to the brand, is the drawn-out experience of unwrapping the gift. MGA Entertainment, the toy company behind Bratz dolls, launched the L.O.L. Surprise! franchise two years ago in a bid to capitalize on YouTube’s unboxing trend, and there are now many videos of children (and more adults than one might expect) employing L.O.L. Surprise! toys for that very purpose. It’s brilliant marketing.

The package that I ordered arrived in a box bigger than my head. I feverishly ripped into it, and encountered dolls (one, wearing a shiny pink diaper and swaddled in layers of wrapping; others, encased in baby-blue orbs and carrying sunglasses and miniature to-go cups), along with tons of tiny wrapped boxes, many with Lewis Carroll-esque tags like, “PICK ME!”, “UNBOX ME!”, “ME FIRST!”, and the more unsettling “LET ME OUT OF HERE!” The items crying out for freedom included a shimmering Britney Spears-style newsboy cap and a hot pink crop top that read “MEOW.”

Were these good collectibles? I wasn’t sure. According to the L.O.L. Surprise! website, all of the items — surprises — sit somewhere on a Pokemon-style rarity spectrum, from “ULTRA RARE” to “FABULOUS,” which may as well be “BASIC.” The doll “Baby Next Door,” for example, is ULTRA-RARE. The “Thrilla” doll, meanwhile, is FANCY, which is just one step up from FABULOUS.

There was little in the way of discernible narrative. (Are the dolls friends? Sisters? Aliens? Hard to say. They are only grouped in terms of rarity.) But from three “secret clues” in the package, I learned that the dolls (and I, by extension) were on a mission to find a missing pet. The dolls are identified as “secret agents” so I guess it’s all part of their job. One of the tiny items — a plastic pizza box, stamped with “PizzaBFF.com” — led me to a website that shed a bit more light on the story: The dolls were diverted from a “top secret mission» when their cat went missing, and the search to get it back took them through both a pizza place and a wig shop called “Unbeweavable.”

Some time into the third layer of the suitcase, I unwrapped a spotted cat with its own disc-shaped litter box, sand included. This, I gathered, was how I solved the mission.

Allegedly, the many dolls and tiny unboxable trinkets in my L.O.L. Surprise! weren’t meant to make me, or anyone else, L.O.L. in the traditional, internet sense of the term. L.O.L. stands for Little Outrageous Littles, though that detail is not listed anywhere on the L.O.L. Surprise! site. The items are little, yes, but outrageous little, in a descriptive sense, feels like a stretch. If there is outrage, it should be directed at the amount of plastic wrap; after unwrapping 60-plus items, I had filled a small kitchen trash bag with packaging.

The L.O.L. Surprise! took me exactly 59 minutes to fully unbox. It was an experience both interminable but also not nearly long enough to quench my newfound need to unwrap even more.