Why Barbie, a Blimp and a Wienermobile Are Posting on Airbnb 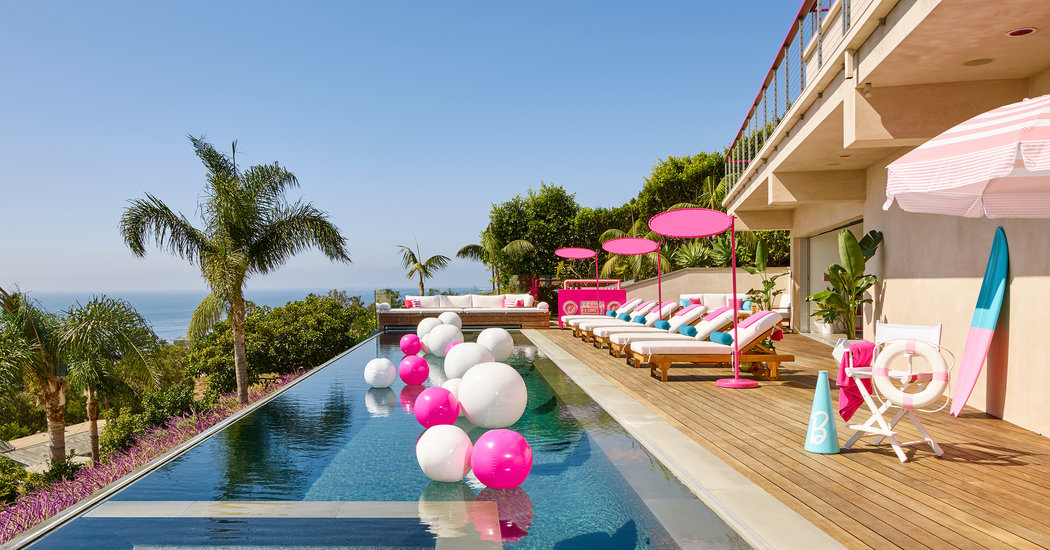 It was a warm August evening in Evanston, Ill., just north of Chicago, when the Wienermobile rolled out the red carpet for a sleepover.

Actually, the carpet was green, and not so much carpet as artificial turf. Inside the Wienermobile, the meat brand Oscar Mayer’s signature marketing machine, there was a pullout bed and a mini fridge. There were hot dog sunglasses, hot dog onesies and actual hot dogs with all the accouterments. (But no ketchup: Chicago doesn’t really do hot dogs with ketchup. It’s a thing.)

It was the first time a Wienermobile had been repurposed for paid lodging, the result of a collaboration between Oscar Mayer and Airbnb, the home-sharing platform that has increasingly tried to woo customers by promising adventure as well as accommodation.

If the Wienermobile stunt sounds familiar, it may be because Airbnb has entered into similar collaborations since then. The Goodyear blimp welcomed Airbnb guests last month. A life-size version of Barbie’s Malibu Dreamhouse opened its doors last week. And Downton Abbey — that is, Highclere Castle in Hampshire, England — will take two lodgers this month.

All of those offers were part of a marketing campaign at Airbnb, and all of them made news headlines. That was no accident.

“I think a lot of brands, in the future, they need to be in the business of making news, not just advertising,” said Brian Chesky, Airbnb’s chief executive. “And to make news you have to do something that is worth somebody reporting about.”

The first of those collaborations was with Oscar Mayer, a brand owned by Kraft Heinz. Bonnie Rosenberg, 32, a Chicago resident, stayed in the Wienermobile on Aug. 1, its first night as a hotel. She knew the whole thing was a marketing ploy for Oscar Mayer and Airbnb. But it all seemed so campy, nostalgic and fun.

“I saw an article on Twitter from The Chicago Tribune covering it, and I was like, jackpot,” she said. “I definitely want to do this.”

Ms. Rosenberg said she and her husband, Bill Welense, 36, had a good time leaning into the absurdity of it all. “It was really surreal, I have to say, because it was set up like a movie set would be,” she added.

The Wienermobile and similar lodging opportunities were available on a first-come-first-served basis, and only for a few nights. So while millions of people read about them, not many were able to book them.

That scarcity can be effective for companies seeking news coverage, according to Ron Berman, an assistant professor of marketing at the Wharton School. “It needs to be more of an interesting story — let’s call it an aspirational experience — than an actual experience,” he said.

While getting the right kind of attention is difficult, news reports that link brands with interesting opportunities can make for excellent marketing, Professor Berman said. And New York Times reporters who write about those marketing tactics could be helping the brands even more.

But Airbnb, which has been valued at about $30 billion, is worth watching as it expands beyond lodging and into the more nebulous realm of experiences. The platform has already asserted itself as a disruptive force in the hotel and real estate industries — clashing with cities, neighborhoods and residents in pitched legal battles at almost every step of the way. And last week, after a shooting at a rental property that killed five people at a Halloween party, Mr. Chesky said on Twitter that Airbnb planned to crack down on “party houses.”

In Malibu, Calif., the Barbie mansion didn’t really exist as such until Mattel teamed up with Airbnb to promote the Barbie brand’s 60th anniversary. Adorned with pops of pink specifically for last week’s booking, the property was open to four people for just two nights. Still, it earned news media coverage from CNBC, The New York Post and Fox News.

“We felt that this partnership with Airbnb would be a really fun and relevant way” to reinforce Barbie’s place in popular culture, said Lisa McKnight, the global head of Barbie and dolls for Mattel.

Some brands were approached by Airbnb to create the experiences that made news headlines or caught fire on social media. But others, Mr. Chesky said, were beginning to seek listings independently.

Jim Beam, which makes bourbon in Kentucky, offered limited stays at a century-old cottage on the company’s distillery grounds in Clermont as part of its own marketing plan, said Dan Cohen, a spokesman for Beam Suntory, Jim Beam’s parent company.

“We’ve always thought about potentially bringing in some of our fans to experience such an authentic and intimate and unique experience in our distillery by allowing them to stay in this house,” Mr. Cohen said.

(Only two one-night stays at the cottage were available on Airbnb — one this month and one next month — and both were quickly booked.)

This summer, Airbnb, founded in 2008, introduced a high-end rental tier, Airbnb Luxe, for users to rent villas, lodges or castles for thousands of dollars a night (give or take). The company also offers Experiences — activities with Airbnb hosts — and Adventures, like surfing, sailing and foraging.

It plans to go public in 2020, something employees have been pushing for. Mr. Chesky declined to comment on whether the company would do an initial public offering or a direct listing.

A marketing blitz would make sense for a company preparing to go public. And while Airbnb’s spending this year is in line with past patterns, Mr. Chesky said, 2019 has been “an investment year.”

For the few lodgers who have been able to take advantage of the recent marketing campaign, the investment has paid off. The couple who booked the Goodyear blimp on its first night got engaged during their stay. And for Ms. Rosenberg, the Wienermobile was definitely a once-in-a-lifetime experience.

“I think it was unique from any other Airbnb that I’ve encountered,” she said.

FacebookshareGoogle+sharePinterestpin it
Scientists With Links to China May Be Stealing Biomedical Research, U.S. SaysThe Best Chili Recipe Is Yours
Latest