Who Would Firebomb a Homeless Encampment? 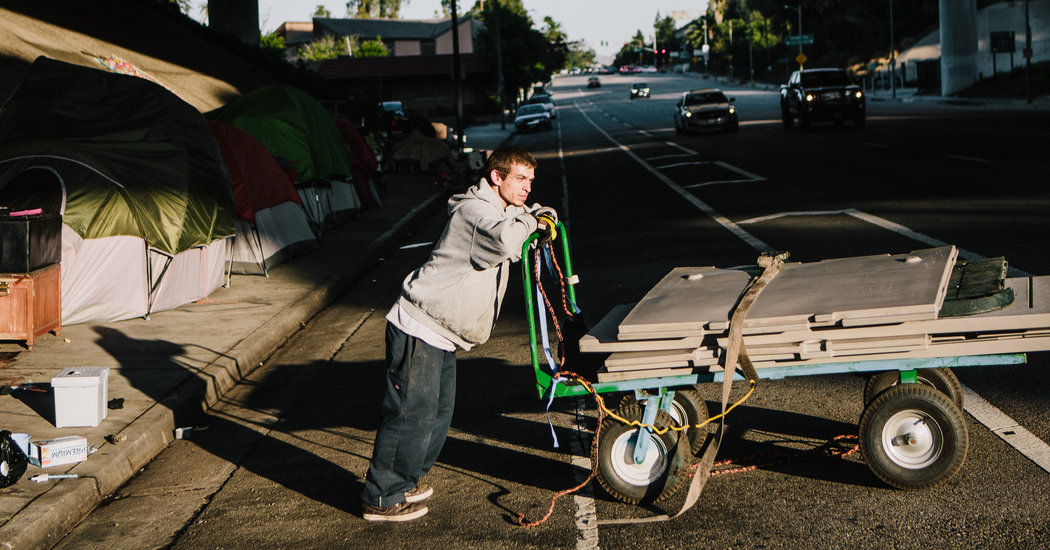 LOS ANGELES — The incendiary device came shooting toward the homeless encampment without words or warning. Arthur Garza, 29, heard a pop against his tent, then saw the object, which he described as a “mortar” or “firecracker,” bounce into the street and explode.

“It was like shooting stars everywhere,” Mr. Garza said.

In a matter of minutes, flames were climbing the incline of dirt and brush under the interchange of the 2 and 134 freeways in Eagle Rock, Los Angeles. Stray embers jumped eight lanes of highway to ignite land in the adjoining city of Glendale.

Mr. Garza and others in the encampment acted quickly, setting their water supply on the flames and raking brush to halt the fire’s spread. They were aware and worried, Mr. Garza said, that the homeless might be blamed. Ultimately, some 300 firefighters and multiple water-dropping helicopters were deployed to hold back the blaze. A hundred homes were evacuated, though no structures were lost. Forty-five acres burned.

Encampments like Mr. Garza’s have become firm fixtures of L.A.’s landscape as the homelessness crisis gets steadily worse. Now, with fire season underway, city officials are growing anxious about the uptick in blazes that start in makeshift communities. The city is technically barred from removing homeless people from public areas. But last month, the L.A. City Council passed a safety measure that allows for the arrest of homeless people who refuse to leave high-risk fire zones.

The case of Eagle Rock, however, shows that the threat can also come from outside the camps.

It was a shock to the middle class community of Eagle Rock. Mr. Nogueira is the son of Michael Nogueira, the president of the Eagle Rock Chamber of Commerce and a big booster of the local farmers’ market and Concerts in the Park series. The elder Nogueira is known around town as “Sir Michael,” the name of his party-rental business, and his family home, surrounded by a white-picket fence, has been well known for its elaborate decorations each Halloween and for hosting rollicking gatherings on boxing match nights.

Announcing the arrests in a sternly worded release, the L.A.F.D. said investigators used “burn patterns, witness statements and surveillance videos” to identify its suspects. The department “determined the fire was an intentional act” and said the homeless were the targets. No motive was mentioned.

The job of the L.A.F.D.’s arson investigators is even more challenging in a climate-changing California: the threat of devastating fires has essentially gone year-round. The unit was founded as the Arson Squad in 1918, and a century later, is known as the Arson/Counter-Terrorism Section, an evolution that officials said has become necessary to confronting threats in a world beset with climate change and terrorism. In the fall and early winter, the danger becomes more potent. The dry Santa Ana winds scream across the basins, and the sun seems to burn meaner, capable of igniting dried-out growth at the slightest provocation.

In this case, firefighters stayed at the burn zone for two days to make sure it was completely extinguished. “We remember the Oakland Hills fire, which killed 25 people,” said Brian Humphrey, a spokesman for the Los Angeles Fire Department, referring to the 1991 Bay Area firestorm that started after embers from a fire put down a day before reignited in heavy winds.

The day after his arrest, the younger Mr. Nogueira posted $1 million bail. Mr. Araujo-Cabrera was released on Sept. 14. The Los Angeles District Attorney’s Office has not formally charged either with any crimes. A spokesman for that office said the D.A. is requesting further evidence. The Nogueira family declined to comment.

One of the arson investigators, L.A.F.D. Captain Tim Halloran, said he could not to discuss details about the incident, citing the ongoing inquiry, but made it clear that department will keep pursuing charges.

“Obviously it’s our desire to bring the perpetrators of this crime to justice,” Captain Halloran said.

This summer, homeless-encampment-related fires also sprung up in Pacoima, where an abandoned house taken over by squatters burned for a second time; in South Los Angeles, where an encampment in an alley burned, badly damaging a house; and in the Sepulveda Basin, where about 100 people were living, some for many years.

The uptick, generally, is undeniable. Mr. Humphrey, of the L.A.F.D. said, “In the number of fires related to homeless encampments, in which the homeless are present — whether they are the cause is not certain — the answer is yes, we are seeing an increasing trend.”

But in three fires in September alone, all of which left unhoused people dead or seriously injured — in Van Nuys, Glendale, and in South L.A. — arson is suspected. In late August, an unhoused musician in downtown L.A.’s Skid Row was targeted in an arson attack and died days later. And the Los Angeles Police Department is currently investigating a case, in Echo Park, in which an explosive device was thrown at a homeless encampment on Oct. 6.

The Rev. Andy Bales, one of the most respected homeless advocates in Skid Row, and chief of the Union Rescue Mission, said the rise in attacks on homeless Angelenos is inexcusable, but sees it as a raw reflection of the dissatisfaction with official efforts to alleviate the crisis. Every night, despite billions of taxpayer dollars poured onto the problem, nearly 59,000 people sleep on the streets of Los Angeles County. The countywide homeless count rose 12 percent over the past year.

“Unfortunately, some folks that have twisted thinking are getting so angry about the situation,” Rev. Bales said. “This has become absolutely a growing concern, fanatical vigilantism.”

Rev. Bales said he supervises a Facebook page related to homelessness concerns, “and more and more people are calling for others to arm themselves, saying things like, ‘Round them all up like cattle, and ship them either to Mexico or the desert.’”

“I can’t tell you how many posts I have to delete,” he said.

Makeshift habitations are everywhere — set up under or near freeways, in ravines or canyons and creek beds, and on public land away from view. Eventually, some encampments are pushed onto the sidewalks, where a cat-and-mouse ritual ensues with sanitation workers.

One of the persistent myths about the homeless is that they are largely from out of town, a sort of foreign invasion. Yet, the Greater Los Angeles Homeless Count finds that roughly two thirds of unsheltered adults have lived in L.A. County 10 years or more.

And the difference between those on the street and those in permanent dwellings can be a matter of degrees. For example, as it happens, the younger Mr. Nogueira was arrested for attacking an encampment that houses a former neighbor. Arthur Garza’s last home address was three houses down from the place where the Nogueiras live now, on Eagle Rock’s tony Hill Drive.

Back Under the Freeway

Mr. Garza is back in the place he currently calls home, under beams holding up sheets of vinyl tarp, strung up along tents and umbrellas. The freeway traffic overhead creates an unending droning noise.

Living on the streets, homeless people in L.A. often fall victim to sexual assault, mental illness or drug addiction. Mr. Garza has faced multiple arrests since becoming homeless, county jail records show. Some were related to narcotics, he said. “I basically never had any police contact until I started living on the street.”

He was kicked out of his last formal address by relatives in 2014, he said, in what he described as a dispute over an inheritance. (Repeated attempts to contact Mr. Garza’s relatives at his old Hill Drive address were unsuccessful.) He has been living on the streets ever since.

These days, Mr. Garza works part-time for a small upholstery tools manufacturer, just a few doors away from where he sleeps. Jerry Preusser, the shop owner, spoke effusively about his employee’s work ethic, and he said that he’s tried to offer Mr. Garza a room in his home.

“I’ve helped him a lot and he’s done a lot to change,” Mr. Preusser said. But habits, he added, are hard to break, and the cycle of homelessness itself becomes an anchor: “You don’t imagine your life out of that.”

Although they once lived on the same block, Mr. Garza said he and Mr. Nogueira didn’t know each other growing up. But he’s long been aware of the Nogueira family. When he heard that Daniel Nogueira was arrested, Mr. Garza recalled saying, “That’s Sir Michael’s son.”

Mr. Garza said his conditions overall have not changed. Drivers routinely throw trash at him or honk aggressively. L.A. sanitation sweepers come by, threatening to haul off his property if he doesn’t move it. Mr. Garza carts his stuff to other locations, and then back. He zips around Eagle Rock on an electric longboard, and keeps two guinea pigs as pets.

“I’m not complaining about being homeless,” said Mr. Garza. “The winters are cold, the summers are hot, constant noise. That’s why we were back up there, because it’s quieter,” he said, pointing to a cluster of trees and bushes set against the side of the freeway.

Now a fence blocks his path. “Right here,” he said, “everything echoes.”