Who Wants to Save the Las Vegas Wedding? 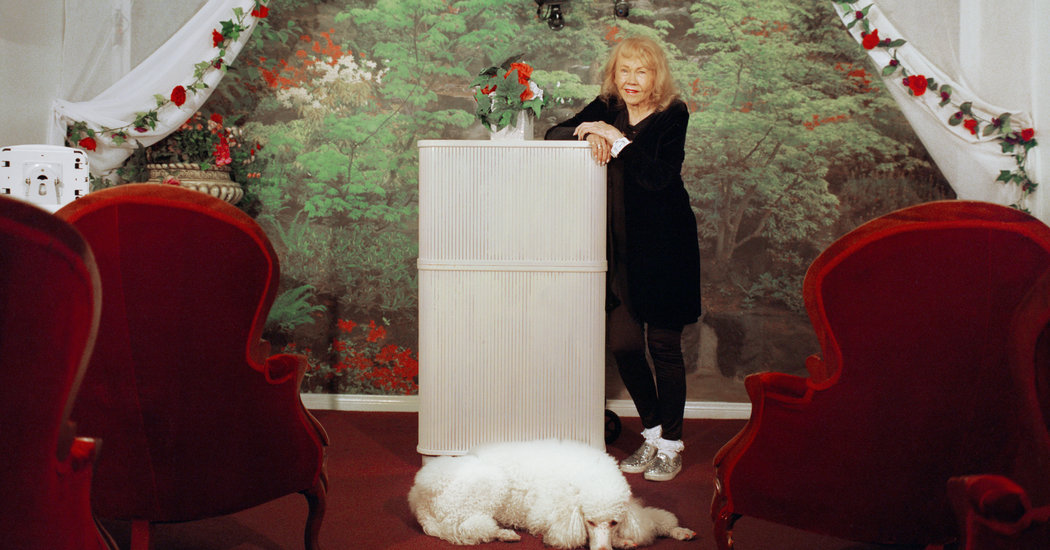 LAS VEGAS — On Las Vegas Boulevard, nestled between a motel and tattoo parlor, sits what may be the most famous marriage site in the world: A Little White Wedding Chapel.

Charolette Richards, the chapel’s owner and an originator of the 10-minute wedding ceremony, said she has had her hand in more than 50,000 weddings — in the drive-through window alone — since 1991. The weddings of Frank Sinatra, Judy Collins, Bruce Willis, Michael Jordan and Britney Spears rank among her more notable ceremonies.

She is 86, and, after almost seven decades as the queen of the Las Vegas wedding chapel business, Ms. Richards has put her world-famous site up for sale. Her asking price is $12 million. “I’m retiring soon,” she said, with an expression equal parts saddened and relieved.

The chapel, though, has been on the market since April. And the Las Vegas wedding industry is not the business it used to be. Despite the fact that Las Vegas wedding tourism generated an impressive estimate of $2.5 billion in economic activity last year, according to Lynn Goya, the clerk of Clark County, Nev., that number is at least a billion dollars down from the revenue generated at the industry’s height.

“We’re at about half of what we were at our peak,” Ms. Goya said. “We can’t afford to take our No. 1 status for granted.”

Ms. Goya rounds up the numbers when discussing the toll on Las Vegas’s wedding tourism industry at large, which employs more than 10,000 people. There were 74,534 marriages performed in Clark County in 2018, down 42 percent from the record in 2004: 128,238 marriages.

The sale of Las Vegas’s most iconic chapel, that pinnacle of shameless kitsch and Amour Americana, accompanied by fewer people marrying in Las Vegas, presents an obvious question: Can an industry whose hook is being stuck in the past flourish in the future?

All you need to get married at the chapel, or anywhere in Las Vegas, is $77, a photo ID and be 18 years old. Great Depression-era legislation allowed for hasty lovers to bypass the usual blood tests and waiting periods and get married within a matter of hours.

For 68 years, 365 days a year, Ms. Richards has been the gatekeeper of an industry built on easing elopement. In fact, it was her entrepreneurial ingenuity that led to the creation of the famed one-stop-shop business model, which became the standard on the Strip.

But it’s no secret that marriage rates in the United States have dwindled significantly in the wake of the 2008 financial crisis, and that shifting social values coupled with the burdens of student debt have made tying the knot for millennials unfeasible or unappealing, and sometimes both.

“I don’t know what the longevity of the wedding industry is,” said Ron Decar, 61, the owner of the Viva Las Vegas wedding chapel, a three-minute walk down the boulevard. Although he was wearing his full Elvis get-up, complete with a bedazzled jumpsuit and black pompadour, his tone was gravely serious.

“March was the 20th anniversary of our being in business here in this location, doing the exact same thing we did 20 years ago,” Mr. Decar said. The chapel’s numbers and revenue, he said, have been decreasing each year for more than a decade.

Peek in on an average day and you are likely to witness Mr. Decar emerge from a vertical coffin to officiate a ceremony in a chapel flooded with fog and tombstones. Gothic is one of the most popular themes.

“How many chapels do you know that fly vampires from the ceiling?” he asked triumphantly. Viva Las Vegas performs 2,500 to 25,000 weddings a year, depending on the year, and Mr. Decar has performed half of those as Elvis, James Bond, the Grim Reaper, the Godfather “or whatever else the customer wants,” he said.

His 40,000-square-foot building is the largest free-standing chapel on the Strip. The flamboyant site, once a hotel, has been converted into a wedding complex, complete with a wig-filled costume shop, a 1950s diner for doo-wop ceremonies, and a prop room filled with artificial flowers and all the spray paints used to color them.

Viva Las Vegas is capitalizing on the current saving grace of the industry: vow-renewal ceremonies, which make up half its business.

The tourism industry markets renewal ceremonies aggressively, as yet another fun Vegas activity, and they are proving to be a sustainable way to maintain numbers at the wedding chapels. If millennials aren’t getting married, the reasoning goes, why not convince Gen Xers and their elders to simply wed again?

“People want to do something fun the second time around,” Mr. Decar said. “You know, people worry what their mom will think, but when you’re renewing, the pressure’s off. It’s all about fun.”

Jamie Richards, 58, who is an owner of Viva Las Vegas (and who is not related to Charolette Richards), said that younger and smaller venues — like the Little Neon Chapel, where wedding prices start at $49 — pose an additional threat to their own survival.

“New chapels downtown are really cutting prices and making it difficult for the established chapels,” Mr. Richards said. “A lot goes into maintaining brick and mortar, compared to, say, a cubicle.”

The ease of becoming an officiant through online sites has lowered the barrier of entry for those able to perform ceremonies. Mobile officiants, unburdened with the high costs of venue maintenance, can offer more competitive prices, pulling crowds from the classics on the Strip.

The Old Bricks and Mortar and Ball and Chain

Back at a Little White chapel, Charolette Richards inched her way across her expansive property, pointing to the many facets of her chapel: a flower shop (once, she said, the biggest flower shop in Las Vegas), a tux and gown rental department, a limousine fleet and multiple marriage sites in addition to the main altar.

Employees buzz around the grounds, juggling a constantly ringing phone with a stream of walk-ins, and solving problems as they arise — the flowers are wrong, the dresses don’t fit, the limo driver’s car broke down.

Unaffected by the chaos, Ms. Richards draws attention to her favorite touches: a mural that depicts frogs kissing, corkscrew-shaped topiaries and a plastic life-size, horse-drawn carriage. “Everything I love is love,” she said.

Her waiting room is filled with a diverse array of couples. A pair in cowboy hats sits beside a man with one leg and his wife-to-be. Across from them stands a same-sex couple next to a pair speaking Mandarin.

Ms. Richards makes her grand entrance and begins distributing her complimentary “Recipe for a Happy Marriage,” which includes “2 heaping cups of kindness,” “4 armfuls of gentleness” and “1 lifetime of togetherness.”

Ms. Richards pointed to it with elation, and then sat beside her assistant, who rattled off a number of challenges to address: the sudden death of a bride, a renewal ceremony for six couples at once, the hazards of putting pearl pins in bouquets. Ms. Richards paused business matters to explain that Joe Jonas and Sophie Turner were married in this building several weeks earlier.

Dee Dee Duffy, 55, is the owner of Graceland Wedding Chapel, a two-minute drive down the road. She assured a visitor: “We do not do zombie weddings here.”

Rod Musum, 52, the chapel’s vice president, said his chapel is the originator of the Elvis-themed wedding. “We have one of the more quaint, picturesque chapels on the strip,” he said. “We know what our niche is and what we’re good at.”

Their chapel is marked by blue and white gates, exact replicas of the ones outside Graceland. They too are navigating through a lull in the business, but their numbers remain steady.

The bread and butter of the company is a seven-minute Elvis-themed ceremony, which may seem dated. But Ms. Duffy and Mr. Musum attribute their survival of the wedding drought to a personalized approach.

Witness a wedding or 10 there on any given day and you may be surprised to the point of tears by the sincerity of the quickie ceremonies, even in this most saccharine environment.

The Graceland team said that overcoming the quickie stereotype is their greatest challenge. Industry professionals agree that widening global perceptions of Vegas weddings will prove essential in the quest to capture younger markets.

Ms. Duffy and Mr. Musum would like you to know that their weddings are sincere, and that impulsivity contributes to only a fraction of the business.

“Every single day, someone walks in and asks if ‘The Hangover’ was filmed here,” Mr. Musum said. “It’s just not realistic. The business isn’t 24 hours anymore. The graveyard shift ended in 2006, so we rarely get people stumbling in intoxicated, asking to get married.”

“Frankly, it’s illegal to issue a license or marry someone if they’re drunk, otherwise it would be void in a court of law,” said Ms. Goya, the county clerk. “It’s our job to ensure both parties are capable of signing what will likely be the most important legal contract of their lifetime.”

Daniel Vallance, 44, is the director of operations at the Little Church of the West. “We’re a venue that has bookings into 2023,” he said.

The humble structure, modeled after a 19th-century church in an old mining town, was built in 1942 and is thought to be the oldest standing structure on the Strip. The floorboards creaked beneath Mr. Vallance’s feet as he explained the elements of the steady growth of his business, an enviable anomaly in a difficult time.

“People getting married are in their 30s now, which means they have more financial leeway,” Mr. Vallance said. “They don’t want to spend 50 bucks to get married by a fat drunk Elvis. They want something more elegant, and that’s the approach we take and have taken for 76 years.”

Tucked behind vintage candelabras in Little Church of the West are hidden cameras for live-streaming, the mark of a business that has managed to preserve its traditional appeal while adapting to modern demands.

Aside from incorporating cutting-edge technology (Mr. Vallance said he is already looking into virtual reality), the Little Church of the West has made strides to better cater to international couples. The simple act of making its website available in different languages has helped a lot.

“You want to know what the future of the wedding business is?” Mr. Vallance said. “Listen to the brides and be receptive to what they want.”

Venues like the Chapel of the Flowers, the Thunderbird and Paradise Chapel are undergoing major aesthetic renovations. They face the challenge of conveying modernity while maintaining the vintage Vegas feel.

“We want people to know that we’re changing with the times and responding to the new customer,” Ms. Goya said. “The industry is now working together instead of against each other, because we have an opportunity to redefine a global brand.”