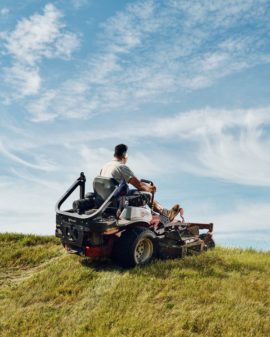 It takes a crew of eight to maintain the 500 acres at Storm King Art Center, where art lives in the landscape. 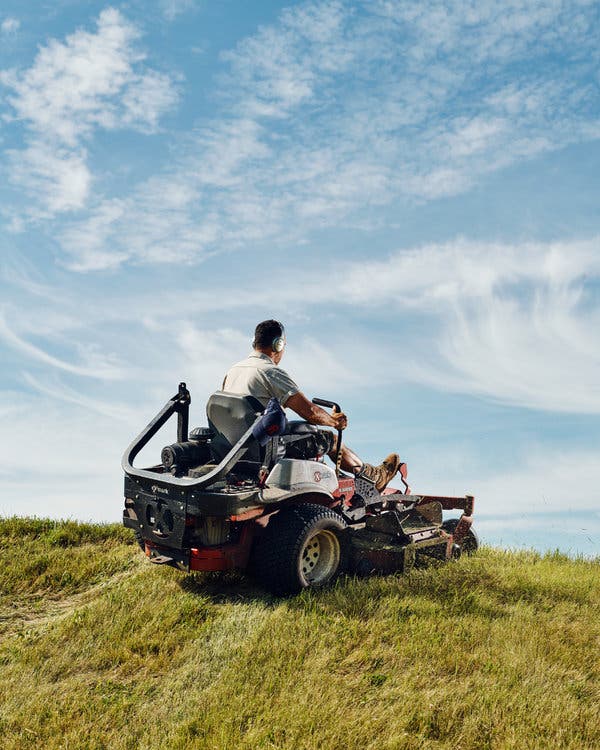 Maya Lin’s “Storm King Wavefield,” (2007-08) gets a haircut.CreditThomas Prior for The New York Times

Joel Longinott and Robert Finch dig a hole for a new installation. Mark di Suvero’s “Figolu” (2005-11) sits in the background.CreditThomas Prior for The New York Times
Armando Ocampo working on Louise Nevelson’s “City on the High Mountain,” 1983.CreditEstate of Louise Nevelson/Artists Rights Society (ARS), New York; Thomas Prior for The New York Times

Storm King Art Center isn’t a museum, exactly. Instead of hanging on white walls or resting on pedestals under track lighting, the art here is nestled amid 500 acres of verdant hills, exposed to the ever-shifting and unrelenting climate of New York’s Hudson Valley.

The surrounding landscape frames the pieces in ways that squares of gilded wood never could. At the property in Cornwall, N.Y. the color of Mark di Suvero’s “Mother Peace” can be appreciated alongside the matching hue of local Red-winged Blackbirds and the plastic dynamism of sculptures like Jerome Kirk’s “Orbit” (1972) is only heightened by the darting of rabbits nearby.

Even on a riding lawnmower, it can take a whole day to trim all 240,000 square feet of “Storm King Wavefield.”Credit

Mike Seaman and his seven-person facilities crew are the stewards of this complex, evolving environment. They keep the carefully sculpted lawns mowed, the trees trimmed and the sculptures clean and intact. When a hole needs to be dug, they perform the excavation. When something needs to be fabricated, they’re the ones to do it.

Seaman, who has worked at Storm King for almost 30 years, is modest about the role he and his crew play at Storm King. He would rather, it seems, talk about chemical reactions than about himself. You have to use distilled water to refurbish certain sculptures, he explained, because otherwise contaminants can leave blemishes behind. Sculptures that tend to be touched by visitors (touching is not allowed but happens sometimes) need special attention, because the oil on human hands can damage their patina. Wax, used to protect some pieces, should be applied sparingly, because it can catch pollen and dust.

He sounds like one-part high school science teacher and one-part medieval alchemist. When he lights up a blowtorch in the summer heat to retouch Nam June Paik’s “Waiting for UFO” (1992), he transforms into a master craftsman — careful, deliberate, attuned to his instrument.

Seaman sees himself, primarily, as a facilitator and mediator between artists and curators and the demands of nature. When installing a new piece, his aim is to “help actualize” the center’s artworks by placing them in the environment in the “least invasive” way possible. Disturbing the site’s plants and wildlife is always avoided when it can be.

“For us, you can’t just impose something on the landscape,” said Nora Lawrence, a senior curator at Storm King. That’s not only because it goes against the center’s artistic and environmental commitments. There are also practical constraints to consider, and Seaman’s team knows the property’s weather and topography intimately. Sometimes, Lawrence explained, artists have to be told things like, “‘that’s going to flood’ or ‘we can’t possibly create something that deep in the ground’ or ‘if we dig there we’re going to hit a boulder.’”

Zhang Huan’s “Three Legged Buddha” (2007) sits in a puddle after a busy and rainy weekend.CreditThomas Prior for The New York Times

At a place where the art is meant to interact with its surroundings, even basic maintenance work has a big impact. When a member of the crew mows Maya Lin’s “Storm King Wavefield,” they’re not just keeping the grounds neat. They’re also participating, along with the site’s natural forces, in the re-creation of the artwork. And cleaning Alyson Shotz’s “Mirror Fence” so it can reflect the faces of visitors and the surrounding foliage isn’t only good housekeeping. It’s necessary for the piece to function in the way it was intended.

Seaman and his team are also integral to ensuring that Storm King is environmentally friendly and hospitable to the local wildlife. In 2012, they planted six acres of local grasses and wildflowers to attract more endemic birds and insects. Six more acres followed the next year, seeded with grass and forb suited to the microclimates within the site, and there have been several more such planting projects since. Seaman is currently preparing to replant the area near “Mother Peace” with more flora native to the Hudson Valley.

After working there for decades, “watching Storm King evolve over time,” Seaman said, is what he’s most enjoyed about his career. During his tenure, he has seen saplings flourish, new species of animals visit and major artworks added. Day-trippers might not catch the subtle changes that unfold over years, but despite Storm King’s vastness, Seaman still encourages visitors to slow down to “look at small details.”

Thomas Prior is a New York-based visual journalist. Peter Libbey is a News Assistant on the Culture desk.

Surfacing is a weekly column that explores the intersection of art and life, produced by Alicia DeSantis, Jolie Ruben and Josephine Sedgwick.