Who Are Online, Recruited by Advertisers and 4 Years Old? Kidfluencers 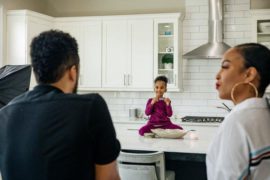 Samia was an influencer before she could talk.

Her parents, Adam and LaToya Ali, are influencers themselves and began chronicling Samia’s impending arrival on YouTube and Instagram in 2014, once Ms. Ali learned she was pregnant.

“Samia’s birth video is on YouTube, so she’s pretty much been born into social media,” Mr. Ali said.

Samia is now 4 and has 143,000 followers on Instagram and 203,000 subscribers on YouTube. Her feeds are mostly populated with posts of her posing and playing, but they also feature paid promotions for brands like Crayola and HomeStyle Harvest chicken nuggets.

There are instances when “Samia can’t verbatim get the message out,” Mr. Ali, who lives in the Atlanta area, said of the promotional posts. “Sometimes, their talking points are not kid talk, so LaToya would need to appear, or myself, to relay those because those are key deliverables that the brands want.”

Welcome to the world of kidfluencers. Brands have flocked to influencers — individuals, famous or not, with large followings on social media — for years, hoping their online popularity will prompt their fans to buy the products they vouch for. Then child influencers started appearing on their parents’ profiles, a surreal but seemingly harmless offshoot of this phenomenon.

Now, advertisers like Walmart, Staples and Mattel are bankrolling lucrative endorsements deals for toddlers and tweens with large followings and their own verified profiles on YouTube and Instagram. As a result, children too young to make their own accounts on the platforms are being turned into tastemakers.

Instagram, owned by Facebook, and YouTube, which is part of Google, are designed for adults in large part because of a federal privacy law that protects children under 13. Bios for many of the younger influencers on Instagram note that the pages are “run by parents,” and YouTube channels are presumably registered to their guardians. 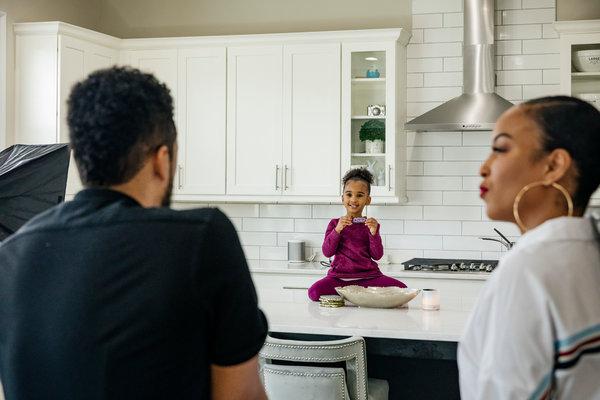 “Samia’s birth video is on YouTube, so she’s pretty much been born into social media,” Mr. Ali said. CreditAudra Melton for The New York Times

Because they say their platforms are 13-and-older zones, technology companies do not have to comply with federal rules that limit targeted advertising and data collection. But Josh Golin, executive director of the Campaign for a Commercial-Free Childhood, said the companies had no incentive to keep children off the sites.

And as TV ratings continue to fall and children spend more time online, advertisers are spending more money to reach them there.

“The fact that brands are using actual children as influencers is a very clear sign that they’re targeting children that they know are on these platforms,” Mr. Golin said.

That can mean big money for the families of kidfluencers. Kyler Fisher, the father of 2-year-old identical twins who have more than two million followers on Instagram, said a sponsored post on the girls’ account could fetch between $10,000 and $20,000.

The twins, Taytum and Oakley, have promoted car seats and Carnival Cruise Lines on Instagram. They are also central to the success of their parents’ YouTube channel, Kyler & Mad, which has about three million subscribers. Promotions on the family YouTube channel can draw $25,000 to $50,000.

Fans are so interested in the family that their third child, due the first week of March, already has 112,000 Instagram followers.

“My kids complete the package, man,” Mr. Fisher said. “If we didn’t have the girls, I can’t imagine being as far as we are.”

Another parent shared the prices commanded by the parent’s child on the condition of anonymity, citing concern that the disclosures could harm negotiations with brands. The parent said brands might pay $10,000 to $15,000 for a promotional Instagram post while a sponsored YouTube video might earn $45,000. A 30- to 90-second shout-out in a longer video can cost advertisers between $15,000 and $25,000.

Samia waiting to shoot the next scene.CreditAudra Melton for The New York Times

The rise of this kind of advertising has raised questions involving fair compensation, oversight and work permits, especially since child labor guidelines vary by state.

Andrea Faville, a YouTube spokeswoman, said that the site didn’t allow anyone under 13 to make or own accounts and that it worked “closely with experts, nonprofit organizations and others in our industry to protect families using our services.”

YouTube came under fire last month after lewd comments by pedophiles were discovered on innocent videos of children; the company has since said it will suspend comments on most videos of minors. Some channels that can “demonstrate a low risk of predatory behavior” will keep comments but require moderators, the company said. It remains to be seen if disabling comments will hurt the kind of connections kidfluencers try to establish with their fans.

Sravanthi Dev, a spokeswoman for Instagram, said that while the platform prohibited users 12 and under, their parents or representatives could create profiles for them “as long as it is clear in the bio information that the account is run by the parent or representative.”

Michelle Foley’s 6-year-old daughter, Ava, and her best friend, Everleigh, also 6, have more than a million followers on their shared Instagram and YouTube accounts. YouTube’s analytics say Ava and Everleigh’s viewers are largely between the ages of 25 and 44, Ms. Foley said, but she said she thought the core audience was between 8 and 18.

“When we go out, parents never know who we are, but kids do,” Ms. Foley said.

Alex Chavez-Munoz, a founder of Viral Talent, which works with child influencers, also disputed the data.

“When you see the analytics of a kidfluencer channel, the dominant audience is 25- to 34-year-old women,” Mr. Chavez-Munoz said. “That’s obviously not the case. The case is that the child is watching it on their parents’ device.”

In December, a 9-year-old kidfluencer known as Txunamy shared a photo on Instagram and asked her more than two million followers to comment on it and share their ages. Thousands of replies flooded in: 9, 10, 11 years old.

Captiv8, which connects brands with influencers, found more than 3,100 Instagram influencers, from a sample of 1.2 million accounts, who are likely under 13 based on terms in their bios like “managed by mom.” (Instagram has more than a billion users.) Each account had at least 1,000 followers.

On YouTube, the much bigger kid influencer destination, there are toy accounts like Ryan ToysReview, whose young star earned $22 million in a year, according to Forbes. But children, under their parents’ watch, are also building followings on YouTube and Instagram as gamers, video bloggers, fashionistas, mischievous toddlers and personalities who anchor family channels, which are often a cross between reality TV, pranks and random skits. YouTube accounts can also bring in serious ad dollars without brand deals, which are shared with the site.

Everleigh’s grandmother, whom Ms. Foley met when they worked together, came up with the idea of making an Instagram account for the girls when they were 10 months old, calling them “besties” and dressing them in matching outfits. The girls went “viral” eight months later after the account helped them land a modeling campaign for the Kardashian Kids line, Ms. Foley said.

At that point, “we were like, ‘We should start a YouTube,’ but they couldn’t talk,” she said. “So then we kind of waited for them to start talking.”

The girls also have their own separate Instagram accounts. Everleigh’s sponsored posts have included promotions for toys (“I’m excited to share that the new PAW Patrol Mighty Pups line is available exclusively at Walmart!”) and Disney dolls (“Everleigh is in LOVE with her Fancy Nancy dolls!”).

The girls have made celebrities out of the rest of their families. Ava’s 1-year-old brother has 148,000 Instagram followers, and Everleigh’s newborn sister has a million. Recently, Everleigh started a YouTube channel, Everleigh Opens Toys, and Ava is interested in making one, too, Ms. Foley said.

“If it wasn’t for Everleigh and Ava, I would not have what I have today,” she said.

Brands want to team up with children for the same reasons they want to work with older social media personalities — their follower counts, the ability to post more quickly than traditional ad agencies, the way the posts feel like recommendations from a friend. But advocates say these techniques can deceive children, who are in the early stages of understanding and recognizing advertisements.

Children’s television, overseen by the Federal Communications Commission, has rules that separate ads from content and limit product placement and promotions by a program’s host or characters. The internet doesn’t.

Rules that require children’s television shows to separate ads from content and limit product placement and promotions do not apply to the internet. CreditAudra Melton for The New York Times

YouTube has its own guidelines for children’s advertising, but they are often hard to police. For example, the YouTube Kids app, designed for children 12 and under, is not supposed to contain sponsored content, but The New York Times found several paid advertorial videos from influencers there for companies like Walmart, Dreamworks and Claire’s. (YouTube removed the videos after The Times asked about them.)

“It is very manipulative of young children,” said Kathryn Montgomery, a professor emerita at American University’s School of Communications. “With this form of promotion and advertising, there is a purposeful blurring of those lines.”

Ava and Everleigh’s YouTube channel peppers sponsored videos among dance battles and hangouts with other influencers. Ms. Foley said the family could get 10 email requests a day from brands.

The girls posted a 10-minute sponsored video for Mattel in November titled “First Sleepover Opening Giant Presents!” An adult asked the children, clad in matching pajamas, about their holiday wish list, which was “Barbie everything!” They appeared to sleep, then woke up, squealing, to wrapped Barbie merchandise.

Mattel declined to comment on its child influencer strategy.

In an advertorial video for Staples, Txunamy declared her excitement about back-to-school shopping at the chain, then showcased her “haul.”

“Whenever we work with younger influencers, all contracts and negotiations are conducted through their parents or talent agencies directly representing them,” said Meghan McCarrick, a spokeswoman for Staples.

Social media stars aren’t typically considered actors under the law. In California, a portion of child actors’ earnings are set aside in a trust based on the decades-old Coogan Law, named for a former child star whose parents spent all his money by the time he turned 21. Similar trusts are required by New York, Louisiana and New Mexico. For kidfluencers, it’s usually a voluntary decision by parents to create these accounts.

Several families said they had established the accounts after working on traditional TV shows or national commercials.

As for the children, it can be tough for them to understand how much of a fuss they’re creating.

Samia’s father, Mr. Ali, said, “She doesn’t have a concept of viral or ‘views,’ so it’s almost like, for her, walking into an experiment to learn something — it’s more of us giving her a task or assignment, where she has something to conquer.”

He added, “We’ll know when she gets a sense of her following and let her know what this all means.”

FacebookshareGoogle+sharePinterestpin it
Medical News Today: Pollutants may speed up ALS progressionThe Jordyn Woods Drama Dominated the Social Conversation This Week. But What Do We Know?
Latest