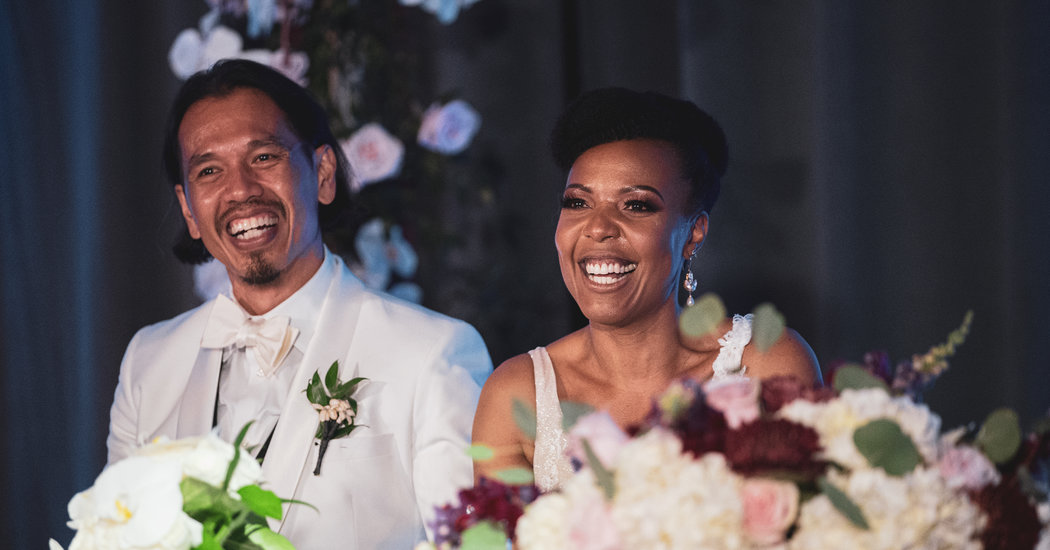 Nearly four years ago, Stefanie Joshua could easily have become a bride.

“Fortunately for me, it didn’t happen,” she said.

Ms. Joshua, then 40, had been proposed marriage to several times during a two-and-a-half-year relationship “that was flawed from Day 1,” as she put it. “I was one ‘yes’ away from walking down the aisle,” she said, recalling the relationship she chose to walk away from in August 2015. “But I knew in my heart that he wasn’t right for me.”

Ms. Joshua, now 44 and an associate director of residence life at the School of Visual Arts in Manhattan, said that when she entered her 40s, she began to think that time was running out for finding true love and settling down.

“But I wasn’t going to compromise my situation just for the sake of getting married,” she said. “So I finally ended it.”

She shifted into recovery mode for a few months before deciding, with much skepticism, to give online dating a try. “I didn’t want to become a Match.com ad,” she said.

She submitted her profile to that same app, and it soon revealed that she and a man named Jaime Cordova, who was living in Bloomfield, N.J., were a 95 percent match.

“Looking at his profile, he seemed like a pretty interesting guy,” she said. “I was kind of curious.”

Mr. Cordova, then 46, worked in Newark as a senior network engineer at Broadridge Financial Solutions, a financial services company based in Lake Success, N.Y.

Like Ms. Joshua, he had never been married, and had re-entered the dating scene after making a breakup decision dictated not by calendar but by his own conscience.

“I had gone out with a woman for two years before we both realized that we just weren’t compatible enough to be married,” Mr. Cordova said. “It was a mutual parting of the ways, but it wasn’t easy, and I needed time to clear my head before jumping back into the dating game.”

Ms. Joshua and Mr. Cordova began communicating via Facebook in June 2016. They exchanged texts, “and quite a bit of good banter,” Mr. Cordova said, before arranging a first date that same month at a pizza shop on the West Side of Manhattan.

“I realized how beautiful and well-spoken she was in person,” said Mr. Cordova, who had just come from a Bernie Sanders rally in Washington Square Park.

“She also had this gentle way about her that seemed to put everything at ease,” he said. “Everything about her just made for a very comfortable conversation.”

Ms. Joshua learned that Mr. Cordova was born in the Philippines and was 5 when his family arrived in the United States and settled in West Orange, N.J. He graduated from Kean University with a degree in computer science, and served in the Marine Corps Reserves from 1990 to 1999, achieving the rank of staff sergeant

A veteran of both Operation Desert Shield and Desert Storm, Mr. Cordova said he wished he had an opportunity to meet Ms. Joshua’s father, Joe Lewis, who died in June 2016. He had retired as both an Army and an Air Force sergeant and later owned several laundromats, including one in the Bushwick section of Brooklyn, where Ms. Joshua was born and raised.

Mr. Cordova also learned that Ms. Joshua graduated from Stony Brook University and received two master’s degrees, one in sociology and research from City College, the other in kinesiology from Brooklyn College.

“I felt an instant connection with Jaime,” Ms. Joshua said. “I could tell that he was the kind of guy I could speak with about anything without fear of judgment, which was something that was new and refreshing to me.”

They began dating steadily shortly thereafter, and found many more things in common, including a love of working out, traveling and spending time with family.

“Jaime has a lot to brag about — he’s intelligent, stylish, very handsome and has an extremely hot body,” Ms. Joshua said, laughing. “Yet he was always so quiet and unassuming, which I really admired about him.”

In May 2018, Mr. Cordova moved into Ms. Joshua’s Gramercy Park apartment in Manhattan, where she has lived for 20 years.

“They are a perfect match and I’m thrilled that love has finally found them,” said Jacqueline Joshua, Ms. Joshua’s sister. “Stefanie is a very strong, regimented woman who has a script for everything. She’s a real perfectionist, while Jaime is someone who tends to deviate from the script. But they both bring humor to every situation.”

Mr. Cordova’s father, Jaime G. Cordova, was a quality insurance inspector at Pfizer in Parsippany, N.J., before he died in January 2011 — his mother, Abcedemata Arrogante, said she wished her husband was still around to meet Ms. Joshua.

“He would have loved Stefanie the way the rest of my family loves her,” said Ms. Arrogante, a retired nurse from Bayonne Medical Center in Bayonne, N.J. “She’s a beautiful girl, and much like my son, she’s considerate, generous and loving.”

Paula Jensen, a Universal Life minister, led a ceremony filled with cultural traditions, including a rose ceremony in which the couple handed two red roses each to the mothers.

“Their decision to be married was not arrived at carelessly,” Ms. Jensen said. “The human need to have a partner is more than a rational conclusion and it is not merely a case of natural selection. Of all the millions of people on this planet Jaime and Stefanie were drawn to each other.”

A traditional Filipino veil ceremony followed, as a veil was draped over the couple’s right shoulders. This is a symbol of their being connected, and a reminder to them that they belong to each other, and that their love serves as a place of refuge and warmth for another.

Then the couple exchanged vows.

“At some point, I resolved that finding love, a life partner, may be something that might not happen for me or may be an area where I would need to compromise on my personal values — and then I met you,” the bride said to the groom.

“You put up with all of my perfections,” she said jokingly, before pausing a moment to collect herself.

The couple then participated in jumping the broom, which signifies a sweeping away of the old and jumping into the new. The act also honors enslaved people in the South during the 1840s and 1850s who were not permitted to legally marry; some had performed the ceremony to signify their union.

Ms. Joshua and Mr. Cordova were then pronounced husband and wife, and walked back down the aisle, hand in hand, to a thunderous applause that gave way to a violin quartet’s stirring rendition of Mendelssohn’s “Wedding March.”

At the reception that followed on the premises, the bride’s mother, Diane Joshua, walked around with a sparkling drink in her hand and a radiant smile on her face.

“We are here today because Stefanie understood that marriage does not validate you as a person,” she said. “She continued to wait for Mr. Right, and he finally came along.”

It Finally Happened Alphonso Gill, the bride’s 27-year-old nephew, was thrilled to see his aunt “finally,” walk down the aisle. “I wasn’t sure it was ever going to happen,” he said, laughing. “When I heard the news I called my aunt and was like, ‘O.K., this is it now, right? You’re good? You sure?’”

FacebookshareGoogle+sharePinterestpin it
Humans Shipped an Awful Cargo Across the Seas: CancerWarren Has Her Plan. Buttigieg Suggests Another Way to Cut Health Prices.
Latest