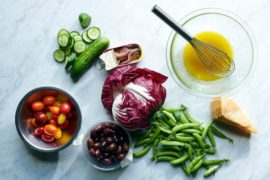 I once asked a famous chef what his favorite food was, expecting an answer along the lines of caviar or foie gras or sea snail broth sipped from a shell.

The wisdom of his words was profound. Because no matter the incarnation — whether mozzarella sticks, cheese curds or those thin wafers of grated Parmesan or Asiago called frico — there are few things more deliciously craveable than a bite of molten fried cheese.

This recipe celebrates the lighter side of fried cheese, starring here as a golden crust for eggs. Crunchy and brittle, a fricolike halo envelops the fried eggs, giving them a potato chip appeal with a salty, funky depth. Take one bite and you may never fry up plain eggs again, not when the cheesy version is so easy to make. 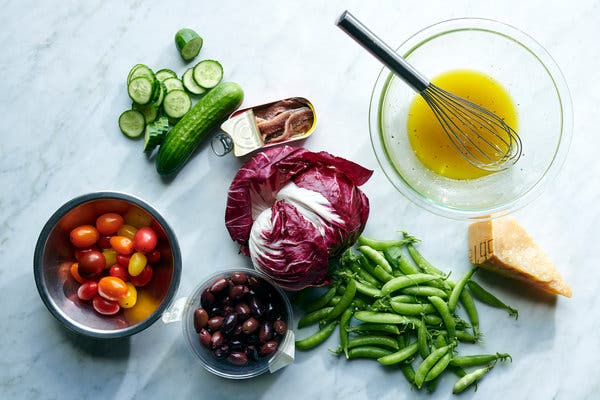 A simple lemon vinaigrette dresses  the salad, which gets its crunch from the peas and cucumber and brine from olives and optional anchovies.CreditDavid Malosh for The New York Times. Food Stylist: Simon Andrews.

You’ll need a nonstick skillet or well-seasoned cast-iron pan. Heat it thoroughly before brushing on a thin layer of oil, so you can be sure the Parmesan won’t stick. But don’t add too much oil or the eggs will be greasy. Properly fried cheese is all about balance.

Another thing to note: It’s important to sprinkle coarse strands of Parmesan into the pan, preferably cheese that you’ve shredded using the largest holes of your grater (it’s less than a cup, so grating moves quickly). The preground stuff is too powdery and won’t give you the same lacy perimeter. If you don’t have a wedge of Parmesan, other hard cheeses will work; try Asiago, Grana Padano or crumbly aged Cheddar.

Shredded Parmesan is first placed on the pan, then topped with eggs.CreditDavid Malosh for The New York Times. Food Stylist: Simon Andrews.

After frying, the gorgeous, brown-edged eggs are heaped onto a lemony salad filled with crisp vegetables — radicchio, sugar snap peas and cucumber — to accentuate the crunch. I call for blanching the peas, which makes them a little more tender and encourages them to soak up the dressing. But if you’re looking to skip a step, skip this one; just slice the raw sugar snaps a little more thinly so they’re easy to chew.

Then, if you love anchovies, drape them over the salad before serving. They add a saline verve that counters all the richness from the runny egg yolks. (Capers or sliced olives add a similar tang if anchovies aren’t your thing.) Or leave them off altogether. The Parmesan fried eggs will easily shine all by themselves. 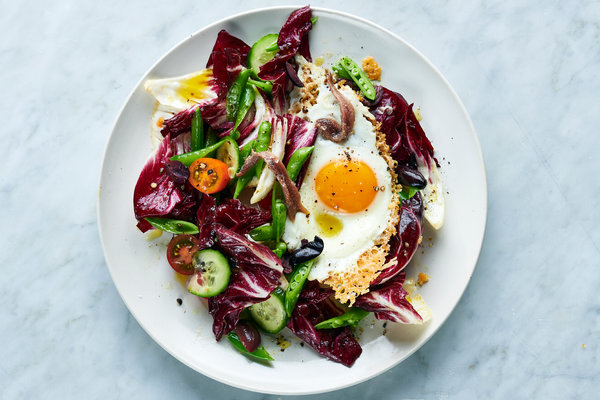 A Morning Meal Begs to Stay Up Late