What to Wear to Womansplain 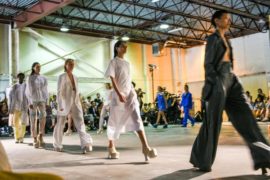 Almost two years since the news broke of Harvey Weinstein’s abusive and predatory behavior, starting the #MeToo movement and altering the power structure in numerous industries; just as a raft of books are published and planned on the topic; in a year in which there are more women running for president than ever; in a season of collections meant to be sold in 2020, a century after American women got the vote, female empowerment has been oddly low on the fashion agenda. Or at least the question of what it looks like today, which should theoretically be one of the questions when it comes to clothing.

Instead, there’s been a lot of talk of cheer and how fashion can be a bright spot in grim times; talk of sustainability; talk of wrestling with uncomfortable questions; the usual mining of the past.

All of this is useful and much of it is relevant, and yet it has produced kind of wimpy clothes: the tequila-sunset-in-Santa-Domingo moiré, raffia, and chiffon fanciness of Oscar de la Renta; a host of early 1980s career girl (and boy) leathers accessorized with a jaunty silk scarf at the neck and cut by some wink-wink Richard Bernstein pop culture references (Barbra Streisand, Rob Lowe) worn not on the sleeve but the shirts at Coach 1941. The suddenly mainstream femininity of little ruffled dresses, sequined slips and wide trousers of the formerly oddball Eckhaus Latta.

Also one excruciating misstep: Vera Wang, returning to the runway after two years with a moody mishmash of lingerie layers (dangling garter belts, sheer corsets, camisoles, frilled tap pants), men’s wear herringbones and wool and misty bordello romance, threw in shoes so acutely angled and vertiginous that her models’ knees shook with the effort to remain upright. Two actually fell, and one limped down the runway with one shoe off and one on, one leg about six inches shorter than the other.

In 2019, no woman should be tortured by what she wears.

At least the quiet environmental chic of Gabriela Hearst, marrying geodes and linen embroidered with insects gone extinct; blanket-stitching and urban trenches (the coat kind); dresses made from multiple rolled strips of recycled print fabrics pieced together into cha-cha fringe, was crafty, in both senses of the word.

But while Ms. Hearst name-checked strong women as inspiration backstage, and had Athena, Kurdish freedom fighters and Josephine Baker (in her war days) on her mood board, the effect was one of gentle suggestion; nudge-nudge. You had to really get up close to get the point.

Given how much our days are dominated by white noise and Twitter angst, that is either going to lure people in or risk being missed entirely. This is not a time for subtlety.

So it was something of a relief when Jack McCollough and Lazaro Hernandez of Proenza Schouler finally put strength back on the table.

They had power shoulders! Power hips! Power accessories! Power irony! Yeah — they were revisiting the decade of the power suit. But at least they were doing it with energy and glee.

Jackets were oversize on top; pants high-waisted and pleated; dresses draped and cowled at the chest to create exaggerated curves. Things were jutting out all over and taking up space. There was some heavy metal in belts and big brassy buttons, and some on-purpose frumpiness (just, you know: take that, male gaze!). There was a glimpse of skin in the deep-dipped sides of easy-access bronze-beaded halter dresses. Lesley Gore was singing on the soundtrack.

They were clothes for womansplaining. It was a blast.