What to Cook: The Most Popular Recipes of 2018 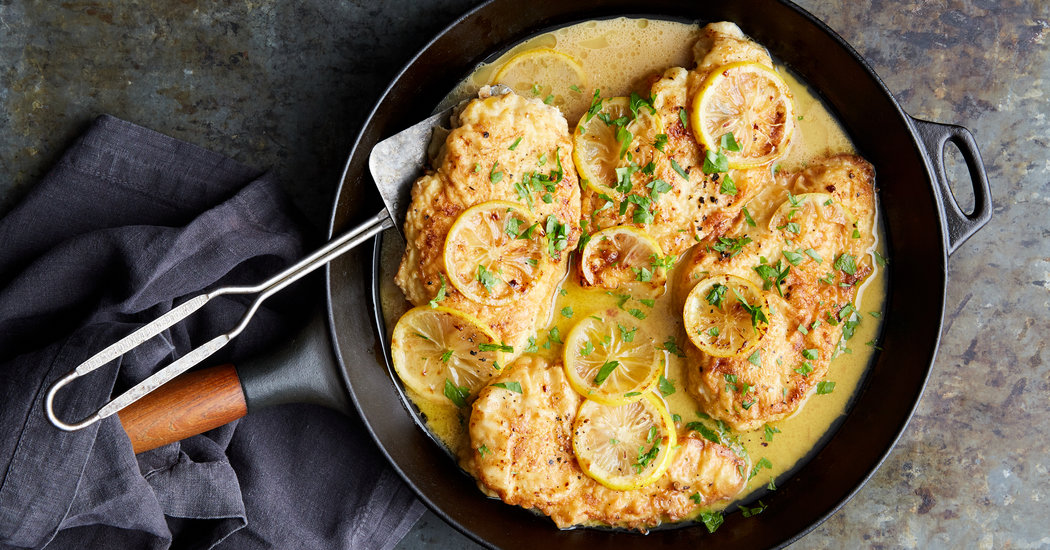 Good morning. We mined our data to come up with a list of the 50 most popular new recipes on NYT Cooking this year. I’m super-stoked to report that the top slot went to Julia Moskin’s recipe for chicken francese (above), an American-Italian interpretation of French cooking that you’ll find on restaurant menus all over the United States but particularly in ones built under the low slate skies of Rochester, N.Y., where the dish is known as “chicken French.”

A number-one position for the children of East Avenue, Upper Falls and Swillburg! A Kodak moment for Fairport and Greece, Brighton, Pittsford, Irondequoit! Chicken francese is a fantastic dish, easily made, with deep and abiding flavor that goes nicely alongside plain spaghetti tossed with olive oil and butter, a side of garlicky greens, some bread. Try it. Chicken French for all.

Other top recipes this year included: Alison Roman’s salted chocolate chunk shortbread cookies; Melissa Clark’s sheet-pan chicken with sweet potatoes and peppers; the beef and broccoli I learned to make from the private chef Jonathan Wu and the restaurateur and chef Dale Talde; and Alison’s classic baked macaroni and cheese. Check out the complete list, and get cooking. Collect them all!

You don’t have to cook a recipe tonight, of course. On Wednesdays I encourage you not to use recipes at all, but to engage in an exercise of improvisatory cooking, working off a narrative theme.

For instance, bananas Foster. You can look at the recipe a predecessor of mine, Jane Nickerson, brought to The Times in 1957. Or you can riff off the experience I had on Saturday night at Commander’s Palace in New Orleans, where a top-tier captain named Samantha La Pointe-Woolf made the dish tableside, and made it the best I’ve ever had.

All you need is a lot of butter, a lot of brown sugar, a couple of bananas, light rum, some banana liqueur if you have any (if you don’t, the rum’s just fine). Everything is ratio: Think about a half stick of unsalted butter for every two bananas, and about as much brown sugar. Melt and swirl the butter and sugar over medium-high heat to create a thick caramel, then add the bananas, peeled and halved, to get a little color on them. Sprinkle with cinnamon, add a half cup of rum and a splash of banana liqueur, then tip the pan slightly so the alcohol goes alight. WHOOSH GOES THE FLAME. Continue swirling until everything dies away, then spoon the caramel over the fruit again and serve with vanilla ice cream.

You can find actual, tested, written and photographed recipes to cook right now on NYT Cooking. Like, for instance, this awesome salty-sour recipe for pork shoulder asado that Priya Krishna learned from Chad and Chase Valencia, brothers who own and run the Filipino restaurant Lasa in Los Angeles.

Of course, you’ll need a subscription to access them. It will support everything we do. (If you want to redouble that sustenance, consider buying a gift subscription for someone else.)

We’ll be standing by to help, should anything go wrong along the way, either with your cooking or our technology. Just ask for help: cookingcare@nytimes.com. We will get back to you.

Now, nothing whatsoever to do with persimmons or Moscow mules, but Baratunde Thurston recently introduced me to Detour, a kind of cool-kid tourism app that leads you on tours around cities across the United States and the world. (It’d be neat, we agreed, to write a fictional one for New York, a satirical guide to the East Village, say.) Bose bought the app a number of months ago to use as an experience for their forthcoming augmented reality platform, so act now.

Here are The Buzzcocks, “Ever Fallen in Love,” an early-days video performance I hadn’t seen before and it’s terrific. (Pete Shelley, the band’s leader, died last week at 63.)

Finally, I like this photo-audio feature in The California Sunday Magazine, a roundup of some Californians’ go-to meals. Check that out, and make bananas Foster for dessert tonight. I’ll be back on Friday.

FacebookshareGoogle+sharePinterestpin it
Critic’s Notebook: Rib-Eye Steak With a Side of ShakespeareQ & A: The Travels of Tony Shalhoub, From Paris to Austin
Latest