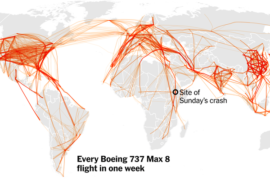 The Ethiopian Airlines plane crash that killed 157 people on Sunday has rattled travelers around the world. Just six months ago, the same model of airplane — a Boeing 737 Max 8, operated by Lion Air — crashed off Indonesia and killed all 189 onboard.

While the cause of Sunday’s tragedy remains undetermined, and the investigation into the Lion Air accident is ongoing, several circumstances of these two crashes are similar.

The 200-seat Boeing 737 Max 8 has been a popular plane since it came on the market in 2017, with more than 4,000 planes ordered within the first six months. The plane sold quickly based on features that passengers crave — a quieter cabin, more legroom — and bottom-line benefits to airlines, like fuel efficiencies. The plane’s entry into the market seemed like the rare win-win for both passengers and airlines. At the time of the Ethiopian Airlines crash, nearly 350 Boeing 737 Max 8s were in operation around the world, including in the United States, on routes across the country: Miami to Los Angeles, Houston to Denver, San Francisco to Portland.

In the wake of the Ethiopian crash, more than a dozen airlines around the world said they would ground their 737 Max 8 planes. But at least 12 other carriers, including American Airlines and Southwest Airlines continued to fly them on Monday.

Alicia Winnett and her husband had planned to fly Air Canada from Vancouver to Calgary on Friday, and she contacted the airline, via Twitter, after hearing about Sunday’s plane crash.

The airline confirmed that her flight is scheduled to be on the Boeing 737 Max 8, she said adding that the airline told her that the Max 8s “have a great safety, reliability and customer satisfaction rating.”

“How could they say that a Boeing 737 Max 8 has a great safety record when two brand-new planes have tragically crashed within five months of each other in a seemingly similar manner,” Ms. Winnett wrote in an email.

Ms. Winnett said she is hoping to switch to a later flight on an Airbus 320, although she said Air Canada had told her that was not possible. “I just cannot sit on a Boeing 737 Max 8 with confidence,” she said.

To help travelers understand how to determine what plane they are scheduled to fly on, and their rights if they decide they do not want to board a Boeing 737 Max 8, we talked to airlines, passenger advocates and airline experts:

With 34 planes in operation, Southwest Airlines is the airline with the largest number of Boeing 737 Max 8s in the world. Air Canada and American Airlines each have 24. United Airlines does not operate any Boeing 737 Max 8 aircraft, but it does fly the 737 Max 9. Delta Air Lines does not fly any 737 Max planes.

The Federal Aviation Administration tweeted on Sunday that it was “closely monitoring” developments in the Ethiopian Airlines crash, and on Monday, stressed its assurance that the 737 Max suite of planes were airworthy.

“If we identify an issue that affects safety, the F.A.A. will take immediate and appropriate action,” the agency statement said.

Which Airlines Fly the Boeing 737 Max 8
The jets typically make more than 8,500 flights per week worldwide. 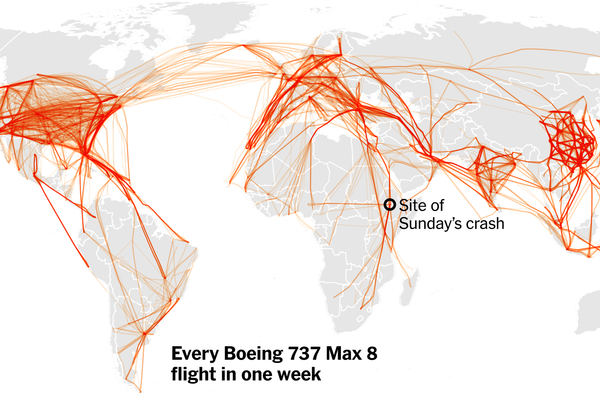 For most travelers, the information about their plane type is available at the time of booking, either during the seat-selection process or elsewhere online.

Experienced travelers — and especially those who frequently book longer flights — often head to FlightStats.com or SeatGuru.com, to determine their planes.

Even if passengers determine which type of plane they are booked on, airlines might change planes at the last minute, as required by logistics or a change of weather.

If I want to cancel a flight scheduled on this plane, what are my rights? Could I get a refund or a free flight elsewhere?

Henrik Zillmer, the chief executive of AirHelp, a company that helps travelers make claims against airlines, thinks passengers are probably out of luck.

“Travelers can cancel their flights, but would not be eligible to claim compensation if they decide to do so,” he said. “They do not have a right to compensation or reimbursement for tickets purchased as it is technically their decision to cancel.”

If, however, you are booked on a flight with an airline that has grounded its Boeing 737 Max 8 planes, Mr. Zillmer believes you will probably be refunded your fare.

“Since this situation would be a result of mechanical issues and therefore the airline’s own fault, travelers may be eligible to claim compensation,” he said.

Critically, though, what compensation is due and the laws that protect passengers depend on the departure airport and the home country of the airline.

If you are on a flight in or out of the European Union, or operated by a European Union-based airline, Mr. Zillmer notes that E.U. regulations may entitle you to compensation of up to “$700 per person.”

But depending on where you are, there may not be a different plane operating on the same route, limiting your options.

What about flight insurance?

Paul Hudson, the president of Flyers Rights, a passenger advocacy group, says even insurance might not help in these circumstances.

“Insurance would probably protect against government or airline action grounding delays, but not passenger election to change flights,” he said.

Julie Loffredi, the manager of media relations for InsureMyTrip.com, a travel insurance comparison site, said that “fear” is usually not a good enough reason for insurers to pay compensation to travelers who cancel their flights.

“With traditional, standard travel insurance you wouldn’t be able to cancel and get your money back out of fear,” she said.

However, since the 9/11 terrorist attacks, more fliers have purchased coverage that allows for any cancellation, whatever the reason.

What about change fees?

Because the F.A.A. has not grounded the planes, carriers are following their normal policies for passengers who wish to change their travel plans. American Airlines charges a change fee, as does Air Canada. Southwest Airlines does not charge change fees. Passengers may, however, need to pay any difference in fare price.

Which airlines have grounded their Boeing 737 Max 8 planes?

How are airlines responding?

Southwest Airlines representative Brian Parrish said via email that the airline has been in contact with Boeing and is following the investigation. “We remain confident in the safety and airworthiness of our entire fleet of more than 750 Boeing 737 aircraft,” he added. “We don’t have any changes planned to 737 Max operations.”

Air Canada is monitoring the situation and has continued to operate its normal schedule, said spokesman Peter Fitzpatrick in an emailed statement.

“We have extensive analytical data supporting the safety of these aircraft, which have also performed excellently from reliability and customer satisfaction perspectives,” he wrote.

American Airlines had not responded to a request for comment.

The Victims of the Ethiopia Plane Crash

After a Lion Air 737 Max Crashed in October, Questions About the Plane Arose