What I Love: A Cliché Harlan Coben Couldn’t Resist 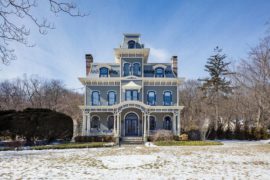 The house did not immediately grab Harlan Coben by the lapels.

It was, to tick off the liabilities, situated on one of the main drags in Ridgewood, N.J. Locally, it was a well-known pile of Second Empire gingerbread, with pink trim and a mansard roof. People would drive by and gawk. Sometimes, they would park down the street and, affecting a casual air, take a nice, slow walk past the property for a closer look. And with three floors and nine bedrooms, it was a lot of house.

Perhaps most problematic, it was a touch too on-the-nose for the best-selling author of a few dozen thrillers to live in a spooky Victorian manse. “It’s the kind of cliché I try to avoid when I write,” said Mr. Coben, whose latest work, “Run Away,” the story of a Manhattan money manager’s desperate attempts to save his renegade drug-addict daughter, is out this week.

This not being a mystery by the master himself, there is no imperative to keep readers in suspense.

Just over 20 years ago, Mr. Coben and his wife, Anne Armstrong-Coben, a pediatrician, were living across town in a center-hall colonial, expecting their third child (they now have four) and looking for more space. “When the house came on the market, it seemed like a good value,” he said, and so the deal was done.

“My wife and I were in agreement,” Mr. Coben continued. “It wasn’t like one of those home shows where they have a couple, and she wants something totally modern and he wants something old-fashioned. I watch and always wonder, ‘How did you guys get married?’”

But this acquisition might have satisfied even such bickering pairs. The previous owner had preserved and protected its abundant Old World charm — paneled walls and ceilings, wainscoting, crown molding, herringbone floors, beveled leaded-glass doors — while showing an appreciation for modern conveniences of the Sub-Zero kind. 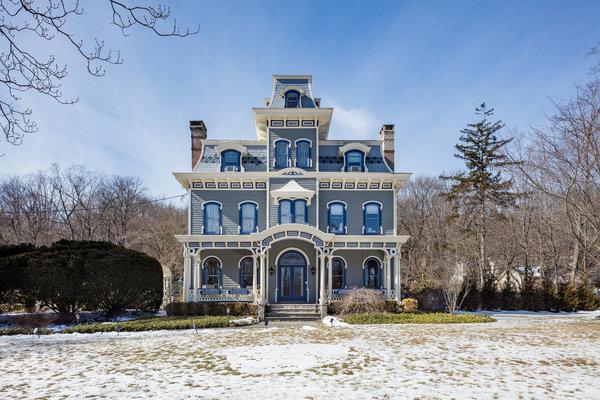 The three-story Victorian house in Ridgewood, N.J., is about 20 miles north of Mr. Coben’s hometown of Newark.CreditBrad Dickson for The New York Times

“The Victorian had all the structure of a great old house, but it really was homey,” Mr. Coben said. “I couldn’t turn it down. I sort of fell in love.”

The love burns as brightly as ever, but now it has a bittersweet tinge. One by one, the children have gone out into the world. With the youngest off to college next fall, Mr. Coben and his wife will be empty nesters in a very big nest.

“But the kids like coming back to the house,” he said, smiling gamely. “They all have their favorite nooks and crannies.”

Of course, Mr. Coben has his favorite spots, too. The library ranks high both because it provides an ideal background for the author photos on his book jackets and because, plain and simple, it’s a library. It has reading matter and lots of it, as well as treasures like a Maltese falcon statue, a tip of the hat to Dashiell Hammett, one of Mr. Coben’s literary idols. (“It’s kind of a cliché, but it’s here.”)

There is also a statue of Boston Celtics legend John Havlicek. “I loved him when I was a kid,” said Mr. Coben, a native of Newark, N.J., who played on the basketball team at Amherst College.

Some of the volumes in the handsome built-in bookcases are foreign editions of the Coben oeuvre. Such display is not born of a desire to trumpet the popularity of exhortatory titles like “Hold Tight,” “Play Dead” and “Tell No One” in distant ports. It is all about storage.

Storage is something of a theme for Mr. Coben, who has accumulated many items related to his work — both priceless and worthless — and has not the slightest idea what to do with them. Thus, plaques, posters of the film adaptations of his novels, photographs (some sent by fans) and blowup images of the New York Times best-seller list with this or that Coben novel in the top spot lean against one another in the library, just steps from the pool table.

For the record, no one in the family picks up a cue stick. Ever. The presence of the table is a puzzle best left to keener minds. Except when reporters are around and there is an attempt to tidy up, the stretch of green felt holds detritus and, when Mr. Coben is sitting in a chair nearby, his feet.

He and his wife have made a few alterations to the house over the years. They painted that pink exterior trim blue, added a bathroom, converted a broken-down greenhouse into a sunroom, outfitted the backyard with a pool and a sports court, and in the spirit of D.I.Y., installed a faux-tin ceiling in the kitchen using plastic molding and gray spray paint.

Mr. Coben has an officially designated office on the second floor. It was once the bedroom of his younger daughter, Eve, which explains the red-and-purple walls. Providing a sober contrast is the partners desk that Mr. Coben and his wife bought to celebrate their first wedding anniversary.

Actually, the office is kind of superfluous. Unlike authors who require a setting with a specific barometric pressure to write even a check, Mr. Coben can work anywhere: a coffee shop, the back of an Uber (seriously). Plot turns have presented themselves during his time on the treadmill desk in the third-floor workout room and in the sunroom, which is just off the kitchen.

“I don’t need or want one particular spot,” said Mr. Coben, who signed a deal last year with Netflix to turn several of his thrillers into series and movies.

He left the job of furnishing the house to his wife when they moved in two decades ago. And sometimes he may feel a twinge of regret about that decision, particularly about some of the contributions from his mother-in-law, an antiques lover who is now deceased.

“Once in a while I see something that’s really ugly, and I don’t know why we’re keeping it, and a lot of it was from her,” Mr. Coben said, hastily adding, “But I do like the player piano that came from her.”

It was his mother-in-law who bought him the menagerie of animal-head walking sticks in the stand by the front door. “She thought I should have a collection of something, but I haven’t collected any beyond the ones she got me,” Mr. Coben said, unscrewing one of the sticks to reveal a flask, another to show the dagger tucked inside.

Just a weapon looking for a plot.

FacebookshareGoogle+sharePinterestpin it
Professional Hair Removal Catches On With the Preteen SetWell : Broken-Heart Syndrome Is Not All in the Head
Latest