Was It the Hummus or the Familiarity? 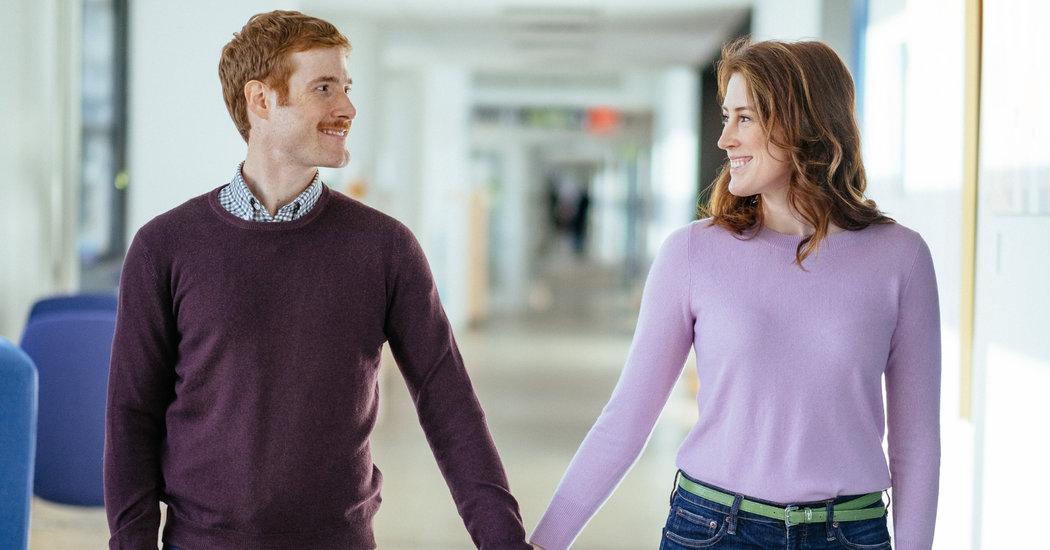 Erica Lynn Kilbride and Eric Ronald Obenzinger were married Oct. 12 at the Prospect Park Boathouse in Brooklyn. Gabriel Hernandez, a friend of the couple who became a Universal Life minister for the occasion, officiated.

The bride, 32, is a data science solution principal at Slalom Consulting, a technical and business management consultant in Manhattan. She graduated from the University of Texas at Austin, and received an M.B.A. from the University of Houston. She also holds a master’s degree in applied statistics from Columbia.

She is the daughter of Laurie B. Kilbride and Patrick M. Kilbride of Houston. The bride’s father was a manager of global offshore installations in Houston for ExxonMobil, for which the bride’s mother retired as a regulatory admitting supervisor.

The groom, 34, is a global client lead in Manhattan for Google. He graduated from the University of Pennsylvania and is an active member of the alumni community at Friends Seminary in Greenwich Village.

He is the son of Stefanie Steel of Manhattan and Mark M. Obenzinger of Santa Fe, N.M. The groom’s mother, who works in Manhattan, is a director of development at the Visiting Nurse Service of New York. His father, who worked in Manhattan, retired as a senior securities analyst for institutional investors.

The couple met through the dating app Bumble in May 2017.

Through their profiles they came to realize that they had much in common. Beside the fact that her name was Erica and his was Eric, each had red hair, was 6 feet tall and Jewish.

“I told my friends I was going on a date with the male version of myself,” Ms. Kilbride said.

Mr. Obenzinger, a native New Yorker, was living in Manhattan at the time while Ms. Kilbride, who grew up in Houston, was living in Park Slope, Brooklyn, where they met on a first date at Blueprint, a bar near her apartment.

They ordered a hummus dish, and before it arrived, Ms. Kilbride noticed that Mr. Obenzinger mentioned his grandmother several times during their initial conversation.

“That told me how much he loved her, and how much his family meant to him,” she said. “Family means everything to me as well. I consider my father to be my best friend.”

Then the hummus arrived.

“Just before we start to eat, Eric pulls a Lactaid out of his pocket, Ms. Kilbride said, laughing. “At first I was like, ‘What’s going on here,’ but then I realized how comfortable he was to do something like that in front of me, and I felt equally comfortable and said to him, ‘Hey, I have ulcerative colitis.’”

Mr. Obenzinger, who said he found Ms. Kilbride to be “beautiful and very intelligent,” left the date “determined to play it cool, and not text her too soon. “But by the time my Q train was going over the Manhattan Bridge from Brooklyn back to Manhattan, Erica had already texted me telling me she had a great time.”

They were dating steadily within a month, and it wasn’t long before Ms. Kilbride knew that she had found the man she was going to marry.

“He was very smart, extremely handsome and super considerate,” she said. “He’s someone who I can be completely myself with, someone who I felt secure enough with to share personal things that I wouldn’t have shared with anyone else, which is something I couldn’t do in previous relationships.»

As a homage to the Q train, which delivered each to the other on numerous occasions during their relationship, the couple had 45 of their closest friends and family members storm a Q train on Oct. 11, the day before their wedding, to witness their signing of a wedding Ketubah as the train went over the Manhattan Bridge.

The next stop was Park Slope, and everyone celebrated at the Blueprint, where the couple’s story began.

FacebookshareGoogle+sharePinterestpin it
Medical News Today: Can more vegetarian options tempt carnivores away from meat?Airline Food Waste Is a Problem. Can Banana Leaves Be Part of the Solution?
Latest