Vows: She Proposed That He Be Her Caddie. They’ve Worked to Avoid the Rough. 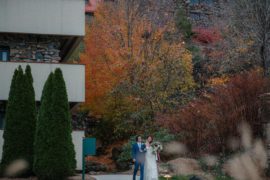 Jean Chua was athletic and adventurous growing up in Kuala Lumpur, Malaysia. Between the ages of 6 and 13, she excelled in swimming and table tennis, represented her school in softball and badminton, and became a member of the Malaysian national rhythmic gymnastics team.

At age 14, Ms. Chua switched to golf because her parents worried about the strict dietary restrictions imposed upon gymnasts.

“I was used to training hard for gymnastics so golf worked for me,” said Ms. Chua, who was 15 when she won the Hong Kong MacGregor Junior Open in 2003.

As a member of Malaysia’s national junior golf squad she became the Malaysian Ladies Golf Association’s No. 1 female amateur golfer, traveling to many countries for competition. In 2005, Ms. Chua received a full ride to Wake Forest University in Winston-Salem, N.C., where, in 2009, she was part of the Demon Deacons team that won the Atlantic Coast Conference championship, the team’s first in 14 years. 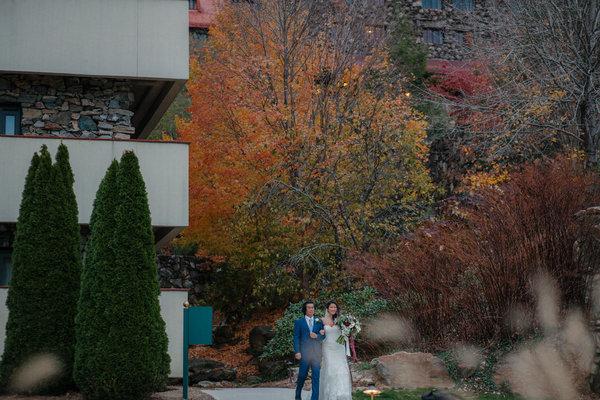 The bride with her father, Benny Chua, during the ceremony at the Omni Grove Park Inn in Asheville, N.C.CreditJacob Biba for The New York Times

She dated a soccer player but found romance difficult. “It was hard to have a relationship because athletes travel constantly, and there were issues with trust, exclusivity and different schedules,” she said.

In 2009, Ms. Chua, who is now 31, received a degree in mass communication, turned professional, spent eight months in Thailand training with the Australian coach Shane Wilding, and won the Thai L.P.G.A. Open. After returning to North Carolina, she met Wesley Griswold, a Winston-Salem State University student on a golf scholarship, who was asked by a mutual friend to help her move to Chapel Hill, N.C.

“I watched Wes pick up my bed and carry it out to the truck,” she said of that spring day in 2011. “I liked his build and thought he was hot. We didn’t talk long but he seemed confident, almost arrogant, yet carried himself well.”

Though Mr. Griswold was attracted to her, it was the wrong time. “I was newly single after a long romance and not looking to dive into a relationship,” he said.

A few weeks later when Ms. Chua was in Florida for golf tournaments she initiated a conversation with Mr. Griswold on Facebook that turned to texting. Shortly after, Mr. Griswold, now 30, was driving from North Carolina to Florida and asked if she would meet for dinner at a Chili’s in Orlando. She thought it was a date, but he merely wanted a dinner partner.

Jay Steffel, a friend who was ordained by American Marriage Ministries, led the ceremony before 72 guests. “Why get married in this tumultuous world?” asked Mr. Steffel, before assuring them that together they will become smarter and better prepared to tackle life’s challenges.CreditJacob Biba for The New York Times

“Not only did he not offer to pick up the check, but he ordered a huge slice of chocolate cake and ate it all himself while I watched,” she said. “I was upset and didn’t want to see him again.”

But when he asked her to go bowling a few weeks later she drove down rural roads to meet him in Frostproof, a small Florida town where he was raised and his parents have a lakefront home. When he introduced them to Ms. Chua, his father Mike Griswold, who liked her “charisma and energy,” and suspected his son did, too.

Bowling that night was fun if not romantic. “We shared a love for competition early on,” Mr. Griswold said. “Jean was different from other women I had dated because she seemed genuine, down to earth and not self-centered. She liked to help others.”

Two weeks later, Ms. Chua played 36 holes in North Carolina and qualified for the L.P.G.A. United States Women’s Open that July. After texting Mr. Griswold of her good fortune, he persuaded her to visit him in Panama City. Excited about qualifying and Mr. Griswold’s invitation, she drove all night and arrived at 7 a.m.

For the next few days, they hung out at the beach, interacted with his parents, and shared a kiss. She then asked him to caddie for her at the Open. He was “shocked” because that tournament is the most important in women’s golf and professionals use experienced caddies. “It would be my first time at a professional event, and the stage couldn’t be bigger,” he said.

Last year, after nearly 7 years, and traveling to 10 countries and 30 states together, Mr. Griswold finally felt settled, financially secure, and ready to propose.CreditJacob Biba for The New York Times

A week later, Ms. Chua reached another milestone when she finished second at an event that promoted her to full status on the Symetra Tour, the official development and qualifying tour of the L.P.G.A. She flew to Malaysia to sign a $60,000 sponsorship deal with Sime Darby, a trading conglomerate.

After returning to the United States, she joined Mr. Griswold at the Broadmoor in Colorado Springs for the Open, where they shared a room and strategized her game. “He was an amazing caddie,” she said. “I made the cut and was paired with the No. 1 and No. 3 players in the world.”

During the Open, Mr. Griswold took notes, carried the bag, cleaned her clubs, did the laundry, planned their meals and kept their room spotless. “I wanted her to rest and stay focused on golf,” he said. “Making the cut was a big deal. The entire week was an experience we will always cherish, especially since it was the beginning of our relationship.”

The next month, in August 2011, she was touring full time and they rented an apartment together in Winston-Salem, where Mr. Griswold had one more year of college. He caddied for her on weekends, and she helped him with math. He finished a degree in interdisciplinary studies.

The couple then moved to St. Petersburg, Fla., in 2012 and the following year he received an M.B.A. at the University of Tampa. All the while, they toured in the United States, Australia, New Zealand, India and Malaysia, always working to improve her game.

The bride and her father share a dance at the reception.CreditJacob Biba for The New York Times

“Wes swallowed his ego,” said Dianne Dailey, Ms. Chua’s coach at Wake Forest. “Most men don’t want to play second fiddle but he was the opposite. He didn’t talk about what he was doing only about what she was doing.”

Still, too much togetherness got tough. They argued constantly about anything from club selection to reading putts, and she fired him at least 10 times. “I am surprised we didn’t kill each other,” Ms. Chua said. “It was hard working so closely with someone you’re dating.”

The business arguments would continue off the course because they were always in the same car driving to the next tour location and eating meals together. They both recalled taking six- to 10-hour car rides in silence.

“Although her anger would upset me, if I think an argument is petty, I ignore it, which drives Jean crazy,” he said. “If its something more significant then we discuss and eventually resolve by communicating.”

Most of their conflicts were a result of Mr. Griswold pushing Ms. Chua to be a better golfer. (Her best years were 2012 with five top-10 finishes and 2013 with two on the Symetra Tour.) If she had a bad round and looked to him for consolation, he might give her one sentence then delve into everything she did wrong.

The couple are both venturing into the business world. Ms. Chua left the tour last year to pursue an M.B.A. Mr. Griswold is working for Jabil, an electronic manufacturing services company in St. Petersburg, Fla.CreditJacob Biba for The New York Times

In 2013, at the Symetra Classic in Charlotte, they fought about a particular shot. She scored 8 on a par-4 hole and followed it with a 6 on another par-4. She made the cut but was discouraged about her performance. “Wes was furious, so no consolation from him,” Ms. Chua said. “I sat in a field by myself and cried. I wanted someone to hold me and tell me it was going to be O.K. Wes wasn’t lovey-dovey boyfriend material, but being an athlete himself, he put my career first and made me a greater golfer when he was caddying for me, and I love him for that.”

“Wes is a wood-element dragon child meaning brave, strong and frank, while Jean is a fire-element rabbit child, diplomatic, considerate, generous and smart,” said her father Chua Beng Yap. “In the end, the male dragon is attracted to the tenderness and kindness of the female rabbit, and the female rabbit likes and appreciates the strong and brave male dragon.”

In 2014, when Mr. Griswold started his career as a business unit manager at Jabil, an electronic manufacturing services company based in St. Petersburg, Ms. Chua had to tour solo. “We argued more when we were apart, but texted frequently because we missed being together,” said Ms. Chua, who tried so hard to succeed that she began to deteriorate physically.

With elbow injuries and cubital tunnel syndrome that caused numbness in the hand and forearm pain needing surgery to correct, her game suffered. She didn’t want surgery and tried to work through the pain but realized it was time for a new career. In 2017, after discussions with Mr. Griswold who supported her decision, she left the tour and enrolled in the executive M.B.A. program at University of South Florida. She is now studying and working as an intern for Jabil’s chief of staff/strategy development manager in areas of automotive, smart home and appliances.

After nearly 7 years, and traveling to 10 countries and 30 states together, Mr. Griswold finally felt settled, financially secure, and ready to propose. “It was time,” he said. “We overcame every challenge, still laugh a lot, and remain compassionate about the same things, including golf, life goals, family and travel.”

Guests cooking s’mores during the reception. Glen Mabe, the groom’s best man, said, “Through good and bad times, they have grown and matured together creating a special bond that will last.”CreditJacob Biba for The New York Times

On Dec. 13, during a snowy ski vacation in Big Sky, Mont., they were hiking on a back trail with his young nephew when Mr. Griswold was overcome by the scenery. “I hadn’t planned an exact time but the location was remote and beautiful,” he said.

They were married Nov. 11 by Jay Steffel, a friend who was ordained by American Marriage Ministries, outside the Omni Grove Park Inn in Asheville, N.C., overlooking the Blue Ridge Mountains.

In her vows, Ms. Chua got a loud laugh from their 72 guests when she told Mr. Griswold, “I will listen to you.”

After Mr. Steffel pronounced them married, guests cheered the bride and groom, who were wrapped in a long kiss.

“Wes is not emotional, but Jean appreciates the little things, and pulls the greatness out of him,” said the best man, Glen Mabe, who believes that Mr. Griswold has become a better person since he met Ms. Chua. “Through good and bad times, they have grown and matured together creating a special bond that will last.”

FacebookshareGoogle+sharePinterestpin it
How to stop bleeding on Depo-ProveraCheck In: Hotel Review: The Figueroa, Los Angeles
Latest