Vows: How Did They Know? (The Signs Showed the Way) 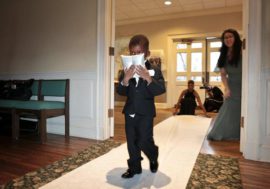 In the spring of 2017, Elisabeth Walley had come to wonder if she was meant to live her life as a single woman.

Just a couple of months earlier, on Good Friday, she was seated in a front seat at Hillsong Church during a service in Manhattan when a young man approached her. Ms. Walley, who is a community outreach manager at the church, said she thought he looked familiar. How did she know him? `

The young man, Delvon Worthy, had been sitting farther back in the church when he noticed a light shining on a pretty woman in the front row. (“It was a stage light,” Mr. Worthy said, “but it was still a light.”) 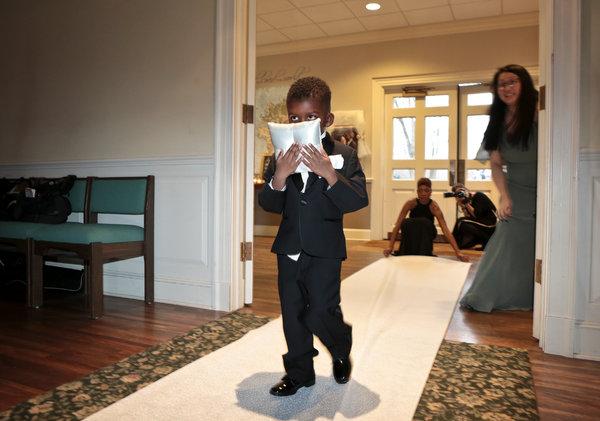 The couple’s ring bearer makes his entrance.CreditMichael McAndrews for The New York Times

Mr. Worthy, 32, believes in signs from the divine. He believes in stars that lead people to where they want to go. And he believes unfailingly in the power of faith.

The moment he met Ms. Walley, he was bowled over by her beauty, her sweetness and the warmth of her smile. He summoned the power of all his beliefs to gain her attention.

As with most good love stories, he wasn’t looking for romance when it struck. But perhaps it was the right time for him.

Perhaps it was the right time for her, too. That spring, she had been walking past the Hudson River and made a wish: that someone special would walk with her there. She passed the restaurant P.J. Clarke’s, and wished for a date to dine there.

The bride and groom, each 32, went to Wake Forest but didn’t meet there. They connected in 2017 when both attended Hillsong Church services in New York.CreditMichael McAndrews for The New York Times

Mr. Worthy, a former staff member of the Clinton Global Initiative who works in philanthropy in Bentonville, Ark., had spent his career helping others. As a child in Syracuse he attended church every Sunday, sometimes twice on Sunday, always dressed in a three-piece suit. He volunteered at hospitals, nursing homes and after-school programs throughout grade school and high school.

Yet when Mr. Worthy showed up, Ms. Walley couldn’t see past her own fears.

She did know him, though. The two had been students together at Wake Forest University in Winston-Salem, N.C. They had both traveled around 700 miles to attend the school; Mr. Worthy from Syracuse, Ms. Walley from Chicago. They had not been friends, although their circles had intersected in numerous ways. Mr. Worthy thought perhaps they had sung in choir together, but couldn’t remember; Ms. Walley thinks she recalls passing him on campus. On a campus of 8,000 undergraduate and graduate students that included only a small percentage of students of color, they did not meet.

So many coincidences happened along the way when they first began dating that the groom had only one explanation: “God was helping me out along the way.”CreditMichael McAndrews for The New York Times

Yet here they were, in New York City, population 8.6 million, meeting. For Mr. Worthy, that was a sign from the divine.

He asked if she would like to get together. Ms. Walley, noncommittal, said sure. But her time was taken up with work, friends and commitments. She gave him her phone number. “I wasn’t intrigued,” she said. “He was just a guy I knew who went to Wake Forest.”

He began texting and calling; he was relentless. Such behavior was uncharacteristic.

“He is a classic Southern gentleman, even if he is from Syracuse,” said a friend, Joseph Tillman. (Mr. Tillman’s wedding was featured in Vows on Feb. 12, 2016.) “He’ll go to soup kitchens and help people. He’s a good guy. And when he met her, he just knew.”

After two months of prodding, she finally agreed to have lunch with him.

Then she thought about it. “I said, Whoa! Was that him asking me out on a date?” Ms. Walley recalled. She considered backing out, but didn’t know how. She said, “I can’t say I’m not available now after I already said I was. I can’t change my phone number because that would be rude.”

The couple’s cake, which sat on a table at their reception at Whitby Castle in Rye, N.Y.CreditMichael McAndrews for The New York Times

They went to Cafe Luxembourg, a French bistro on West 70th Street. Mr. Worthy was encouraged. Two weeks later, he mentioned to Ms. Walley that he was making reservations for Flame, an Upper West Side hibachi restaurant, on Monday, her only night off. (He had remembered.) Caught off guard, she agreed to accompany him. To her surprise, they talked for hours.

After dinner, he suggested a walk through Central Park. Ms. Walley is a Central Park devotee, so she couldn’t say no. As they passed the Metropolitan Museum of Art, she mentioned that the museum was also one of her favorite places. Mr. Worthy told her he had never visited the Met; could she give him a tour?

She quickly agreed, but not just to spend time with him. “Any excuse to go to the Met,” she said.

For her, there was no star in her sky leading her to love. Not yet.

Ms. Walley pays attention to life in the moment, even if she isn’t quite sure where it is taking her. “She is adventurous, with a wanderlust; she sees the glass as half full,” said a friend, Trayonna Floyd. After graduating Wake Forest, Ms. Walley attended Hillsong, a Bible college in Australia, for three years. She loves theme parks and Marvel superheroes, has traveled to South Africa for church trips, and is “a very strong personality, very independent,” said her sister, Naomi Walley, a Broadway actress who is now appearing as Liz in “Chicago.”

Ms. Walley wore a lace and satin Allure gown found at Eva’s Bridal International in Chicago. Her mother and grandmother surprised her by purchasing the dress.CreditMichael McAndrews for The New York Times

After the success of the hibachi evening, Mr. Worthy and Ms. Walley made a date for the Met. Once the day arrived, after they had walked the Met, Mr. Worthy said they needed to hurry to get downtown. He wouldn’t say why. But when they arrived at One World Trade Center, a.k.a. the Freedom Tower, Ms. Walley felt a twinge. “I had never visited the Freedom Tower but had always wanted to,” she said.

He took her for a walk by the Hudson. He took her to P.J. Clarke’s. Ms. Walley was dumbfounded. “How did he know to do these things?” she recalled asking herself.

On the next date, Mr. Worthy brought a bouquet of sunflowers. She had never told him they were one of her favorites.

How did he know?

His only explanation: “God was helping me out along the way.”

Ms. Walley was now on board. “I could tell that certain things in my heart were shifting a little bit,” she said. “It became evident to me that there was something going on here that was bigger than both of us.”

The Whitby Castle in Rye, N.Y., was aglow as the reception took place inside.CreditMichael McAndrews for The New York Times

She orchestrated a fried-chicken dinner, her specialty, so Mr. Worthy could meet her sister.

“I said, ‘Whoa! She’s running him by me,” Naomi Walley said. “This might be more serious than I thought.”

Naomi Walley watched as her sister, inexperienced in the rituals of romance, flirted with Mr. Worthy. “She did not have any experience with the opposite sex whatsoever,” Naomi Walley said. “But here she was, and I didn’t have to coach her. During the course of that picnic, I knew they were going to be together.”

For the next several months, Mr. Worthy and Ms. Walley strolled in Central Park, watched movies, and attended Hillsong services. This past August, in front of thousands of attendees at a Hillsong conference at the Barclays Center in Brooklyn, Mr. Worthy proposed to Ms. Walley. She said yes.

They were married Dec. 15 at the Greenwich Baptist Church in Greenwich, Conn., by Kane Keatinge, an associate pastor for Hillsong. On the way to their reception at the Whitby Castle in Rye, N.Y., stars twinkled through gaps in the clouds. But on this night two lights shone brightest.

“God had a purpose and a plan,” said Margaret Worthy, the groom’s mother. “In a city of millions of people, they finally met.”

FacebookshareGoogle+sharePinterestpin it
gender letter: 2018: Year of the Woman, in 5 Powerful QuotesWhat Foods Are Banned in Europe but Not Banned in the U.S.?
Latest