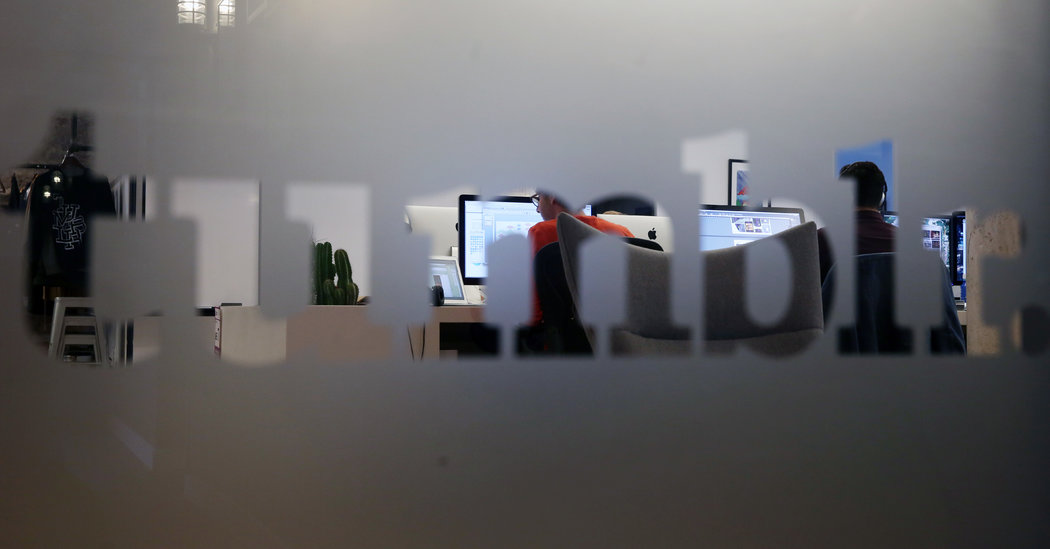 Elle Chase, 49, has run Lady Cheeky, one of the most celebrated pornographic blogs on Tumblr, for eight years.

It features short video clips, often focused on female pleasure, that she sources from around the internet. Celebrated by Glamour and Cosmopolitan as a great sex blog for women (Cosmo lauded its GIFs as “classy and smart”), Lady Cheeky has over 200,000 followers and gets two million page views a month.

But Ms. Chase will soon have to take her classy GIFs elsewhere.

Tumblr announced on Monday that, starting Dec. 17, what it calls “adult content” will no longer be allowed on the website. The company, which is owned by Yahoo, is defining adult content primarily as photos, videos or GIFs that “show real-life human genitals or female-presenting nipples, and any content — including photos, videos, GIFs and illustrations — that depicts sex acts.” (Tumblr will continue to allow images of breast-feeding and nudity in art.)

The reaction from users was swift. A Change.org petition started by someone who identified as a NSFW (short for “not safe for work”) Tumblr artist drew hundreds of thousands of signatures in just two days, with many commenters decrying the decision. But critics applauded the move, citing the site’s lax policing of piracy and arguing that Tumblr does not do enough to keep minors from having access to pornography.

In interviews, creators and proponents of pornography on Tumblr expressed a mix of outrage and resignation. Many said that they planned to leave Tumblr for other platforms but were not sure where they would go.

“I don’t have to worry about seeing something objectifying and terribly jarring,” Ms. Smith said. “It just feels like a safe space where things were curated for a variety of different social backgrounds and ethnic backgrounds.”

Founded in 2007, Tumblr reached its heyday around 2012, and hosted 108 million blogs the following year, when it was acquired by Yahoo. It wilted under the company’s leadership and is broadly acknowledged to be on the decline.

Still, some of its most faithful users have remained loyal to the platform for the pornography. According to a 2017 study that analyzed Yahoo data from 2015, approximately 100,000 producers on Tumblr generated sexually explicit content and 30 million people engaged with it.

“Most of the popular content was coming from professional producers,” said Luca Maria Aiello, one of the authors of the study and a former researcher at Yahoo Labs.

That content often appeared as GIFs — looping, second-long videos pulled from pornography produced by others — and were shared across the platform on blogs like Lady Cheeky.

Jorge España, a 24-year-old resident of Mexico City who hosts a Tumblr page called Stunner Pone, which featured what he calls “naughty furry art” (sexualized drawings of cartoon animals), said that outsiders could not understand how much work went into sites like his, and how much of a niche it filled.

“It may not be to their taste, and that’s fine, but trying to pretend that there isn’t a user base that craves this kind of content and goes to Tumblr specifically for it is misguided at best,” Mr. España said.

Tumblr was also a home for many L.G.B.T. pornography blogs, including that of Steven Toushin, 72, whose Tumblr, Bijou World, was an extension of the film and merchandise empire he has been running since the late 1960s.

Mr. Toushin said that Tumblr’s ban was a story that was familiar to him from his decades in the pornographic film industry. Any time a small, unregulated platform was acquired by a bigger one, he said, the new company would invoke a “morality clause” and attempt to shake people like him from using it.

“We try to find platforms to sell our product,” he said. “That’s all you can do is look for distribution platforms.”

But loosely regulated distribution platforms can also harbor illegal content — in this case child pornography, which Tumblr said caused Apple to remove its app from the App Store in November.

A source familiar with Tumblr’s decision to ban pornography, who was not authorized to speak publicly, said that the decision had been in the works long before that.

Mary Anne Franks, a professor at the University of Miami School of Law and the legislative and tech policy director at the Cyber Civil Rights Initiative, said she has been asking Tumblr to address nonconsensual pornography on the site for years.

“If five years ago they had gotten a handle on nonconsensual pornography or the child pornography issues, maybe they wouldn’t have to resort to something so extreme,” Ms. Franks said.

Stoya, a pornographic film performer who maintains a Tumblr, said she has been contacted by underage users on the site.

“I got a message from a 16-year-old Irish girl,” she said, adding that she asked her to “come back in two years.”

Stoya thinks Tumblr’s ban ignores a larger problem. “Let’s think about what can actually be done here that would result in a world where people have better tools to navigate sexuality,” she said.

Few expect Tumblr’s decision to decrease the amount of pornography online. Many users predict the content will just migrate elsewhere.

But none were “as good as Tumblr at the moment.”

FacebookshareGoogle+sharePinterestpin it
Why Is Obamacare Enrollment Down?Elizabeth Warren Stands by DNA Test. But Around Her, Worries Abound.
Latest