Trump’s Assault on Obamacare Could Undermine His Own Health Initiatives 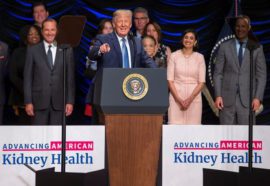 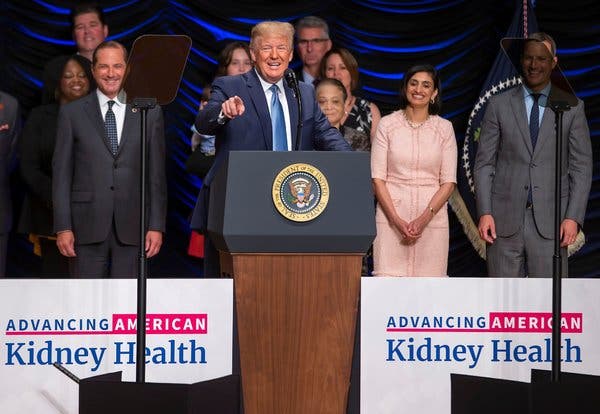 President Trump during a signing ceremony Wednesday for an executive order on kidney disease.CreditErik S Lesser/EPA, via Shutterstock

In court, the Trump administration is trying to get all of Obamacare erased. But at the White House, President Trump and his health officials are busily using the law to pursue key proposals.

Last week, the president highlighted a policy in the works meant to narrow the gaps between what drugs cost in the United States and overseas. On Wednesday, he signed an executive order to transform care for patients with kidney disease.

Both measures were made possible by a provision in the Affordable Care Act, and both would be effectively gutted if the administration’s position prevailed in court.

In between, administration lawyers told a receptive panel of judges in New Orleans that the entire Affordable Care Act should be overturned.

“What they’re doing now is tolerating this ambiguity between the flat-out rhetoric of ‘repeal Obamacare’ and the reality that they love many aspects of what was enacted in the Affordable Care Act,” said Dan Mendelson, the founder of the health care consulting firm Avalere Health.

The crucial provision is known as the innovation authority. It allows Medicare and Medicaid to test strategies for paying for medical care in pursuit of ways to lower costs and improve the quality of care.

It is a very broad authority. Before Obamacare, most changes to Medicare required special legislation from Congress. Congress can move slowly, and medical industries tend to oppose provisions that would result in less spending on treatment. With the innovation authority, the Department of Health and Human Services can introduce various experiments, and it has the power to take successful pilot programs national, without involving Congress.

That’s a power that has been welcomed in an administration that has embraced broad executive power. Obama administration officials liked the innovation center power, too. But the Trump administration has gone further, experts said, in pursuing a variety of interesting ideas about how to reform health care delivery.

Alex Azar, the secretary of Health and Human Services, has pointed enthusiastically to this authority at times, telling reporters last year that his “pen has a lot of power.”

When asked about the court case Wednesday, Seema Verma, a top deputy in the department, told Anna Edney at Bloomberg News that the department had a “plan in place” to preserve some parts of the health law even if the court overturned it. She mentioned the innovation authority specifically but did not give details on the plan.

Wednesday’s announcement on changes in kidney care featured an executive order and a speech from the president. But the meat of the proposal was four demonstration projects begun under the innovation authority. One was devised to reshape how kidney care providers are paid and would affect around half of all patients with renal disease, a sweeping change.

The president talked about another top health care priority last week: his desire to lower the cost of prescription drug prices. He mentioned a policy under review that would make some of the prices charged by drug companies more aligned with those in other developed nations. That proposal, too, was authorized under the Affordable Care Act’s innovation authority and would otherwise require a new law.

Other areas of experimentation include surgery, primary care and cancer treatment. Ashish Jha, a Harvard professor who studies changes in the health care delivery system, said the Trump administration had been ambitious and creative in trying new ways to use payment experiments to nudge medical providers toward higher-quality care.

But the administration’s position in court could jeopardize all those initiatives. If the Affordable Care Act is overturned, as government lawyers have pushed for, the innovation authority will go with it.

That outcome would undermine large parts of the administration’s health care agenda, Dr. Jha said: “I think the administration is going to be very hobbled in terms of their efforts to really improve the delivery system.”

FacebookshareGoogle+sharePinterestpin it
Chasing My Shadow as a Cancer Patient in Talk TherapyAn #Instaworthy Deal: Reformation, the Fashion Brand, Sells a Majority Stake
Latest