Truffles, Crab and Caviar: Preparing for New Year’s at the Warehouse of Expensive Eats 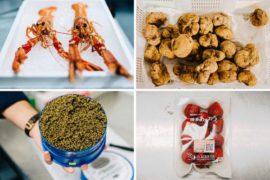 There is an industrial stretch of 37th Street in Long Island City, Queens, just off Queens Boulevard where you can walk and suddenly be hit with the most incongruous of odors: the pungent, earthy smell of truffles.

You have arrived at the nondescript warehouse of Regalis Foods, which sells fine truffles and other expensive wild foods.

Inside, the truffle smell is more intense and the work pace is on full holiday bustle.

“The week before New Year’s is our busiest of the year,” said the owner, Ian Purkayastha, 26, who started Regalis at age 19 with a cooler in a beat-up minivan. He now supplies many of the finest restaurants in Manhattan — including Eleven Madison Park and Le Bernardin — which are typically packed for New Year’s Eve.

It also happens to be the tail end of white truffle season and the beginning of black truffle season in Europe, both products that Mr. Purkayastha has become a go-to supplier for among the city’s top chefs.

He imports and distributes some $200,000 worth of white truffles per week in late December, he said.

He was in a spacious, refrigerated room he called “our wild edible room.” It stores 10 varieties of truffles, as well as other “super, super perishable” items, like Japanese Wagyu beef and Japanese strawberries, which sell for $50 per dozen, he said.

White truffles are so expensive because they are available in such limited supply.

“No one’s ever been able to successfully cultivate white truffles, so all we have are wild-foraged ones,” he said, grabbing two grubby-looking lumps that resembled smallish potatoes.

Selling wholesale to restaurants, he charges $1,600 to $2,000 per pound for white truffles and up to double that rate in lean cultivating seasons when the supply is short.

But the business is tricky. Once foraged, truffles begin to dry and lose precious grams of weight — evaporation can diminish the value of a single shipment by several thousand dollars a day.

“Evaporation is a huge issue,” said Mr. Purkayastha, who uses scales favored by cannabis dealers for their precision. “You figure 10 to 15 percent is going to evaporate. So if you start with 20 pounds of truffles and by the end you have 18 pounds — at $2,000 a pound, it really adds up. So the clock is constantly ticking.”

A truffle can spoil within a week of harvesting so keeping the storage unit humid and cool — 36 degrees — is vital.

Rushing the goods to customers is so paramount that Mr. Purkayastha said he budgets $50,000 every year for parking tickets incurred during deliveries.

Also in the chilled room were many varieties of wild mushrooms — black trumpets, porcinis, hedgehogs, morels and chanterelles — and other rarities including fresh wasabi from Japan, which runs $175 a pound.

Mr. Purkayastha also handles seafood; he grabbed a net, dipped it into a 1,500-gallon salt water tank and pulled out a 10-pound Norway King crab, a variety that he sells to restaurants for around $45 a pound. 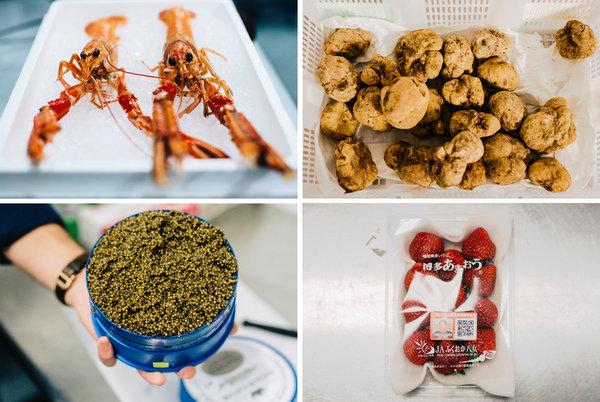 Much of the king crab that Americans eat is precooked and pasteurized, and then frozen, he said, “so it loses a lot of flavor and winds up tasting super bland.”

The seafood is generally shipped live by air, he said. During transport, the sea creatures are kept in wood shavings, often with oxygen pumped into the crates.

Mr. Purkayastha’s tank is filled with natural salt water brought by a tanker truck from Long Island Sound and is kept at 43 degrees.

He scooped out other seafood varieties, including huge Japanese prawns, known as kuruma. They go for $85 per pound, mostly to sushi restaurants.

He pulled out a rock crab from California with a lovely speckled shell and a pair of California spiny lobsters with deep black and red shells. The lobsters are exported to Chinese markets and are hard to find domestically, he said.

A pair of Norwegian langoustines resembled a spiny, skinny version of a typical restaurant lobster.

“Texturally, the meat is nicer” than a regular lobster, he said, “and the flavor is super, super clean, no fishiness.”

Mr. Purkayastha said he also had partnerships with sturgeon farms in California and Idaho that produced caviar. He pulled out a large jar of the fish eggs, 1.8 kilograms that costs $7,000.

Mr. Purkayastha grew up in Houston, and Fayetteville, Ark., where an uncle taught him how to forage for mushrooms.

A taste of truffle ravioli at age 14 began the fascination with truffles, and by 15, he was buying small shipments from Europe to sell to fine restaurants his parents would drive him to.

By 17, he moved to New York and began transporting his truffles in a cooler on wheels. He would visit upscale restaurants in Manhattan and try to convince chefs to sample his products.

The renowned restaurateur David Chang, the founder of Momofuku restaurants, recalled being impressed by the tenacity of the teen with fine products.

“He must have been 18 and he was just really persistent,” Mr. Chang said.

“The fact that he was so young was always unnerving to everyone,” he added. “But his product was extraordinary, so I trusted him to get me stuff. He continually got very high-quality products.”

Early on, Mr. Purkayastha and his cooler were set upon by a group of young men who may have thought he was transporting beer but were disappointed to find only a few potato-looking lumps.

“They were like, ‘What the hell is this?’ as $15,000 worth of truffles rolled out into the street, into traffic,’” recalled Mr. Purkayastha, who soon began delivering in an aging minivan that was often given tickets and towed.

These days, he has 10 delivery trucks and he spends his time tracking and inspecting orders, checking out new suppliers and managing a line of products that includes truffle-infused oils and sauces.

His dog, Mabel, has the run of the warehouse. She is a Lagotto Romagnolo, a breed often trained to hunt truffles in the forests of Italy and Eastern Europe.

Pigs were often used for that purpose, Mr. Purkayastha said, “but too many hunters were losing fingers, trying to pry truffles out of the pigs’ mouths.”

FacebookshareGoogle+sharePinterestpin it
Trending: How Airlines Are Catering to Their Smallest Customers: ChildrenBarack Obama’s Favorite Book of 2018 Was ‘Becoming.’ Here’s What Else He Liked.
Latest