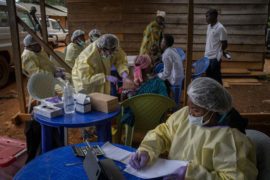 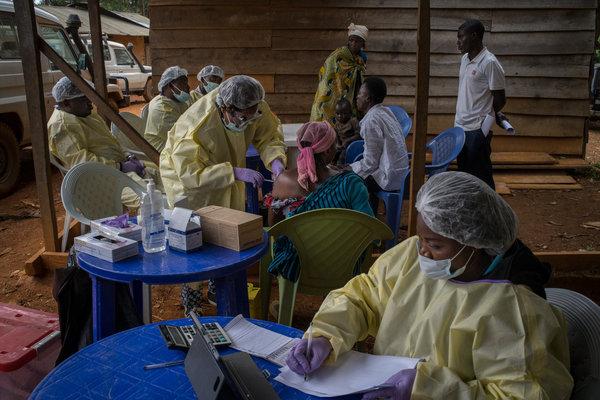 A vaccination team administering the Ebola vaccine to residents of the Kanyihunga district in Congo, starting with those who had recent contact with Alphonsine Kahindo Kambere, the most recent local victim.CreditDiana Zeyneb Alhindawi for The New York Times

LUSEGHE, Democratic Republic of Congo — Four health workers threaded their way cautiously down a steep valley in their rubber boots, into a forest so thick and so tall that the air around them turned suddenly cool, trying to reach a remote village in the eastern part of the Democratic Republic of Congo where a woman had recently succumbed to Ebola.

Dr. Kasereka Bernardin, a vaccinologist, looked over his shoulder, made the sign of the cross, and acknowledged that the lethal virus was not his most immediate fear.

“We’re scared of the Mai-Mai,” he said, using a local term for militias, his forehead lightly beaded with sweat. “We’re afraid they might kill us.”

The trip had already been delayed by clashes between government forces and a militia group in the surrounding Kanyihunga district, an emerging hot spot in a new outbreak of Ebola, and nerves were on edge. The team — an epidemiologist, two contact tracers and Dr. Bernardin — had not been able to line up guarantees of safe passage from the militia leaders, or even to make contact.

As concerned as they were about security, however, with every passing hour, the doctors were even more fearful that the deadly virus could spread to the entire village, Luseghe — or, worse, expand beyond its borders.

There have been many hopeful advances recently in the battle against the deadly Ebola virus. A vaccine is now available, and experimental treatments appear to be helping to save lives. With international help, Congo was able to quickly snuff out an earlier outbreak in its Équateur Province this year.

Yet eastern Congo, teeming with no fewer than 100 armed groups, has been gripped by near-constant conflict since the uprising that led to its independence in 1960, as well as the 1994 genocide in neighboring Rwanda and the civil war soon after that eventually established the regime of Joseph Kabila.

Millions are thought to have died from the chronic violence, many of them at the hands of government forces. The insecurity is frustrating efforts to combat this latest Ebola outbreak — now the second largest in history, after one that tore through West Africa from 2014 to 2016, claiming 11,310 lives — making the current crisis almost entirely manufactured.

Ebola still kills most of the people who contract it. Since the outbreak here was declared in August, health officials have recorded 583 confirmed and suspected cases as of Dec. 25. About a third of the patients have recovered, while 354 have died.

Congolese health officials and their international partners expect the fight against Ebola to drag on well into next year. The biggest worry is that, unchecked, the epidemic could reach Goma, the regional capital.

“If it hits Goma, we’re done for,” said Dr. Jean-Christophe Shako, the director of a local Ebola response team whose tasks require negotiating with the militia so that health workers can enter their territories and have their safety guaranteed. The city sits on a busy border with Rwanda and has an international airport that could disperse the disease globally.

The people in the Ebola zone are deeply suspicious of outsiders, whether government soldiers or health workers, and they often shun visitors, sometimes threateningly. Before setting off for Luseghe, the health workers discussed the security risks animatedly, and particularly whether it was safe to bring along two Western journalists.

They finally decided it was safe enough, and as we headed toward Luseghe, we could not help but wonder what sort of greeting we would receive.

Leaving Butembo, a bustling city in eastern Congo, the shops quickly give way to woods. The region is mountainous, with plunging valleys packed with eucalyptus, avocado and banana trees, their broad leaves blocking sunlight from the dark entrails of the forest.

The vegetation grew so dense that it was hard to see more than a few feet in any direction to make out what — or who — might be lurking there.

At length, as the road dwindled, the soldiers and police officers who had been escorting us turned around. From there, we would proceed to Luseghe on foot and without escort, as the health workers needed to show their neutrality to the villagers.

As we approached Luseghe, we had reason to be apprehensive. Ordinary citizens are routinely brutalized by armed groups but equally by government forces, who are accused of exacting illegal taxes and raping and killing civilians with impunity. Many of the Mai-Mai began as self-defense groups formed to protect villages against marauding soldiers.

Civilians often do not know whom to trust, and end up fending off all outsiders. When the police recently tried to take an infected two-week-old baby from his family, the child’s grandmother charged out of her house with a machete and threatened to kill them.

Suspicions have been compounded by local opposition politicians who have exploited the crisis ahead of national elections this month, spreading rumors that Ebola was concocted by the government to exterminate them. The thermo-guns aimed at people’s foreheads to take their temperature, the politicians say, are weapons to steal votes. Ebola, they also sometimes say, was brought in by foreigners.

As the director of an Ebola response team, Dr. Shako is at the heart of the effort to contain the disease, and he is deeply concerned that violence is frustrating, even halting, efforts to rescue people.

“I’m worried because I don’t know how to reach these people who need our help,” Dr. Shako, 49, said quietly in his office in Butembo. “We need to save them.”

The outbreak started in the rural town of Mangina, health officials say, and was spread by members of a single extended family. Because of persistent rumors that they would die if they went to a treatment center, they had fled to avoid the authorities.

The virus then raced through informal health centers, where traditional healers keep few records of their patients, making it difficult for the authorities to trace and break the chains of transmission.

The region’s endless wars have added a line to Dr. Shako’s job description — diplomat. Before he can do his work in biomedicine and epidemiology, he first seeks to persuade armed groups to open up their territory and guarantee the safety of health and aid workers.

It can be a risky business. Acts of violence erupt in unpredictable bursts, with civilians often bearing the brunt. A couple of weeks ago, for instance, a notorious rebel group hacked to death a dozen civilians for no apparent reason, and killed an additional 17 soldiers who tried to retrieve the bodies. Just a day ago, another four civilians were killed in a separate attack.

Dr. Shako says he picks his words carefully when approaching the militia leaders, who are wary of government ruses. “One little misplaced word and you can unravel everything,” he said, adding that he tells them, “the virus, the enemy, is stronger than us.”

He has even put on dirty clothes and brought soap to meetings with the militias. “They get angry if they see someone who is cleaner than they are,” he chuckled. “Really.” The process can take days, but in most cases the militias ultimately accept that the doctor is trying to help.

Dr. Shako, a short man with a slight stoop, walks around with three cellphones, usually all in one hand. Occasionally, he will talk with a phone at each ear, the third tucked under his arm, giving orders or berating someone for not doing a job properly.

In moments of levity, he often peppers his conversations with interjections, to the obvious amusement of his entourage. “What? He escaped?” he replied to a colleague who recounted a story about an Ebola sufferer who had fled a treatment center. It is not that they flee, he said, as everyone chuckled, they just walk out because no one wants to touch them.

“This is my life mission,” said Dr. Shako, who had originally trained as a priest but switched to medicine after witnessing the suffering of children during a cholera outbreak.

“I want to be on the ground with people who are suffering,” he said, adding that he sleeps only four hours a day and has not taken a day of rest since he took charge of the local Ebola response team in August. “Of course,” he added, “if you’re held hostage, just do as you’re told.”

Often, though, he needs to take chances. The chief in one village, Dr. Shako said, has not set foot there for three years, for fear of the Mai-Mai.

“He refused to accompany me, so I went alone,” he said, adding that he eventually persuaded the militia leader there to agree to protect the health workers. “I can’t leave a people just like that because of the Mai-Mai. It is our responsibility to try to negotiate with them.”

Nevertheless, by the time his team reached that village, it had 47 confirmed and suspected Ebola cases.

The latest delay in the Kanyihunga area because of the fighting “means we’ll now have a lot more cases, because who knows how many people she may have infected in the meantime,” he said of the victim, Alphonsine Kahindo Kambere.

When they finally can get to the sick, the health workers have an impressive array of new treatments to draw on. Four drugs are in trials in Congo, and health care groups say they all seem to be working.

The Alliance for International Medical Action, a French aid organization, has developed “bio-secure” plastic cubes where patients needing intensive treatment are placed. The cubes reduce the risk of contamination and allow medics to treat patients without having to wear protective equipment.

Health workers have also taken steps to respect local traditions, helping to break down barriers that can get in the way of treatment. This can be something as simple as burying the dead in body bags placed inside coffins, instead of placing victims into a grave in just body bags.

Ebola survivors, who are immune to the virus and growing in number, are being recruited to look after and nurture orphans who were infected by their parents.

Back on the outskirts of Luseghe, we were greeted by Didi, a nephew of the Ebola victim, Ms. Kambere. He led the group up to a grassy patch in front of the deceased woman’s house, where family members had gathered to mourn.

Our concerns about a cold, or even threatening, reception from the villagers proved unfounded. Most sat calmly, dressed in their best attire, eating and chatting.

Didi, who had nursed his aunt and was most likely infected with Ebola, had persuaded the villagers to consider treatment. He said he was impatient to get the vaccine, wrongly thinking that could save him. “I know it’s not an imaginary illness,” he said, gesticulating. “I’ve seen it with my own eyes.”

Dr. Bernardin, the vaccinologist who had been so apprehensive about visiting the village, listened and wiped his brow, looking relieved.

Having assured themselves that the village was safe, the doctors made plans to return the next day to disinfect Ms. Kambere’s house. They then tried to persuade the villagers to go with them to get vaccinated or treated, something that had to be done back in Kanyihunga.

A handful, Didi among them, agreed. Off they went, back up the valley, where health officials were waiting for them.

Health workers on the last leg of their trek to Luseghe. “We’re scared of the Mai-Mai,” one said of the local militias. “We’re afraid they might kill us.”CreditDiana Zeyneb Alhindawi for The New York Times
FacebookshareGoogle+sharePinterestpin it
Tech Fix: The Tech That Was Fixed in 2018 and the Tech That Still Needs FixingWhenever I Wear These Jeans People Ask Me Where I Got Them
Latest