Tony Awards Red Carpet: Dresses to Impress, and the Men Wore Them Well 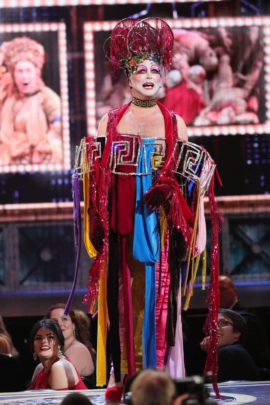 Billy Porter has been shutting down red carpets all year, cutting through seas of traditional gowns and tuxes in gender-bending, head-turning garments.

In January, he owned the Oscars’ red carpet in an enormous, perfectly tailored tuxedo gown. In May, at the Met Gala, he wore a bodysuit dripping in gold with massive golden wings, and a 24-karat-gold headpiece. He was carried by six shirtless men in gold trousers.

The Tony Awards red carpet on Sunday was no different, except this time Mr. Porter wasn’t alone in challenging gender norms.

[“Hadestown triumphed at the Tony Awards.]

Some expressions were subtle — Jeremy Pope, the star of “Choir Boy” and “Ain’t Too Proud,” and Michael Urie, the star of “High Button Shoes,” wore suits adorned with ruffles — but others, like Mr. Porter’s, were undeniable.

Mr. Porter wore the literal embodiment of Broadway: the red velvet curtain that once rose and fell on stage for the entirety of his Tony-winning “Kinky Boots.” He starred in more than 1,000 shows before the musical closed in April. 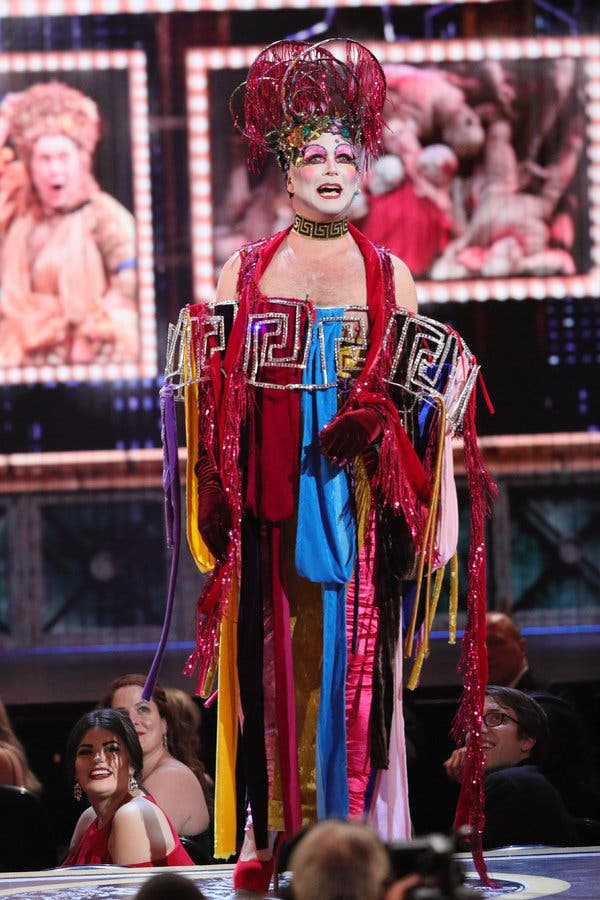 The hand-sewn Elizabethan gown, which incorporated plenty of pink, was created by Celestino Couture — the designer Sergio Guadarrama and the creative director Cade Johnson — which works with upcycled fabrics.

The gown includes thousands of embroidered flower clusters, a corseted bodice and a skirt that mimics a bloom, opening to a pair of cigarette pants also made from the curtain.

“I want to flip the question of what it means to be a man,” Mr. Porter told The New York Times in the week leading up to the event.

The gown also came with a built-in (well, sewn-in) message: an embroidered uterus to represent “empowering women’s reproductive rights” — a suggestion made by Mr. Guadarrama.

In January, ahead of the Golden Globes, Mr. Porter told The Times that he realized he had always had a “gender-fluid sensibility” with clothes. “It was so squashed by homophobia,” he said. Mr. Porter stars as Pray Tell from the FX series “Pose,” which employs a large cast of mostly queer and transgender actors.

On Sunday’s red carpet, Mr. Porter, who’s presenting at the Tonys for the first time, said: “I’m not doing it for show. It’s inside of me. It’s who I am.”

“It’s great to have been given a second shot for mainstream success,” he went on.

Of the rainbow of flowers that served as a backdrop to the red carpet for L.G.B.T.Q. Pride Month, Mr. Porter said: “It’s about the community coming together. It’s about us understanding that we’re not free until we’re all free.”

Another dramatic entrance on Sunday was that of Taylor Mac, the maestro of the play “Gary: A Sequel to Titus Andronicus.” Mac first saw the gown — made up of strips of red, yellow, blue and purple fabric — on Saturday. It was designed by a longtime collaborator, the costume designer Matthew Flower, a.k.a. Machine Dazzle.

Around Mac’s shoulder was a metal, sparkling shawl in a squared, spiral pattern. Mac also wore a full face of theatrical makeup and a shimmering multicolored head piece that resembled a fountain, calling the look “Greek, Roman inspired.”

A performance artist who was nominated this year for “Gary” (it opened in April), Mac has long snubbed traditional notions of gender and uses “judy” as a pronoun.

“I don’t think there are any rules other than the ones you set for yourself,” Mac said on the red carpet. “I spent too many years being a cater waiter to enjoy wearing a tux. If there’s an opportunity to present art to the world, you should take it.”

Jordan Roth, a prominent Broadway theater owner and producer, wore an outfit that was fiery red from head to toe, including a floor-length red sequin cape. It was created by Clare Waight Keller of Givenchy and inspired by the musical “Hadestown.” He said he sees his red carpet appearances as “short performance pieces” that allow him to express who he is.

Mr. Roth said that these days there are fewer rules governing gender expression at these high-profile events — but only if you allow yourself to go against the grain when it comes to apparel.

“The strongest rules come from within and those are the hardest to break,” he said, “Every time you do, it gets easier and it feels better and better.”

FacebookshareGoogle+sharePinterestpin it
Medical News Today: Magnetic stimulation may reduce the impact of concussionSuiting Up Hockey’s Stars, One Stitch At a Time
Latest