Tinder and Bumble Are Hungry for Your Love 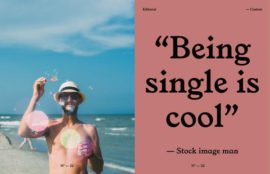 Tinder and Bumble are desperate to convince you that you’re not desperate. Dating, they promise, is fun, so fun, that when one date ends badly, it’s a barely disguised blessing: You get to stay on the apps and keep on dating!

Both companies are pushing this message with recent advertising efforts. Tinder has a new publication, Swipe Life, specializing in personal essays that reinforce the idea that dating misadventures are cool, or at least exciting, invigorating and youthful. (Swipe Life says downloading Tinder is a milestone in human life akin to buying your first beer and losing your virginity.)

Bumble is selling itself as a means to personal betterment and greater sophistication. It is profiling good-looking, high-achieving New Yorkers on articles on its blog, the Beehive, and on bus stops and billboards around New York City. The dating-slash-friendship-slash-networking app is hoping to sell users on various types of upward mobility. The right romantic partner is surely on the app, but making other connections could serve you just as well.

Other dating apps are also getting into the content business. Grindr has its own site, Into, on which it publishes original reporting, story aggregation and commentary; Hinge, as part of an advertising campaign last year, published short-form fiction on walls and billboards.

It’s as if the apps have realized we’ve become disenchanted with their ways, and now they’re making an effort to treat us right. They want to gain our trust, so we’ll settle down with them for the long haul.

After all, it’s been more than half a decade since they were invented, and if you’ve been single in the last five years, chances are you’ve used one. In its annual survey of 5,000 Americans, Match Group, the dating conglomerate that owns Tinder and OkCupid, found that singles met first dates on the internet more than through any other venue, and that 62 percent of millennials surveyed had used a dating app. 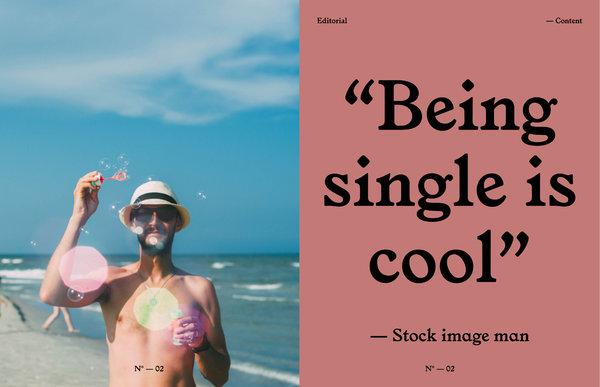 Tinder is the top dating app in the United States and worldwide, according to App Annie, the mobile data and analytics provider, and it tends to skew young. More than 50 percent of Tinder’s users are ages 18 to 25, the company said.

Elie Seidman, Tinder’s chief executive and the former head of OKCupid, said that the company wants to brand itself as the leader of early-life dating.

“We actually embrace the fact that our members are in that dating-as-a-leisure activity phase of life,” Mr. Seidman said. He added that, with the new editorial content, Tinder hoped to offer users a positive outlook on that landscape. Tinder relationships often don’t go anywhere at all — and that’s fine!

When Swipe Life began this fall, its articles sang of the exciting spontaneity of singledom. For example: “I Moved to L.A. for a Tinder Relationship That Lasted Two Weeks, But I Don’t Regret It — Here’s Why.”

[Relationships and advice. Beauty and health. Stories picked for you. Sign up for Of the Moment.]

The author, Belinda Cai, wrote that she visited Los Angeles in the summer of 2017, met a guy through the app, hung out with him twice, and then stayed in touch by phone. They bonded over their childhoods and “leftist ideologies.” Soon, she had moved from Ohio to live with him in California, but quickly found his apartment too messy, his “affinity for drinking” too gross and his “large hair-shedding dog” too destructive. As for their shared ideology? In the end, she wrote, he turned out to be “a total brocialist.”

Still, she praised Tinder for spurring her cross-country move, even though the relationship was a bust. “Little did I know, when I used the app last summer, I wasn’t swiping for love or anything crazy like that — I was swiping for change,” she wrote.

“GET ON TINDER,” reads the large, hyperlinked button at the end of the piece.

Many other essays published this fall ended when the writer became single once again, and, consequently, ready for more Tindering. In another article, a woman who dated her neighbor until she realized he had a drinking problem wrote, reflectively: “My time with my neighbor may have been fairly brief, but during those months, I think we actually gave each other exactly what the other one truly needed.”

Bumble in the Jungle

If Tinder has taken a page from the confessional style of sites like Thought Catalog or xoJane, Bumble’s strategy seems inspired by the Forbes’s annual 30 Under 30 lists. Its “Find Them on Bumble” campaign collects the 112 “most inspiring New Yorkers,” according to the company, and subtly links their success to Bumble’s services. (In addition to being the second-most popular dating app in the United States according to App Annie, Bumble connects people to new friends through Bumble BFF and with professional contacts through Bumble Bizz.)

In interviews, some of the campaign’s participants said that they had only joined the app as a condition of appearing on billboards and bus stops. That is to say, you could not “find them on Bumble” until shortly before Bumble said you could.

“A bunch of my friends work for Bumble,” said Noah Neiman, a 34-year-old co-founder of the boxing gym Rumble, whose face graces many a bus ad. (His mom has sent him a steady stream of photos of the billboards and posters featuring him in New York, even though she lives in Pittsburgh.)

Mr. Neiman is single, but when asked about whether he uses dating apps, he was explicit: “No,” he said. “No, no, no, no.”

“It’s the devil’s playground,” he said. “I try to avoid all that temptation.”

Todd Wiseman, another New Yorker featured in the Bumble campaign and the founder of the video production studio Hayden 5, said that he did use Bumble to find romantic prospects before he was chosen to embody the brand. If he could choose, though, he said: “I would prefer to meet someone out in real life.”

Still, the campaign is supposed to show that the app can be used to create all kinds of connections, romantic and otherwise, which explains why the “Find Them on Bumble” list includes so many people who are already partnered up. Maybe you cannot woo Alyssa Mastromonaco, the White House deputy chief of staff for operations under President Barack Obama, because she has been married since 2013. But perhaps she would be willing to network?

The ballerina Isabella Boylston, who is also in the campaign and also married, said that she was on Bumble’s BFF platform, though she politely declined to answer a question about whether she uses the app regularly.

On dating apps in general, she said, “I feel like I was already in a relationship when those kind of became mainstream.”

She added: “Otherwise I totally would have been on there, for sure.”

Alex Williamson, Bumble’s head of brand, said that the search to find the New York Bumble representatives was extensive.

“For years we’ve been talking about an opportunity to showcase our users and their stories,” she said. “While we love our product, our product in some ways is really our people.”

Not a Bad Gig

The move to publish stories about romance is smart. It’s a subject people like to read about. (See: the success of our very own Modern Love column!)

More generally, branded content is big business — kind of like editorial magazines used to be. Swipe Life, the Beehive and Into represent a small fraction of editorial content now being funded by companies. Snapchat sponsors an online publication, Real Life Magazine. The mattress company Casper started a digital site, Van Winkle’s, and last fall, pivoted to print, with a magazine called Woolly. Dollar Shave Club has Mel Magazine, Equinox has Furthermore and Airbnb has Airbnbmag.

Brands don’t always clearly disclose their exclusive sponsorship of their publications’ editorial content. Into, for instance, says nothing about Grindr in its URL, on its home page or even in its “About” section. It’s only when you click on an “Advertise” button that you are taken to a site explicitly associated with Grindr.

And these sites can certainly bring negative attention to their benefactors. In late November, Into reported on a Facebook post written by Grindr’s president, Scott Chen, that suggested he was opposed to gay marriage. Mr. Chen said in a comment on the site that the report was “unbalanced and misleading,” and that he should have been asked to weigh in.

More recently, an Into article that called a new music video by Ariana Grande “virulently anti-queer” and “transmisogynstic” was torn apart on Twitter; many users suggested the article was poorly argued and offensive in its own right. Into added an editor’s note and removed the author’s name, saying that she had received death threats and would be barred from writing for the time being. (The author, who seemingly deleted her Twitter account, could not be reached for comment.) Into later published a takedown of the original piece, calling it “cringe-inducing.”

With digital media companies like Mic continuing to lay off journalists en masse, Tinder, Grindr and other brands offer opportunities for young writers to make some money. Stephanie D’Agostini, a freelancer who has written for Swipe Life, said that she did not see Tinder’s website as any different from writing for sites like Refinery29.

And over the past few months, Swipe Life in particular has become more nuanced. One essay, “My Year-Long Love With an Undocumented Immigrant,” was messy, possibly exploitative and occasionally earnest. The piece did not end with the “Get on Tinder” button. It was a more subtle advertisement for the qualities with which Tinder hopes to be identified: personal growth, empathy and close connection that can feel difficult to find online.

Swipe Life received only 4,000 unique views on desktop in October, its first month, according to comScore. But mobile views, which comScore could not provide, are likely higher, and Tinder’s senior director of content, Kelsey Blodget, said that the company had been “pleasantly surprised” by the response to the site.

“This is definitely ancillary to the app,” she said. “The app is our core business. But this is something that we hope can accompany our users on their dating journey.”

Ms. Williamson said that Bumble’s campaign has been a success. Though she could not provide specific numbers, she said that the app had seen a “significant uptick” in users since the campaign started in October, and that the company would be choosing cohorts of spokespeople in other large markets.

The campaign, she said, was “a celebration of what we’ve been able to build” — even if that isn’t lasting romance.

“We really are trying to connect people to meaningful relationships,” Ms. Williamson said. “Whatever shape and form that looks like for you.”

FacebookshareGoogle+sharePinterestpin it
Modern Love: Tiny Love Stories: ‘We Need to End Whatever This Is’5 Places: Five Places to Go in Kigali
Latest