THOR wrangles complex microbiomes into a model for improving them 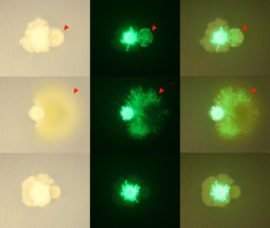 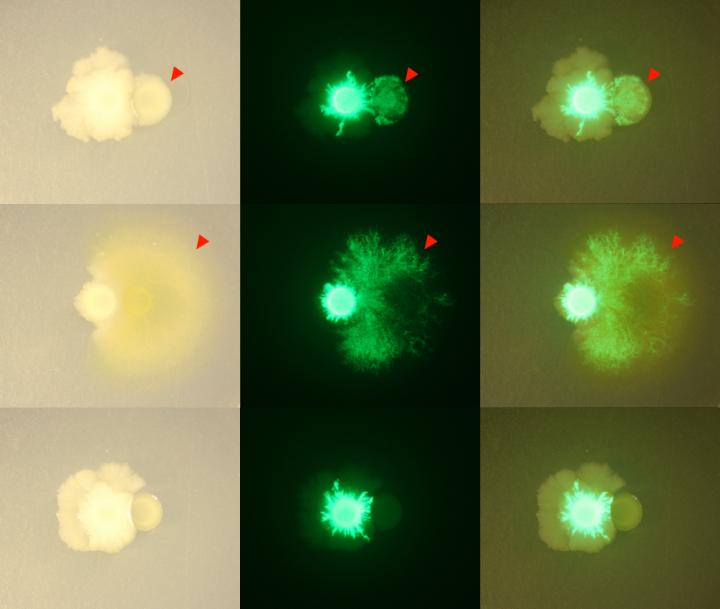 IMAGE: Bacillus bacteria, marked with green fluorescence, changed its growth pattern around other members of the THOR community, spreading around and over other bacteria. view more

MADISON, Wis. — «Microbial communities run the world,» says Jo Handelsman, director of the Wisconsin Institute for Discovery at the University of Wisconsin-Madison.

«People always laugh when I say that,» she adds. «But it’s true.»

Our rich new understanding of microbial communities and their influence on human health or crop productivity has led to the dream of changing these communities to produce benefits. In pursuit of that dream, millions of Americans now take probiotics, beneficial microbes they hope will improve their gut.

But the immense complexity and resiliency of these microbiomes leave researchers unsure how to produce predictable and long-lasting changes for the better.

New research by Handelsman and her collaborators addresses that complexity head-on. The team developed a community they named THOR, three species of bacteria isolated from soybean roots and grown together. The complex community of microbes developed new behaviors together that couldn’t be predicted from the individual members alone — they grew tougher structures known as biofilms, changed how they moved across their environment, and controlled the release of a novel antibiotic.

Each of the three members of THOR has a sequenced genome, and an array of tools are available to easily study the bacteria in isolation and together, which opens up opportunities to start unraveling the complexity of microbial communities like THOR and others. A better understanding of these microbiomes could help scientists figure out how to improve them.

The work is published March 5 in the journal mBio. The work was led by Handelsman lab postdoctoral researcher Gabriel Lozano with collaborators at the UW-Madison Department of Plant Pathology, Yale University and other institutions.

The thunderous name THOR stems from the members of the community: The Hitchhikers Of the Rhizosphere. Years ago, Handelsman’s lab noticed that several bacteria came along for the ride when members of common Bacillus bacteria were isolated from the microbiome of soybean roots, known as the rhizosphere. These hitchhikers only showed themselves when Bacillus bacteria were grown in the cold for several weeks.

Those tight associations between different species suggest they could serve as a model community to test how complex traits emerge when multiple species share the same space. The researchers settled on species from the Pseudomonas and Flavobacterium groups of bacteria to grow and study alongside Bacillus.

Combined, the members of THOR boasted some 15,000 genes and were capable of producing thousands of small molecules, creating «layers of complexity» over time and across space, says Handelsman.

When grown alone, the Pseudomonas member of THOR produces a biofilm, a hearty structure that protects the bacteria from its environment. Biofilms gum up implants used in medicine and make bacteria resistant to antibiotics. When all three members of THOR were grown together, the community produced two times as much biofilm and the biofilm lasted longer than when Pseudomonas was alone.

«Even when their populations are small, these other species are sparking larger biofilms,» says Handelsman.

Other complex traits emerged in THOR as well. The Bacillus member reduced the production of antibiotics made by Pseudomonas, protecting Flavobacterium from their effects. And the other members of THOR induced Bacillus colonies to grow out like the branches of a tree, spreading over and around the other bacteria in complex patterns.

Many efforts to manipulate microbiomes are focused on improving human health, and model communities like THOR could help scientists understand how complex microbial relationships can be altered to benefit us.

But THOR’s information about the microbiome of plant roots, the rhizosphere, is just as vital. The rhizosphere helps glue soil together, preventing erosion. And soil locks up three times more carbon than floats in the atmosphere, making it an important element in addressing climate change. Knowing how individual microbes come together to produce the rich, complex behavior of the soil microbiome may be a key to maximizing the benefit we derive from these unseen communities.

«It’s one of the most critical relationships we have,» says Handelsman.

This work was supported by National Science Foundation grant MCB-1243671.

FacebookshareGoogle+sharePinterestpin it
Tennessee House Passes Bill to Ban Abortion After Detection of Fetal HeartbeatMeasles Outbreak: 1 Student Was Not Vaccinated. 21 Others Got Sick.
Latest