Theaster Gates Is a Toast of the Fashion and Art Circuit 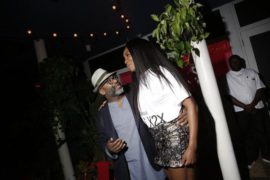 MIAMI BEACH — The image was arresting. Screened on a wall of the Freehand Miami hotel, it showed a bikini-clad woman playing volleyball on the beach. The blowup itself was not extraordinary, except that its subject was black.

That photograph, first published in Ebony and Jet magazines in the 1950s, ’60s and ’70s and now part of “The Black Image Corporation,” a Prada-sponsored art installation by Theaster Gates, was compelling enough to freeze Naomi Campbell in her tracks.

Sipping black tea on an upper floor of the hotel, the space tricked out like a midcentury living room in the tropics, Mr. Gates recalled Ms. Campbell’s reaction. “Naomi keeps saying to me, ‘Theaster, nobody ever showed me these images,’’’ he said. Growing up, as she told him, ‘all I saw was poverty, discrimination and protest images. Nobody ever told me that there was a black middle class.’”

Much less, she might have added, a middle class stylishly and un-self-consciously cavorting on the beach. So rare were such pictures in mid-20th-century America, so far outside the mainstream, that they were bound to strike onlookers, black or white, as alien, if not downright subversive.

“When you throw an 80-foot image of black people on the beach,” Mr. Gates said, “what you realize is that in our imaginations we haven’t seen black people playing volleyball on the beach.” Or for that matter, seen them visiting a haberdasher, primping at the mirror or simply gathering for cocktails in a lavishly appointed living room.

Even now, those portraits may seem brash and perhaps a bit unsettling. “There are Haitians in Miami,” Mr. Gates said, “who don’t go to the water because they think ‘this beach was made for somebody else. It wasn’t made for me.’”

That very audacity was a magnet to a gathering of high-visibility entertainers, athletes and tastemakers — Kanye West, Emma Roberts, Venus Williams and Chloë Sevigny among them — who paid court to Mr. Gates during a round of exclusive gatherings at the hotel during Art Basel Miami Beach this month. 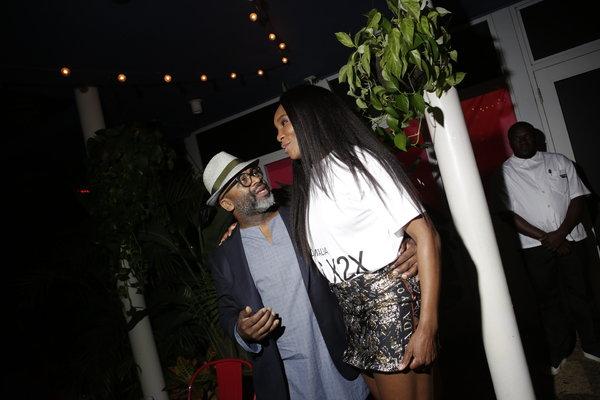 Venus Williams pays court to the artist at a celebration of his show.CreditElizabeth Lippman for The New York Times

Mr. Gates, it happens, is the style world’s current cultural idol, cast by no less an arbiter than Miuccia Prada, whom he calls a mentor, as a towering figure, “that rare artist,” she said, “who seems to fill the space between art and ordinary life.” A more sweeping version of the show is on view through mid-January at the Prada Foundation in Milan. (Prada, among Mr. Gates’s most prominent champions, has been taken to task for a recent display that included a figurine resembling a Little Black Sambo.)

Known chiefly as a so-called social practice artist, Mr. Gates, a sculptor, singer, and scholar of urban planning, has been roundly praised for his role in converting dilapidated buildings into affordable dwellings and community work spaces on the South Side of Chicago, where he lives. No surprise, then, that he is hailed as a figure of heroic dimensions, something of a savior to the area.

But Mr. Gates was having none of it. “My intention was not saving others,” he said. “I was simply making things and hoped that the will to make things would have an impact.”

His ambition, he would argue, is more circumscribed. I’m super-interested in the color black, the history of black painting,” he said. “My daddy made black paintings on roofs.”

With that he stood up, miming with an imaginary mop to demonstrate the way his father tarred a roof. “He could keep it from leaking in a way that it didn’t look tacky,” Mr. Gates said. “Aesthetics don’t have to be far from us — it’s what I’m saying.”

Another passion is digging through peoples’ things, “the more banal and the more seemingly unnecessary the better,” he said. “I feel like it’s the unnecessary stuff that, if it’s left alone long enough, could start to have its own meaning.”

His propensity to find exaltation in the ordinary extends to the subjects of the black-and-white portraits lining the walls where he sat, part of an archive of some 13,000 photographs he purchased from the Johnson Publishing Company, once the nation’s largest black-owned publishing company, producing titles including Ebony and Jet.

“These pictures demonstrate that we don’t necessarily need a superstar — the image of Muhammad Ali — to know that black people were beautiful strong and powerful in the ’50s and ’60s,” Mr. Gates said. “Add in the schoolteacher, the bus driver, the fireman” — he gestured broadly toward the photographs displayed around the room — “and that’s what to me gives all this its rightness.”

When he was a boy, similar photographs, many shown alongside advertisements for Rice-A-Roni, Winston cigarettes and Sta-Sof hair spray, helped shape his vision of black identity and, to some degree, his sense of style.

Talking fashion, Mr. Gates grew animated, bounding from his seat to point out a portrait of a radiant young woman, her hair sculptured at the crown into twin knobs, “Afro-puffs,” as they were known in the late ’60s and ’70s. “Look at that skin,” he said, his voice rising. The subject’s complexion was the product of a less polluted era, he said, “a time when people used to eat greens and sweet potatoes and when they drank — water.”

“These were everyday black women, pre-Burger King,” he said. “Any one of them, by today’s standards, could have been a queen.”

He may have a soft spot for ordinary people, but Mr. Gates has no problem exhibiting his work in a members-only setting. “Last night 500 people came to our opening, and it was a fire hazard,” he exulted. The place and the party may be exclusive, and that’s fine with Mr. Gates.

“When you give everything away, sometimes people don’t want it.” he said. “But the beauty of this kind of project is that it creates desire.”

A natural marketer and, as it happens, no stranger to fashion, Mr. Gates wore Carhartt pants, chalk white Prada lace-ups and an easy-fitting work shirt, copied from an original he bought at a thrift store and had remade in multiples by a tailor in Hong Kong.

“I have nine colors of this shirt,” he said, ebullient. “I wear it every day, it’s my uniform.” The artist sees no taint or threat of compromise in his recent and seemingly improbable alliance with the world of style. Sure, fashion is a business, he allowed. So what? He sees nothing amiss in hitching his profile to that of a high-luster brand. (He will be represented for the first time in New York by the Gagosian Gallery.)

“‘The Black Image Corporation’ is about the projection of images into the world,” he said. “What’s better than a fashion house to do that? It’s about right fit.”

FacebookshareGoogle+sharePinterestpin it
Skin Deep: How Skin-Care Companies Are Tackling Issues Faced by Women of ColorBrowsing: A Quick Way to Update Your After-Dark Look
Latest