The Rebirth of New York Fashion 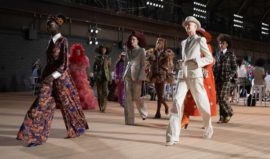 New York Fashion Week came to an end in 2001 with a Marc Jacobs show because of tragedy: The morning after his extravaganza on Pier 54, complete with disappearing walls to access the after-party and Donald Trump in the audience, the planes hit the Twin Towers and the world changed.

And New York Fashion Week came to an end this season with a Marc Jacobs show that acknowledged that moment: A paean to lost optimism and lost friends, and a bouquet of memory.

“It has been 18 years and a day we will never forget,” read the show notes left on every one of the vintage white rattan fan chairs and iron park benches and wicker garden-party seats arrayed sparingly at one end of the cavernous space, like little clouds. “This show, like that show, is a celebration of life.”

It was also about, wrote Mr. Jacobs, who dedicated the show to a friend who died in the Towers, how “we continue to learn from our past.”

Thus the doors opened at the far end of the room, and a wave of models flowed out — every one in the show — expanding to fill the space with color and movement and joy.

They swirled past the audience en masse like a kaleidoscope of butterflies, and then reappeared one by one, each a singular character of Mr. Jacobs’s imagination: a woman in a long, golden bias-cut gown; in a short explosion of petals; in a perfectly cut gray trouser suit, fedora perched jauntily on her head. A woman in newsboy stripes and a feather boa; in gangster plaid; in a knit lunch suit covered in sequins.

At the end came a long navy dress with white lace at the cuffs and high neck and inset at the back, down to the curve of the spine. It was an homage to Marina Schiano, the fashion editor and YSL muse-turned-businesswoman whose death was announced earlier this week, and one of her most famous photos: facing away from the camera, in a black Yves Saint Laurent gown with a piano-shaped lace inset at the back.

“Dream a Little Dream of Me” played on the soundtrack. It was lovely.

Although the spring/summer shows (if that is what we are still calling them) and the anniversary of the World Trade Center attack always coincide, it’s strangely rare for a designer to acknowledge that fact. That Mr. Jacobs did, and did so with such grace and beauty, is admirable.

And it also reflects an awareness that things are different now. Not just because the path of the city and the country was altered in 2001 and the world order shifted, but because suddenly the fashion order is shifting, too.

Once upon a time — once upon that nascent 21st-century time — Mr. Jacobs was the favored son of New York, its Wizard of Oz and boy wonder wrapped into one. He built the biggest sets, had the best celebrity guests and the most egregious wait times; made clothes that made everyone think, ‘Yeah! That’s who I want to be next.’

Now the sets are gone, the waiting time is normal and Mr. Jacobs has become, if not exactly an elder statesman (he’s still too unpredictable and ornery for that; leave that role to Tom Ford), then a sort of kooky, beloved uncle. And after years of constriction in which the big brands that once defined New York — Calvin Klein, Donna Karan — disappeared, and the next generation never quite reached its expected potential, despite an almost seasonal litany of “Woe is us, no one cares, New York Fashion is irrelevant,” something new and interesting has begun to emerge in the vacuum.

The gravitational forces of New York fashion are moving; its map is being rewritten and identity reinvented by a group of designers with a different sense of history and voices that demand to be heard. The conversation about race and power and gender is reshaping how we express ourselves and who understands that best.

Their allegiance is not to the old consumers by the side of the runway — the ladies who lunch, the philanthropists, the wives of Wall Street, the gallerists of Chelsea (though those consumers still exist and there are plenty of designers who dress them). It is to a new society, one exponentially more diverse by birthright, that extends far beyond the geography of Midtown/Downtown and dresses to be heard, and seen.

It is not to the old form of show, where models strode straightforwardly down a catwalk in a big white tent, the better for store buyers and editors to see product. In fact, it’s not necessarily about any product at all. It is about an idea of what a product stands for; about a creative form that connects to music and film and written words and action and layers it all together into community.

It’s Pyer Moss’s live experience at the Kings Theater in Brooklyn, and Rihanna’s Savage X Fenty blowout at the Barclays Center (also in Brooklyn); a group show by three young brands — Vaquera and friends — that couldn’t afford to do it on their own but figured out how to do it anyway.

And its expression is not streetwear or athleisure or any of the movements people kept predicting it would be, because those genres speak to the stereotype we have about what American designers are good at, which is easy-to-use sportswear.

Rather, what makes it American is not its roots in blue jean utility, but the fact it is free of the restrictions of heritage that make it so hard for European brands to change. It reflects the freedom of reinvention that the American promise was built on. It’s disruptive and messy and happy to color outside the lines. It’s not yet fully realized, but it is on its way.

It is Fashion-capital-F. And it is something to see.