The No-Nonsense Gospel of Rachel Hollis 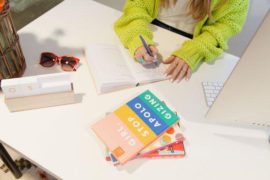 DRIPPING SPRINGS, Tex. — Before 8 a.m. each day, Rachel Hollis, the motivational speaker and best-selling author of “Girl, Wash Your Face,” works out, feeds her four children (ages 2, 6, 10 and 12) and writes in her gratitude journal. Then, it’s time for her “morning show,” a live broadcast on Instagram and Facebook for her nearly three million followers, sometimes featuring her husband, Dave.

The day only picks up speed from there. Ms. Hollis, 36, maintains a popular lifestyle website and runs a media company, which she recently moved from Los Angeles to the Greater Austin area. On any given morning, she may be taping one of her two podcasts, jetting off to a speaking engagement or headlining one of her own personal growth conferences. (Tickets are already sold out for this summer’s tour stops in Minneapolis and Dallas.)

“It’s preaching,” Ms. Hollis said recently. “In the church I grew up in, or honestly in any church I’ve gone to, the pastor always is using stories from their real life to illustrate a point to you. So that is what I do.”

The daughter of a Pentecostal preacher, Ms. Hollis has attracted her own kind of evangelical following. Her popularity exploded last year with the publication of “Girl, Wash Your Face,” a self-help manifesto that interrogates the “lies” that Ms. Hollis (and, by extension, the Everywoman) tells herself. Each chapter title focuses on a different self-deprecating put-down, including, “I’m Not Good Enough,” “I Am Defined by My Weight,” “I’m Not a Good Mom” and “I’m Bad at Sex.” Several high-profile Christian pastors have endorsed the book, as have Drew Barrymore and Reese Witherspoon.

Ms. Hollis’s advice is not cutting edge. She encourages her followers to do things they probably already know they should do — wake up early, work out and make time for their goals. But her book’s marriage of rah-rah affirmations, confessional girl talk and folksy exclamations (“Keep me near the cross, Lord Jesus!”) has endeared her to millions of women across the country. “Girl, Wash Your Face” has held a spot on the New York Times best-seller list for the last 46 weeks, and has prompted much of the excitement around her speaking engagements. (When she visited Fargo, N.D., in January, a sold-out crowd of nearly 4,000 women bested the previous record turnout for a chamber of commerce-hosted event, set when Shaquille O’Neal spoke there in 2017.) 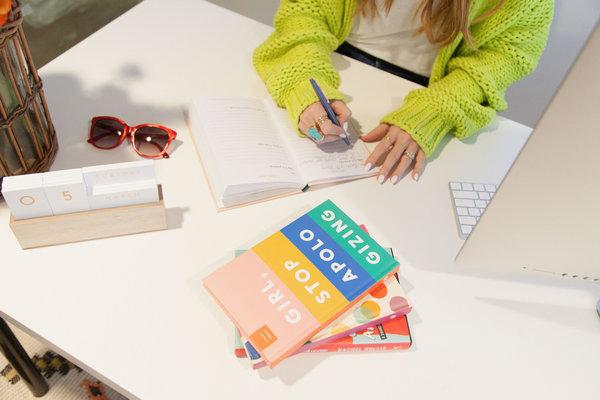 Ms. Hollis said she wrote the new book to address the guilt that women “carry for wanting something more in their lives.»CreditKatherine Squier for The New York Times

Riding on the resonance of her first advice book, Ms. Hollis published a second, “Girl, Stop Apologizing,” this month. Like “Girl, Wash Your Face,” the book contains relatable confessions and features a smiling Ms. Hollis running her fingers through her easy, beachy waves on the cover. This time around, she lays out a direct path to achieving personal goals, with sections on excuses to abandon (“I don’t have time”), behaviors to adopt (“ask for help!”) and skills to acquire (“LeadHerShip”). It begins with a meditation on the Demi Lovato song “Sorry Not Sorry” and ends with a peppy and direct, if not entirely novel, imperative: “Believe in Yourself!”

“I’m telling you something that happened with me,” Ms. Hollis said recently on a drive to her new, nearly 3,000-square-foot headquarters outside Austin, located, fittingly enough, in a former Baptist church. “I’m telling you about my own loss or my own trauma or something that I did that helped, and then trying to use that to give you some guidelines.”

And her delivery? Watch one of Ms. Hollis’s YouTube videos, or her documentary, “Made for More,” which she filmed during one of her conferences last year, and you’ll see her dancing, jumping up and down, and sometimes yelling at the audience. She attributes some of this to growing up in a Christian parish with a “dramatic and impactful” style.

She enjoys attending personal development conferences and has clearly been influenced by other motivational speakers, too. She and Mr. Hollis, a former president of worldwide distribution at Walt Disney Studios who left his position last year to help run Ms. Hollis’s now-multimillion-dollar company, paid thousands of dollars to attend Tony Robbins’s business conference last year.

Outside influences can also be found in her books. Ms. Hollis often refers to tips she learned from others and can be somewhat relaxed about crediting her sources. In both books, she relays information she saw on Oprah or “read somewhere.”

Not every message has been accepted with open arms.

While writing “Girl, Wash Your Face,” Ms. Hollis said she got pushback from her publisher, the HarperCollins Christian imprint Thomas Nelson, for including a chapter about accepting the L.G.B.T. community. “I’m a Christian, but I’m the most liberal Christian ever,” she said. “I want to love everybody. I actually think that’s what Jesus would do.” For “Girl, Stop Apologizing,” Ms. Hollis chose to work with a business-focused imprint, HarperCollins Leadership.

Ms. Hollis’s more conservative Christian followers were upset when she interviewed the former Vice President Joe Biden on his book tour. Some also react badly to, say, Instagram posts that feature alcohol. (“It was crazy, people were just like, ‘You say that you’re a Christian, and you’re drinking wine. You’re spreading a bad message, and you’re telling people to be drunks,’” she said.)

Ms. Hollis’s husband, Dave, is a regular fixture of her morning show, which draws thousands of viewers on Instagram and Facebook.CreditKatherine Squier for The New York Times

Last November, BuzzFeed ran a story about “Girl, Wash Your Face” that criticized her central message: that you are responsible for your own happiness. In her books, Ms. Hollis mostly ignores the structural disadvantages women, especially women of color, face when trying to gain financial success. Instead, she encourages readers to make their goals happen no matter what.

“One of the things the book has been attacked for is, ‘You say that anyone can kind of pull themselves up by the bootstraps and go. That’s just not true for everyone,’ and I disagree,” Ms. Hollis told me. “I just, to the marrow of my bones, I disagree because there are too many people living in opposition of that belief. I moved to L.A., left a crappy childhood, got three jobs and worked really freaking hard. And I’m not saying everybody has the same opportunities. I’m not saying everybody has the same resources. Of course, they don’t. But you, meaning the public, buying into the idea that it can’t happen for you because of what your life looks like right now, doesn’t serve you. It doesn’t serve you!”

Ms. Hollis is her own best advertisement. With just a high school education, she moved from Weedpatch, Calif., to Los Angeles to study acting and pursue her dream of breaking into the entertainment business. At 19, she landed a job as an assistant at Miramax (in the hopes of meeting Matt Damon, she said).

She met Mr. Hollis while working at the company, and in 2004 they got married. That same year, she started her own event-planning business. She was always hustling: In the span of three years, she self-published three novels (one of them based on her experience as a young, Christian event planner to the stars) and started the lifestyle blog that she still runs today.

Now, the success of “Girl, Wash Your Face” has made encouragement her full-time job. Ms. Hollis currently has 22 employees who will barely fit in the new church turned office. She and Mr. Hollis are already looking for more space outside Austin.

“Our tagline has been the same since I was a blogger: ‘Give people the tools to change their lives,’” she said. “The irony is, back in the day, what I meant by that was, ‘teach them how to make a lasagna.’ Because to me that was life changing! If I could get my kids to eat food that didn’t come from a box, I was so proud of myself. Now, it looks like personal development, because that’s what I’m really into.”

Ms. Hollis has become more open with readers about her own advantages, perhaps taking some of those earlier criticisms to heart. In that same BuzzFeed article, the author noted that Ms. Hollis did not address child care (and its enormous cost) in “Girl, Wash Your Face” outside of the acknowledgments section, where she thanked her nanny. In “Girl, Stop Apologizing,” Ms. Hollis included an entire chapter on asking for help, where she discussed employing a nanny, an assistant and a full-time housekeeper.

Ms. Hollis’s growing company just moved to a new 3,000-square-foot office outside of Austin.CreditKatherine Squier for The New York Times

At the new office, Ms. Hollis gave a tour of the space, pointing out her glass-walled office and space for a podcast studio. She said she briefly considered making the old parsonage out front a Hollis-themed store. For now, she plans to make use of the outside of the building. “I want to put some kind of mural here,” she said of one of the walls facing the street, “so that fans could come and have an Instagram moment.”

On the morning I visited their home, the Hollises regaled their Instagram viewers with a tale of their son’s ailing beta fish and broke out into a joking, warbling rendition of the ’90s worship song “Cast Your Cares.”

They sat in front of a wall of color-coded books including Michelle Obama’s “Becoming” and Tony Robbins’s “Money: Master the Game.” (Ms. Hollis often refers to herself as “Tony Robbins for women.”) Wearing a cozy black knit sweater and her signature beachy waves, Ms. Hollis sipped a green smoothie, while Mr. Hollis, in a blue button-down and black-rimmed glasses, drank coffee from a Yeti mug printed with the word “mogul.” (She has the same word tattooed on her wrist.) Thousands of her followers tuned in to watch the chatty back-and-forth. Think Chip and Joanna Gaines of “Fixer Upper” fame — except instead of fixing houses, they are trying to fix people.

After the broadcast was over, Ms. Hollis explained the genesis of the new book. “I got tired of women being like, ‘Oh, I’m sorry. I’m sorry. Excuse me. I’m sorry.’ You know, that thing?” she said. With “Girl, Stop Apologizing,” she aims to address the guilt that women “carry for wanting something more in their lives.”

“This book is about shame, because I just saw it everywhere I went,” Ms. Hollis said. The women she encountered on her book tour and at her conferences would say things like, “‘How do I do it?’ ‘My husband doesn’t like me working.’ ‘My mother-in-law thinks I should do this.’” She paused. “Man, we gotta be able to claim our own piece of earth here!”

She said she uses the chatty morning show and her aesthetically pleasing Instagram posts to draw her followers in. “You can change women’s lives, but first you have to have their attention,” Ms. Hollis said.

“My audience, they are not people who would ever describe themselves as into personal development, at all,” she said. “They are moms. They’re people who maybe started following on Instagram or Facebook, and never really thought about this stuff. So I think it’s important to make sure they’re still getting what they came for, but, hey, let’s also have this conversation about postpartum depression. Let’s have this conversation about you standing up for yourself in your relationship.”

FacebookshareGoogle+sharePinterestpin it
The Anxiety of Having a Famous Follower on TwitterFor Larger Customers, Eating Out Is Still a Daunting Experience
Latest