The Measles Emergency: What Are Religious Exemptions? 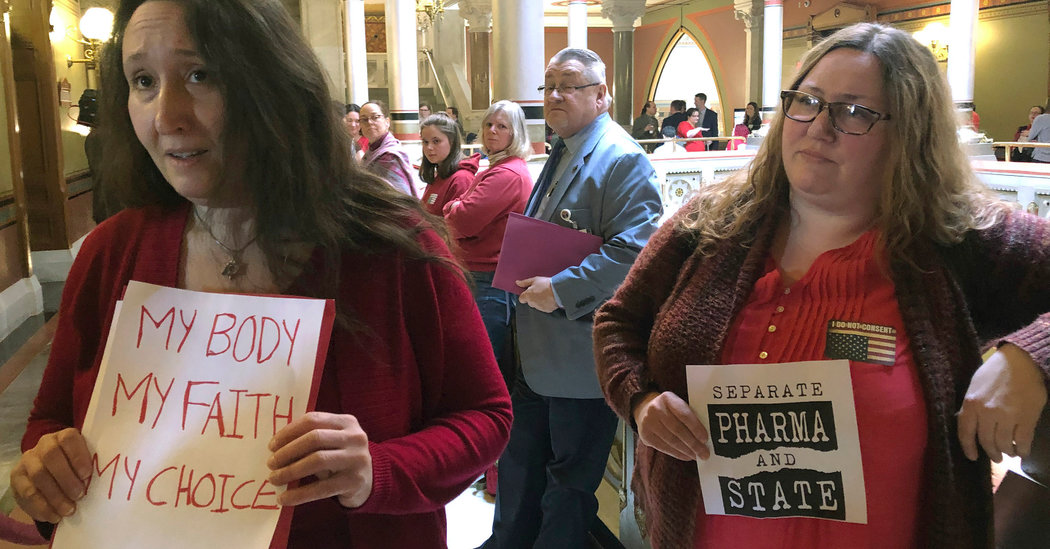 Measles cases have spread across the country this year, with the state of New York now facing its worst outbreak in decades.

Since last fall, more than 150 measles cases have been recorded in Rockland County, a New York suburb home to a large ultra-Orthodox Jewish community where there has been some resistance to vaccinations.

The vast majority of states allow families to opt out of getting vaccinated if they object on religious grounds. Parents seem to take advantage of these rules: Researchers have found that broad philosophical and religious exemptions to vaccine requirements are associated with higher rates of unvaccinated children.

But this year’s outbreaks are now raising public health questions about why states allow such exemptions. Here is how religious exemptions work:

What is a religious exemption to a vaccine, and which states have them?

Religious exemptions allow parents to opt their children out of mandated vaccination policies if they object to the vaccine for religious reasons, and if they follow the state’s opt-out process. Almost every state, plus Washington, D.C., allows for a religious exemption beginning at least in kindergarten. Four states do not: California, West Virginia, Mississippi and Arizona.

Each state has its own rules regarding vaccinations for children who attend public schools. In addition to the religious exemption, all 50 states, plus Washington, D.C., allow exceptions for medical reasons. Examples include a child who has a condition like cancer or an immune disorder where a vaccine could be harmful to the child’s health.

And more than a dozen states offer philosophical exemptions, sometimes known as personal-belief exemptions, which don’t require that a parent’s desire to opt out be specifically about their religious beliefs. Instead, they can include exemptions for conscience or moral ideology.

California, West Virginia and Mississippi, which do not allow religious exemptions, also do not allow philosophical objections.

[Here’s what you need to know about the disease and the risk of getting it.]

How are religious exemptions connected to the recent measles outbreak?

The measles outbreak in the New York suburb of Rockland County has largely been centered in an ultra-Orthodox Jewish community, where there has been some recent resistance to vaccinations. Vaccination rates tend to be low among the ultra-Orthodox, and the reasons vary, from fear of interference from outsiders to confusion over accurate religious and medical information.

The current flare-up in New York and New Jersey, both of which allow religious exemptions, can be traced back to the measles outbreaks in Israel last year. Because ultra-Orthodox parents often send their children to their own religious schools, the outbreak was initially largely contained. But it has recently spread significantly.

Some Orthodox Jewish schools have been allowing unvaccinated children to attend school, against the New York Health Department’s mandate, during the measles outbreak.

How are vaccines a religious issue for some people?

Some people worry that vaccinating interrupts a divine plan for someone’s life, and they don’t want to interfere in God’s will.

Others have concerns that some vaccines could violate religious dietary laws, unless they are designated kosher or halal. Last year an influential Islamic group in Indonesia issued a controversial fatwa, which was later overturned, against the measles-mumps-rubella, or MMR, vaccine, citing its use of porcine gelatine.

And many of those who oppose abortion object to certain vaccines, like those designed to prevent chickenpox or hepatitis A. Those vaccines are made by growing viruses in fetal embryo fibroblast cells, or cell lines that are grown in laboratories but are derived from two elective abortions in the 1960s. A Catholic family in Kentucky, for example, has filed a lawsuit against the Northern Kentucky Health Department for banning unvaccinated students from school and athletics during a chickenpox outbreak at their son’s Catholic school.

Are the recent measles outbreaks causing some states to reconsider exemptions?

To an extent, yes. Vaccine exemptions for children enrolled in kindergarten have slowly grown over the past decade, according to the Centers for Disease Control and Prevention, prompting some states to consider changes. California got rid of its nonmedical exemptions in 2015. A few states that allow religious exemptions have made them more difficult to get, requiring things like a signed affidavit from areligious leader instead of simply filling out an online form.

State lawmakers — often Republicans — around the country introduced more than 150 bills from 2011 through 2017 that would have made it easier to obtain exemptions from vaccine policies. But according to a study in the American Journal of Public Health published in January, 12 of the 13 bills signed into law actually limited the ability to exempt.

Some professional organizations have also taken action. The American Association of Pediatrics has made the elimination of nonmedical vaccination exemptions its top priority this year, even ranking it above family separations at the border.

Are religious leaders doing anything to address the issue?

Yes. Rabbis and doctors organized a public health campaign to stress the importance of vaccines. The Orthodox Union and the Rabbinal Council of America have strongly urged parents to vaccinate their children.

“It is well known that those facing even a potential life or death situation are instructed to set aside the Sabbath and other key tenets of halachic (Jewish law) observance until the emergency has passed,” they said in a statement in November.

Elsewhere, local health and community leaders have stressed open communication between health officials and religious leaders to bridge cultural divides. In Colorado, Dr. Joshua Williams, an assistant professor of pediatrics at the University of Colorado Denver School of Medicine, has recommended that the groups talk at specific times, such as when the academic year begins or at the start of influenza season, and not just during a health crisis. He is also working with the state’s Council of Churches to hold sessions with parishioners to hear their concerns.

“Religious vaccinations exemptions impact public health,” Dr. Williams said. “There is a need to dialogue with religious leaders around vaccine exemptions at local and national levels.”