The Many Faces of Gandhi 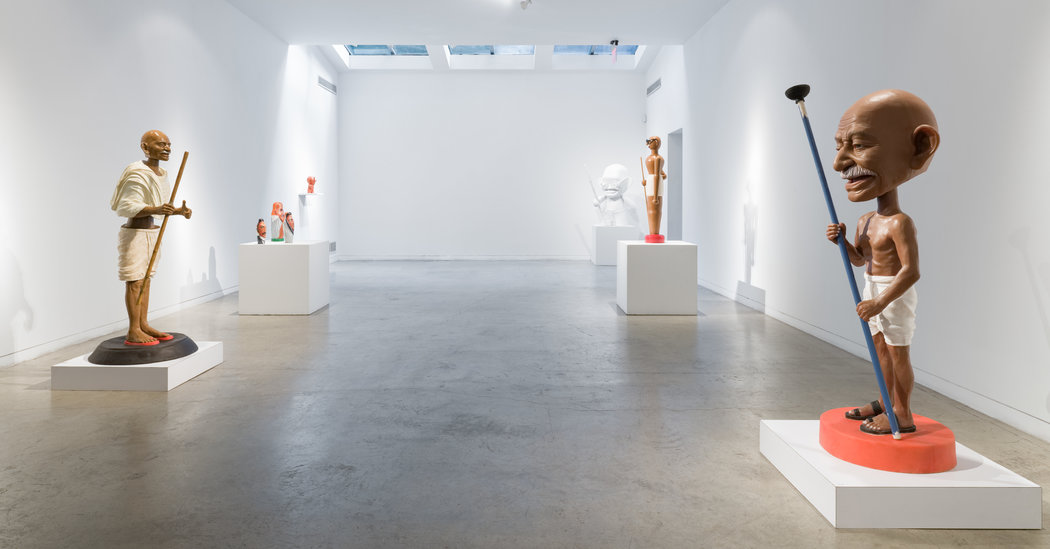 In October 1939, about a decade before he was assassinated, Mohandas K. Gandhi issued a warning to his admirers. “Some would like to erect my statue in public places, some others would have my portraits, yet others would proclaim my birthday as a public holiday,” he wrote in response to praises he had received on his birthday. “These are days of dissension and discord, I should feel deeply humiliated if my name became in any way an occasion for accentuating them. Avoidance of such opportunities is a real service to the country and to me.”

Yet of the many things that India’s independence leader achieved, curbing the proliferation of his likeness wasn’t one of them. His bespectacled face and slight frame have become synonymous with peaceful resistance and civil rights movements around the world.

Somehow he has also become an ambassador for Apple and, more recently, a poster boy for the political party that is directly connected to the Hindu nationalist who fatally shot him in 1948. He graces T-shirts and mugs and refrigerator magnets. He was on “The Simpsons.” His image has been both glorified and trivialized, meme-ified, simplified and stretched so far that the man — his flaws, complexities, and actual message — has been reduced to a cliché, a fictional superhero.

“A hyper-icon has been created,” said Sumathi Ramaswamy, a history professor at Duke University who has researched Gandhi’s role in India’s visual culture. “He has come to be appropriated even by forces completely antithetical to his message.”

Starting in the 1990s, Indian artists were using Gandhi’s image as it began taking on yet another role — a political and social vessel. “In Gandhi’s own lifetime, when artists painted Gandhi, he was the end of their work, he was the object of their work,” Ms. Ramaswamy said. Now artists use his likeness as a means to comment on the state of modern-day India, particularly the rise of right-wing politics in the country.

Two new shows at Aicon Contemporary in the East Village not only coincide with Gandhi’s 150th birthday this month, but also provide insights into how Indian artists are trying to poke fun at his ubiquity and reflect upon the country of his birth.

Here are five works that comment on Gandhi’s visual legacy in India.

Debanjan Roy’s “Toy Gandhi 4 (Superhero)” is perhaps the show’s most radical sculpture. In contrast to the image of a skinny man who often wore his signature loincloth and humble sandals, this muscular Gandhi is clad in a superhero costume. The bright red boots are particularly interesting, noted Projjal Dutta, the show’s curator. Hindu gods and goddesses are almost always barefoot in sculptures and paintings, he explained, except for Surya, the sun god who wears “Western-like boots.”

Almost 200 padukas (ancient footwear often made of wood), all seemingly headed somewhere, is a precursor to GR Iranna’s much larger piece, called “Naavu,” from this year’s Venice Biennale. “Iranna has chosen to use footwear as a metaphor for society,” Mr. Dutta said, referring to sandals worn by the rich and poor alike. One of Gandhi’s most famous and powerful acts of protest against British rule, for example, was the Salt March in 1930 when he walked over 240 miles with thousands of people to protest oppressive taxes on salt. “I think Iranna is saying India is at its best when it’s together, when everybody is in unison.”

The independence leader was famously reluctant to embrace technology, which for him represented “all that is harmful and oppressive in modern civilization,” Professor Ramaswamy said. By portraying Gandhi wearing a headset with microphone, Mr. Roy is perhaps trying to point out that “his afterlife has been turned against him for our own purposes,” Professor Ramaswamy suggested.

Almost every city, town and village in India has a statue or a bust of the Gandhi. These nine photographs, taken by Vivek Vilasini, were taken of Gandhi statues in or near small towns and villages in India — though none of them look like the independence leader. The only consistency is the mustache and the bald head. “Gandhi for all the people who made these [statues] was long dead so it’s like transferred wisdom, handed down,” Mr. Dutta said. “So how has Gandhi survived? Not entirely accurately, not entirely faithfully but perhaps still with a modicum of respect.” That the works reveal signs of wear — chipped paint or bird poop or garlands of dead, withered flowers — is also telling, Professor Ramaswamy said. “You erect a statue and you think you’ve paid homage to the father of the nation but they stand completely abandoned,” she said.

Turning Gandhi into a jiggling, giggling bobblehead is a cheeky take on the appropriation of his image. But this particular sculpture of Gandhi holding a toilet plunger is poignant, Mr. Dutta said. India’s prime minister, Narendra Modi, and his right-wing Hindu nationalist Bharatiya Janata Party fall far to the right of much of Gandhi’s own message and philosophy. Yet, this same political party used the image of Gandhi — specifically his recognizable glasses — as the logo of its Clean India Mission that focused on building toilets for the poor.

Memories of the Mahatma