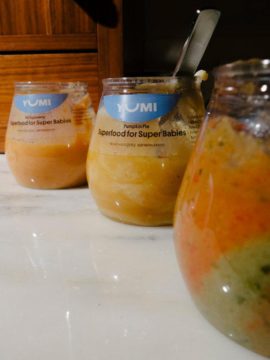 Last week in a sprawling apartment overlooking the Hudson River in New York, about 10 women sat at a dining room table eating avocado toast and tasting baby food. With children on laps, latched to breasts or in utero, they had come together to discuss parenting and nutrition.

The babies babbled. The adults bantered. (“Everyone I know imports their formula from Europe.” “I know a lot of adults who swear by charcoal in juice, but I wouldn’t recommend it for kids.”) Everyone nibbled.

“When you raise your kids, you want them to be like you but a better you,” said Angela Sutherland, a mother of two, ages 4 and 2. She wants her children to value what she does about family, community and the environment. “I want them to have the same taste buds too,” she said. 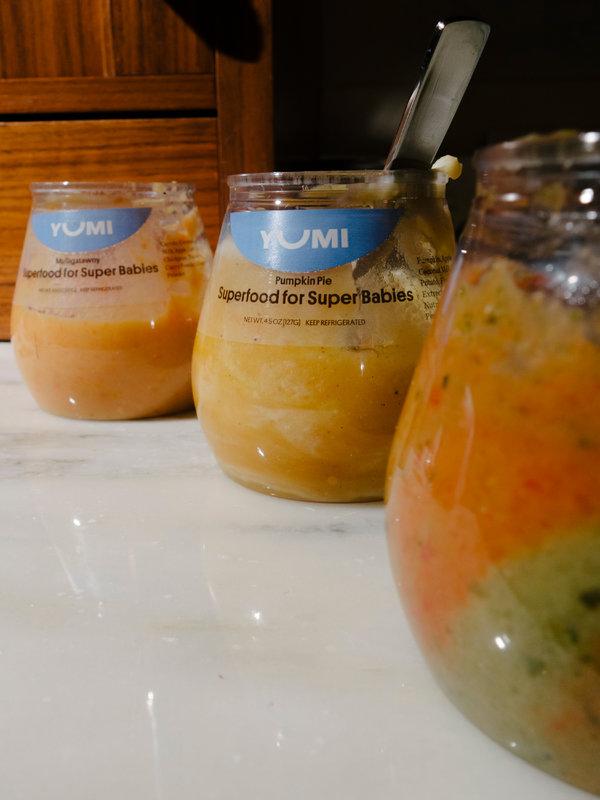 Ms. Sutherland, 35, and Evelyn Rusli, 34, a former reporter for The New York Times, are the founders of a new line of baby food, Yumi (“From Farm to Highchair”). It is high on nutrients and spices, low on fructose and free of gluten. Ms. Rusli and Ms. Sutherland have created a business based on the research of doctors and nutritionists who stress the importance of what children eat in their first 1,000 days.

Yumi purées are sent in weekly installments in 4.5-ounce jars filled with buckwheat-infused kabocha squash and quinoa-fortified kale and pears; they cost about $5 each. Started last year in Los Angeles, the company has become a darling of parents who take organic food and Instagram posts seriously.

Yumi is now available to New York babies. To celebrate its new market, it hosted this breakfast at the home of Marissa Vosper, who has a 22-month-old son.

Luke Marano, 19 months, is one of Yumi’s new East Coast eaters. His mother, Mari Agory, a model and entrepreneur, wasn’t sure he would like it when she began to receive the jars gratis as part of a promotion.

“Luke has always been a foodie and has never really liked purée,” Ms. Agory said. “From the age of 4 months, we would give him the skin of smoked whitefish with the fat on it and he would just demolish it.”

She has started him on Yumi, and the baby has taken to it. “He’s completely obsessed with the bell pepper,” said Ms. Agory, looking glamorous despite having given birth to a second son eight weeks ago.

Nash Neidich, 1, has been eating Yumi for more than a quarter of his life. Five months ago his mother, Alessandra Brawn, began having the baby food delivered to her in hotels in Los Angeles, a city she visits frequently.

“I was very nervous he wouldn’t like it,” Ms. Brawn said. “There are very expansive flavors like cumin and chia seeds, things that are complicated for an adult palate, let alone an infant’s.”

Strewn on the table were jars of Yumi products such as mulligatawny, made from carrots, coconut milk, apple, lentils, chickpeas, turmeric and curry powder. Ms. Brawn sat at the table feeding her son a berry mash and tiny forkfuls of avocado, but then Nash had to dash early for music class.

Yumi is one of several companies trying to cultivate a new generation of foodies.

Eat2explore is another. It was created by Rowena Scherer, 50, who had an aha moment after taking a family cooking class while traveling in Thailand.

“I realized my kids couldn’t even dice or chop vegetables, and I knew it was because I do everything for them,” said Ms. Scherer, who used to work in finance. She suspected that if her children were more involved in the preparation of different dishes, they would be more likely to try them as well.

As a child in Malaysia, Ms. Scherer said, she and her family would cook lunch together each Sunday, letting her also practice what she learned in home economics class. “Because I had a familiarity in the kitchen and good knife skills, I had a lot of independence as a teenager. Cooking is a life skill, and we are not longer preparing our own kids in this way.”

Her company sells country-themed boxes (Brazil, Ethiopia, Lebanon). They cost about $20 to $25 and include nonperishable sauces and spices, three recipes that are local to the country, as well as maps and cards that explain why certain flavors and dishes are important to the particular culture.

The meals are meant to be cooked by children with help from a parent. “If you make something with your own hands, you are much more likely to try it and over time you will develop your palate,” Ms. Scherer said.

In Brooklyn, two longtime food writers and editors who have long preached the importance of passing cooking skills to children are now putting their money where their mouths are.

“It was ironic that food has never been as trendy as it is today and yet families are cooking less and less at home with their kids,” said Dana Bowen, 46, the former executive editor of Saveur and Food and Wine magazines.

Last summer, she and Sara Kate Gillingham, 43, a James Beard Award-winning writer, opened the Dynamite Shop. During weeklong summer sessions, children learned knife skills and about the cultural significance of foods in the kitchen before producing a pop-up restaurant experience for their parents. This fall, students have signed up for weekly after-school sessions that culminate in them bringing home dinner for their families after each class.

Wilson Rumble, 12, started taking classes at the Dynamite Shop early this fall and now knows how to whip up guacamole — and that vegetables “can be cooked with certain ingredients to make them taste less like vegetables,” he said.

Kristin Earhart, Wilson’s mother, has a 15-month-old daughter as well. Between work and taking care of the baby, Ms. Earhart has struggled to get dinner ready by the time Wilson gets hungry. She heard about the Dynamite Shop and was surprised by her son’s enthusiasm. “I was excited,” Wilson said. “I wanted to cook fine meals.”

He had always hated butter, but at the Dynamite Shop he was encouraged to make compound butter by adding spices to it that he likes. Then he slathered it all over a sweet potato that he baked and gobbled the whole thing.

At home, he has been helping his mother in the kitchen. “It makes things go much smoother when you have a sous chef,” Ms. Earhart said. “And one day, probably not too long from now, I’ll be his.”

FacebookshareGoogle+sharePinterestpin it
‘Clueless’ Was Amy Heckerling’s Masterpiece. Is She Done With It? As If.Marc Jacobs Is Launching a New, Affordable Label Called «The Marc Jacobs»
Latest