The City That Cycles With the Young, the Old, the Busy and the Dead 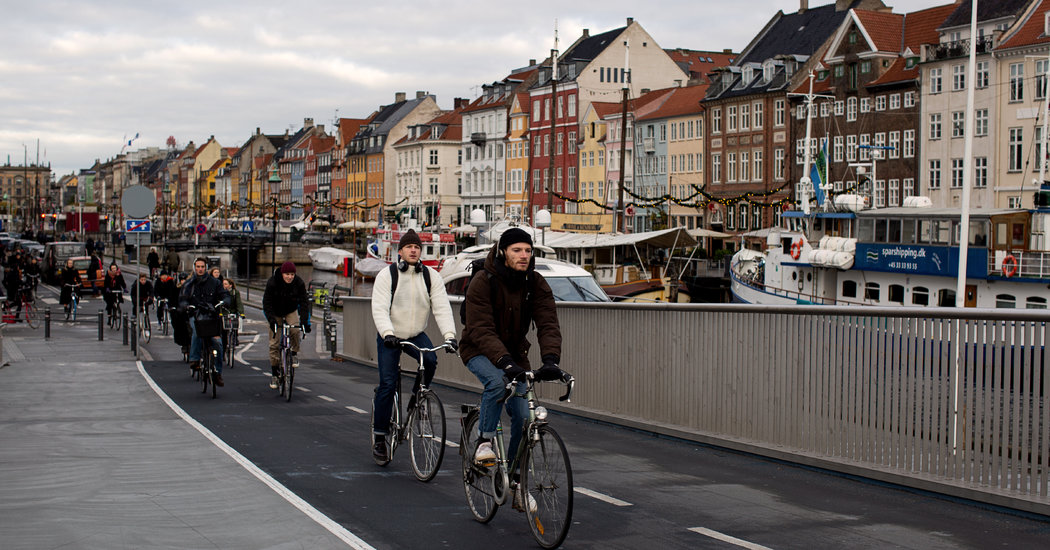 COPENHAGEN — By the standards operative on most of planet Earth, this is not an especially wonderful day for a bicycle ride. The temperature reads 42 degrees Fahrenheit, and a vengeful breeze forces damp chill to the bone. Sullen gray clouds occupy the sky, dispensing an apathetic drizzle.

Natalie Gulsrud scoffs at these details. It is nearing 4 p.m., darkness already bringing finality to this bleak November afternoon. She has to go to the child care center to pick up her 5-year-old son — “5 and a half,” he quickly corrects, later. She has to stop for groceries, and then head home for dinner.

Like tens of thousands of other people in Denmark’s elegant yet frequently dank capital, she pedals her way through her daily rounds, relying on the world’s most advanced and widely used network of bicycle lanes. She does not own a car. She does not want a car.

She settles her bag into the front compartment of her cargo bike — a three-wheeled contraption built for hauling children and groceries that is something like the S.U.V. of local family transportation. She climbs aboard the saddle, gathers her overcoat around her, and leans into the uncompromising wind.

On the other side of the Atlantic, New York has just proclaimed intentions to spend $1.7 billion to dramatically expand the city’s now-convoluted and treacherous patchwork of bicycle lanes. Local leaders speak of dismantling car culture and replacing it with a wholesome dependence on human-powered vehicles. The mission is draped in high-minded goals — addressing climate change, unclogging traffic and promoting exercise.

Copenhagen’s legendary bicycle setup has been propelled by all of these aspirations, but the critical element is the simplest: People here eagerly use their bicycles — in any weather, carrying the young, the infirm, the elderly and the dead — because it is typically the easiest way to get around.

“It’s A to B-ism,” said Mikael Colville-Andersen, a raffish bicycle evangelist who preaches the gospel of Copenhagen to other cities. “It’s the fastest way from point to point.”

The bicycle is liberation from municipal buses and their frequent stops. The bicycle spares people from having to worry about where to park cars. The bicycle puts people in control of when they leave and when they arrive.

“Some people ride their bikes to the hospital to give birth,” said Ms. Gulsrud, who is herself pregnant with her second child. “I’m not going to do that.”

A former neighbor operates a bicycle mortuary service, pedaling the departed to their final destinations in caskets. Mail carriers use bicycles to deliver parcels. People use bicycles to get to the airport, sometimes pushing wheeled suitcases alongside them while they roll.

Some 49 percent of all journeys to school and work now transpire by bicycle, according to the city, up from 36 percent a decade ago. When the municipal government recently surveyed Copenhagen’s bikers on what inspires them to bike, 55 percent said it was more convenient than the alternatives. Only 16 percent cited environmental benefits.

“It’s not in the morning, when you’re late for work, that you want to save the planet,” said Marie Kastrup, who heads the city’s bicycle program.

On weekday mornings, some 42,000 people traverse the Queen Louise’s bridge in central Copenhagen, bringing residents from fashionable neighborhoods in the north into the city’s medieval center.

On a recent soggy Monday, a woman in high heels and a trench coat pedaled a cargo bike decked out like a city taxi, her three toddlers in the front compartment. A plumber traversed the traffic in a cargo bike, his tools stashed in the compartment. Bicycles vastly outnumber cars.

Most of the bicycles were old-school upright varieties distinguished by their utility and lack of appeal to thieves, whose ubiquity is a gnawing source of worry among the pedaling class.

But on the opposite side of the thoroughfare, in a shopfront done up like a Parisian boutique, a retailer, Larry vs. Harry, displayed its sleek, shiny two-wheeled cargo bike, The Bullitt, which sells for as much as 43,450 Danish kroner, about $6,500. Three models are parked in the front window, green, yellow and red, glinting like Ferraris.

Nearby at Nihola, a cargo bike brand that is more like the Toyota of the pedaling scene, a showroom displays compartments big enough to fit four children. One can carry a wheelchair. Front doors swing open, allowing toddlers and dogs to climb in.

Copenhagen’s status as a global exemplar of bicycle culture owes to the accommodating flatness of the terrain and the lack of a Danish auto industry, which might have hijacked the policy levers. Trouble also played a role.

The global oil shock of the 1970s lifted the price of gasoline, making driving exorbitantly costly. A dismal economy in the 1980s brought the city to the brink of bankruptcy, depriving it of finance to build roads, and making bicycle lanes an appealingly thrifty alternative.

The city focused on making biking safe and comfortable, setting lanes apart from cars on every street. As biking captured mass interest, improving the infrastructure became good politics. When it snows in Copenhagen, bike lanes are typically plowed first.

This was the situation that drew Ms. Gulsrud to Copenhagen from her native United States.

Raised in the Pacific Northwest, she was pursuing graduate studies in public policy and working to promote bicycle commuting in Seattle when she opted for a semester in Copenhagen in 2009. She fell hard for the city, transferred her studies here, and now teaches natural resources management at the University of Copenhagen.

She and her husband, Kasper Rasmussen, his 9-year-old daughter, Pixie, and their son Pascal, live in a sixth-story walk-up apartment in Vesterbro, a former warren of leatherworks shops that has rapidly gentrified, yielding peculiar contrasts. Prostitutes trawl for customers at night, walking past shops that sell Tibetan mandala paintings, organic produce and essential oils.

“The other day, I heard people talking about whether their dogs were vegan,” Ms. Gulsrud said.

She picked up Pascal in the handsome yet fading villa that is his child care center. He balked at putting on his coat despite the chill. She strapped him into a harness inside her compartment as he pulled on his helmet. She zipped shut a clear plastic cover, shielding him from the weather.

Then she rode through puddles to the grocery store, where she scanned dozens of bicycles lining the sidewalk until she found a spot big enough to accommodate hers.

Emerging from the market, she deposited her groceries — kale, milk, Greek yogurt — into the compartment in front of Pascal and rode a few blocks to her apartment. She pulled open the gate and wheeled into the courtyard.

The walls there were lined with bicycles — the cargo bike her neighbor, a medical student, uses to transport her three children, including her 6-month-old in a bassinet; her husband’s cargo bike, which includes an electric engine to help with hills; and standard bicycles used by the Pakistani immigrant family upstairs, by the Argentine-Brazilian couple and their two small children, and by her neighbor from Sweden and her wife and their two children.

Not long ago, modernity felt bound for something like the Jetsons, with families zipping around via jet packs. But maybe this is the future, a resumption of the past, upgraded by contemporary design.

“The infrastructure is there and it’s safe,” said Mr. Rasmussen, as he prepared a comforting dinner of squash soup and home-baked sourdough bread. “Why wouldn’t you bike? It’s stupid not to bike.”

FacebookshareGoogle+sharePinterestpin it
She Said Yes, but What About Her Sno-Ball?Joel Kim Booster Jokes About Grindr and Asian Stereotypes
Latest