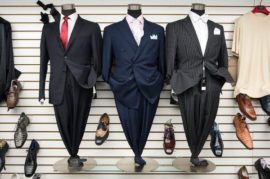 True story: A few weeks ago I was at Totokaelo, trying on a black Bode lace overshirt, attempting to rationalize the $500-or-so price tag. It didn’t help that in the fitting room next to me was a guy who, as his mother was picking clothes for him, was chatting to the sales clerk about how he knew the designer “before she was a thing.” Taxed and a little anxious, I left the shirt behind.

Surely, I could channel the look for less, I thought. A few days later I found myself on Orchard Street and wandered into Cellini Uomo, a store I’d been to a couple times, drawn in by its extensive and colorful selection of Mauri exotic-skin shoes.

It’s a holdout, one of a handful of extant older-world clothing stores on the rapidly gentrifying and regentrifying blocks of Orchard between Houston and Canal. Many are run by Orthodox Jews who’ve been in the neighborhood for decades. Sprinkled in between the sneaker boutiques, the art galleries and Max Fish 2.0, there are maybe a dozen of them still standing.

They sell shearling coats and leatherlike tracksuits and wide-body suits and loafers with what I can only presume is a chemical sparkle. Clothes with brand names — Pronto Moda, Bocci, Paolo Valenzi, Peletti — that radiate a certain Italianicity, as Barthes would have said. All prices are negotiable.

Cellini Uomo, at 133 Orchard, is one of my favorites, and in my quest for a quasi-lace top, it did not disappoint. I found a black short-sleeve linen number — the brand was called Prestige — with elaborate floral cutout designs on the front. I bought it, for around $75, and also a straightforward white linen short-sleeve shirt — with a stain that the owner promised would come out — for $40. (I conquered the stain with Le Blanc linen wash.)

If you believe that peak-era Gerald Levert was a style icon, as I do, Cellini Uomo is crucial. It offers shirt-pants sets in wild colors and spacious silhouettes, tracksuits with details stolen from Gucci and Versace, and a range of Mauri footwear — some running to several hundred dollars — that push the boundaries of color and texture. It is crowded, with shirts crammed onto racks and into piles, in sometimes inscrutable order. But its riot is soothing, like a bazaar operating in plain sight of a megamall, unbothered.

A couple of weeks later, I went back to Orchard for a full immersion, and was loitering on the corner of Grand Street when Sammy got my attention. I was across the street from his shop, Global International Mens Clothiers (62 Orchard Street), and he came over to chat me up, see if I needed a suit, or maybe I knew someone who wanted to take over his business. Inside his store, there were suits and trench coats, a fantastic sweater with a boomerang pattern by Ellis Island (not my size, alas) and an assortment of grown-folk-nightclub-appropriate sweaters in unnatural fabrics.

Sometimes that’s what is needed, though. I fell for a mock-neck turtleneck the color of cinnamon oatmeal, by Raffi, for $75, around $300 less than I imagine I’d pay at Opening Ceremony for an equivalent style this season.

Here is the secret of these stores, whose core offerings likely haven’t changed much over the years. At times, their styles line up perfectly with fashion’s jagged EKG pattern, and even when they don’t, their adjacencies offer their own pure thrills.

Like, for example, the frankly astonishing triple-toggle swoop-neck pseudo-Coogi sweater hanging in the window of Dolce & Dolce (122 and 136 Orchard Street). It is a garment and also impressionist art. Dolce has oodles of Stacy Adams — a perfectly slouchy green turtleneck with some cabling was $125 or, by the time I was leaving the store, $80.

And hundreds of shirts and sweaters with patterns you might see on the diamond district jewelers and medium-rent hoodlums in “Uncut Gems.” They’re the sort of clothes — New York outer-borough tough-but-smooth-guy uncle — that Supreme remakes for its more mature customers.

Occasionally, they are elevated, as at Jodamo (321 Grand Street), the most sophisticated on the strip, with its lengthy racks of Boss suits, its packed stacks of Eton shirts and its bonus room in the basement that features rows of print sweaters, including a couple of rogue Brionis and Luciano Barberas, and impressive all-weather jackets by Green Coast, an Italian yachting-themed company (around $900).

Gaining access to the private room is a goal I didn’t know to have initially, but in three of these stores, I was able to see what was, essentially, the storeroom. Nowhere was that more a thrill than at Cougar Italian Fashions (96 Orchard Street), a downstairs shop across the street from the Tenement Museum. On the main floor, there were shoes in wild colors — when I asked what size a blue triple-monk oxford was, Yoseph told me that in his store, “one size fits all.”

When we went downstairs, we rifled through racks of faux Al Wissam embroidered bombers ($150) and Sopranos-extras shirts with sheen. At one point, he held up a shirt, announced a savagely low price and declared, “This is a suicide, not a sale.”

How could you not buy something here? It would have taken hours to dig through everything — castoffs from a family member’s store in Connecticut that had closed, Yoseph said — but I lucked out. On a rack in the back of the basement, close to the ground, I spied a gaggle of kids’ clothing. And in that pile, one single toddler-size black leather 8-Ball jacket. I bought it, for $35, for the child I have not yet had, but who will start learning the secrets of Orchard Street early.

FacebookshareGoogle+sharePinterestpin it
Connie Nielsen Reads ‘Rallying to Keep the Game Alive’Medical News Today: What are the best foods to aid digestion?
Latest