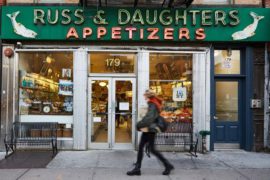 In this series for T, the author Reggie Nadelson revisits New York institutions that have defined cool for decades, from time-honored restaurants to unsung dives.

A chilly day in early December and I’m sitting on a bench outside Russ & Daughters, eating a hot latke. Made of grated potato and onions, fried until golden brown, crispy outside, fluffy within, these are eaten to celebrate Hanukkah, which began last night. Down-home types eat them with sour cream or apple sauce; better still is the Russ way, with crème fraîche and a nice spoonful of red caviar, the fat red salmon roe that you can pop with your tongue. Eight nights of Hanukkah, eight occasions to nosh a latke.

Eating the latke here, I’m thinking about my father. I’ve come to Russ because so much of my own life is invested in this little shop on the Lower East Side, where my father was born and grew up. Sitting here, I feel the weight of all this history. Almost a century ago, as a little kid, my pop was probably eyeing a plump schmaltz herring or a pickle at Joel Russ’s first shop, which opened on Orchard Street in 1914. A few years later, Russ moved here, to 179 East Houston. Maybe it’s a Jewish thing, this combination of joy and melancholy expressed through food. “Food is one of the deepest ways we have to connect to and take pride in who we are,” says Niki Russ Federman, who co-owns the store with her cousin Josh Russ Tupper. 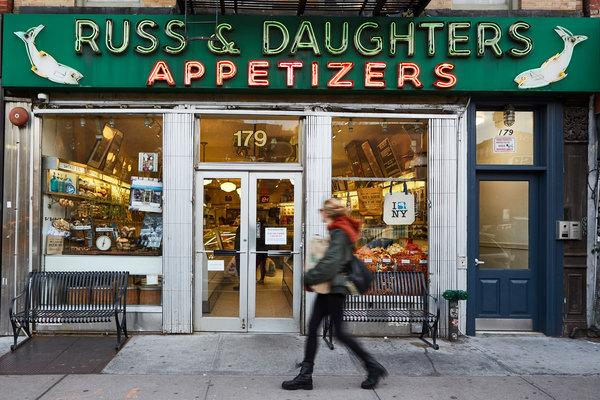 Mr. Russ had no sons, so he gave the store to his three daughters, and one of them, Anne, begot Mark and Tara, and Mark begot Niki, and Tara, Josh. Niki and Josh opened the Russ & Daughters Cafe on Orchard Street in 2014 and, two years later, another one at the Jewish Museum uptown. They’re the fourth generation, and counting.

On the front of the shop is the pink-and-green neon sign with two little lox next to the lettering. Outside, a line has formed. A new generation has discovered the shop, and if you are a real Russ-nik, you wait. After all, inside is Paradise.

To your left as you enter is a counter that runs the length of the store. Here is the shining pink lox, that fatty, salty, cured-belly lox that, with cream cheese on a bagel, has given its name to the greatest sandwich ever produced by humankind — this is a fine thing anywhere, but at Russ, it is the ne plus ultra. And then down the counter is the more expensive, less salty, la-di-da Nova. Other smoked salmons are arrayed in one of the glass cases, like a United Nations of salmon: salmons from Norway, Scotland, Ireland. There’s smoked sturgeon that will produce creamy translucent slices and sable (smoked cod) and those little golden-skinned chub, baby-size white fish, not to mention caviars and roes, vats of cream cheese, scallion and the herrings in cream sauce, in wine sauce, chopped herring salad, fresh herrings from Holland, when they come, or French herring, if you’re fancy. Latkes are now available all year round; so is the gefilte fish and matzo ball soup, once sold only for Passover.

On the wall at the back are family photographs, evocative black-and-white pictures from across the 20th century of Mr. Russ, the three daughters and their children. So much history; so much time passing.

Half a dozen slicers and servers are working; white coats on, they look up to answer questions and take orders, and if they recognize a regular, there’s an exchange about kids and family. Chhapte Sherpa, an assistant manager, jokes that his New York name is Sherpa Lox. This is a guy who guided people to Everest Base Camp once upon a time and in the aftermath of Superstorm Sandy ran up twelve flights to deliver food to people who were stranded.

“Shall I make you your sandwich?” calls out Herman Vargas, one of the managers. Herman has been with Russ for more than thirty years, since he arrived from the Dominican Republic.

A golden-brown latke from Russ & Daughters, topped with crème fraîche and a slice of satiny-pink Nova.CreditPaul Quitoriano Behind the store’s counter are blue caviar tins, a row of cinnamon and chocolate babka, stacks of bagels and bialys and shopping bags that feature the original design.CreditPaul Quitoriano

He makes me my bespoke sandwich, a lightly buttered toasted bialy with smoked sturgeon and smoked salmon. Vargas learned English at Russ, but also plenty of Yiddish so he could chat with the older customers. The best part of Russ — well, not quite as good as the reserve smoked sturgeon — has always been the socializing. You go in before a holiday, any holiday, and the place is packed with people and their parents and their kids, maybe kids who are now grandparents themselves. You wait for your order; you kibitz relentlessly. Mark Federman, Niki’s father who quit his law practice to take up with the lox racket and ran the place with his wife, Maria, for years, was a Grade-A schmoozer, and a lovely guy; he still is. Niki and Josh are coming along nicely in the art.

Johanna Shipman, the other manager, prefers the Norwegian smoked salmon. Her favorite way to eat Russ food is “with friends or family at home,” she says.

Opposite the fish counter, near the front of the store, are the piles of dried fruits like jewelry — apricots, pineapple, dates, pears, papaya. Glass jars contain chocolate-covered jellies and three kinds of halvah and doughnuts for Hanukkah. Also: the rugelach, the salty caramel macaroons, the black-and-white cookies. All of it now baked at the new Russ facility in the Brooklyn Navy Yard, a place so big and white, clean and fragrant, Joel Russ would surely have imagined heaven this way. Soon, a retail shop will open there.

Herman Vargas, one of the shop’s managers, has been at Russ & Daughters for over 30 years and is known as “Herman the artistic slicer” for his fine slicing of smoked salmon.CreditPaul Quitoriano

“One for the road,” says Josh, holding up a golden bagel.

The Russ bagel, also baked at the Navy Yard, is possibly the best in town. This is a great bagel, a Nobel Prize bagel, the gold ring of life, glistening and crusty, hard but chewy, a bagel that’s like reading Philip Roth.

In “Operation Shylock,” Roth recalls the aromas of the Newark shop where, in the 1940s, his family shopped for Sunday breakfast: “ … the bitter fragrance of vinegar, of onions, of whitefish and red herring, of everything pickled, peppered, salted, smoked, soaked, stewed, marinated, and dried, smells with a lineage that, like these stores themselves, more than likely led straight back through the shtetl to the medieval ghetto and the nutrients of those who lived frugally and could not afford to dine à la mode, the diet of sailors and common folk, for whom the flavor of the ancient preservatives was life.”

The New York Restaurant Where (Almost) Nothing Has Changed Since 1975 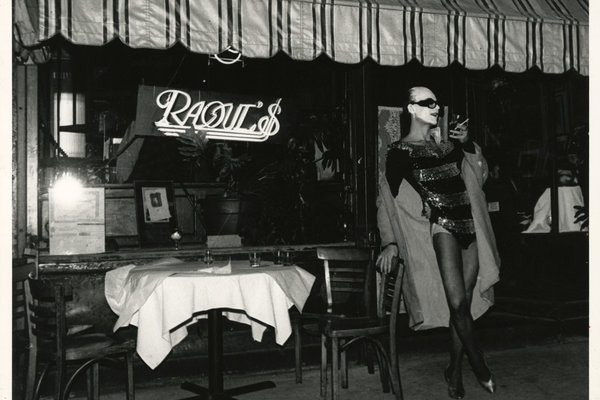 The 200-Year-Old Bar Beloved by Book Editors and Longshoremen 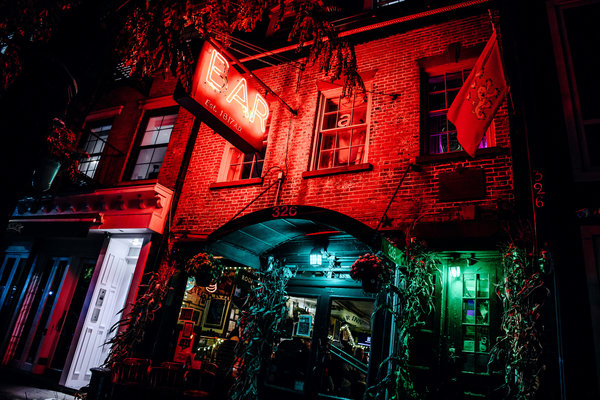 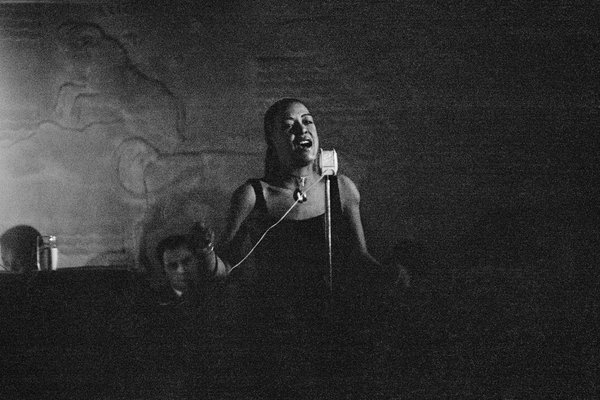 The Beloved New York Drugstore Where Local Artists Get a Discount 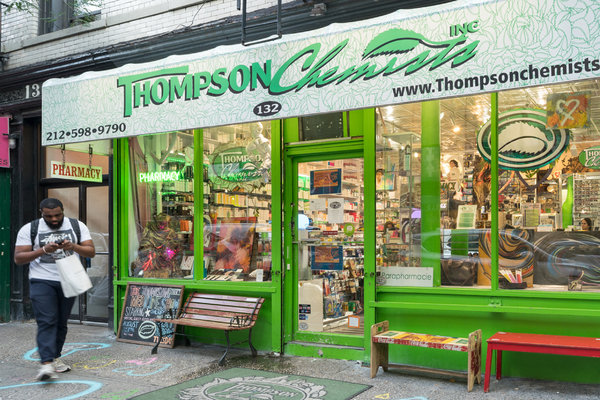 FacebookshareGoogle+sharePinterestpin it
Alchemy, Miami StyleChanel Will No Longer Use Exotic Skins In Its Future Collections
Latest