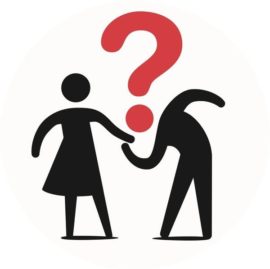 My husband and I separated last spring. It was ugly and featured lots of screaming and yelling, some of it in public places. One afternoon, at our son’s middle school, we were arguing about who was supposed to pick him up that day. My son got involved, and I grabbed him — admittedly, roughly — and pulled him away with me. Over the summer, my husband and I spoke with a counselor, and things are smoother in our separation now. But a mother at my son’s school is still telling everyone that I’m abusive to my child. I grabbed him one time! Any advice?

My mother slapped me once. (I was also in middle school.) And over the next 40 years, she apologized to me at least 100 times, including on her deathbed. I really got that my mother was sorry and that hitting is wrong. So, before we worry about strangers, apologize to your son (again?) without any excuses and ask him if he wants to talk about it. That’s the big takeaway here!

As for this other mother who is still gossiping about your very bad day, I would skip speaking to her about it. If she were concerned about your son, she would have talked to you or reported you — not conducted a publicity campaign. By explaining yourself to her, you’ll only give her fresh dirt to spread.

I do suggest telling someone at school about this situation, though. Gossiping parents can be toxic, and an administrator may help to curb that. Still, this other parent isn’t lying; you did grab your child roughly. So, save most of your energy for making sure your son knows that what you did was wrong and that his well-being is your priority.

My husband and I were married seven months ago. I know that gifts are not required, but our wedding was on the lavish side (with over 200 guests), so a gift or at least a card would be expected. My dilemma: We are invited to a good friend’s wedding in two months. They came to ours, but didn’t give a gift. If their wedding rolls around, and we still haven’t received a gift from them, should we give one? I don’t want to be petty, but I’d feel odd giving a gift for their wedding when they didn’t acknowledge ours.

So, when you say, “I don’t want to be petty,” what you mean is: “I want to hold their wedding gift hostage until I get mine.” That’s pretty much the definition of petty. But I also get it! It’s a human impulse, no need for any gloss about feeling odd.

The fact is, you’re probably not receiving a gift from this couple after seven months. So, ask yourself: Am I a person who gives wedding gifts to good friends who didn’t give one to me? Personally, I like the high road. (I feel better about myself.) But if your answer is no, that’s fine too.

And for the record: I think you misunderstand the numbers here. After accounting for close friends and relatives (mine top out at 20), most other wedding guests probably have relatively little interest in attending, no matter how lavish the rubber chicken. So, the bigger your guest list, the more likely that some gifts will fall through the cracks.

But the Rent! And the View!

My sister has a beautiful rent-stabilized apartment in New York with a park view. Her new partner wants her to give it up because she lived there with an ex. At first she refused, but he kept at it until she “gave in” (her words, not mine). It will cost her lots of money to move. I think she should save that money for the wedding they want one day. Is the partner’s request reasonable?

You certainly take an active interest in your sister’s real estate. Presumably, she knows what her lease is worth. And I am unwilling to interpret “gave in” as proof that she was bullied into her decision. Isn’t it just as likely that she has come to value her relationship more highly than cheap rent?

Personally, I don’t share her partner’s squeamishness about living in previously occupied love nests. A fresh coat of paint and some burned sage works fine for me. But this question, along with their wedding expenses, is for the couple to sort out — not you and me. Butt out (or try to get the lease transferred into your name).

What Nice Books You Have …

I support a small antiquarian book museum. A friend has an extraordinary collection of rare books. He’s mentioned casually that he would like to donate part of his collection to the museum. How do I approach him for an actual donation without seeming too bold? His friendship is important to me.

I am less concerned with your boldness than with this valued friend dodging you after you make a direct request for his books. (People like their stuff!) Why not try to get him involved with the museum and let a possible donation follow from there?