Swimming Against a Tide of Expensive Sushi 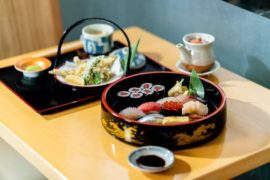 No matter how callous and unfeeling we restaurant critics may appear, none of us, as far as I know, has actually hoped for a restaurant to burn down. I may have to reconsider that, though, in light of how much good it seems to have done a sushi bar called Uogashi.

When Uogashi’s owners in Japan — a seafood distributor, according to several employees, although the management has declined to confirm it — decided the time had come to expand to the United States, they chose a location in the East Village. The space was deep, and the spare blond-wood interior featured a sushi bar along the right wall that had room for at least two dozen seats, starting near the entrance and running nearly all the way to the back of the restaurant.

The populism suggested by all those counter seats was reflected in the menu. There were nigiri platters for under $50 and an omakase for less than $100, prices you might see in a neighborhood sushi dispensary with no special pedigree. Apart from the tuna, all the seafood was imported from Japan and seemed unusually fine for the price, although the slices were often two or three sizes too large for the rice, and the individual pieces were on the bland side. My meal at the counter wasn’t quite exciting enough to lure me back for a full review, so I shuffled Uogashi off into a roundup of good values on the sushi front that I was writing.

After that, Uogashi slipped my mind until last fall, when I woke up to the news that its building had nearly been destroyed by an overnight fire. At first there was hope that fish and rice would be reunited there one day, but eventually word got around that Uogashi had closed for good.

Except that it didn’t, exactly. With much less drama than attended its demise in the East Village, Uogashi reopened in January on a block of West 51st Street characterized by vintage tenements, low-rise hotels and restaurants catering to the theater-district crowd.

The new edition does not appear, at first glance, to be an upgrade. The restroom, a short walk from the dining room in the lobby of an adjoining hotel, has a neglected, unloved feeling. The dining room is boxy, and the tables, which in the first location were partly secluded with rice-paper chandeliers behind hanging curtains, seem to have been wedged in wherever they would fit. The sushi counter has shrunk to nine seats, but still has to accommodate three busy chefs, just as the older, longer one did. The walls are decorated with oversize black-and-white illustrations of fish. The whole place looks as if it could be in the food court of an ambitious supermarket.

It’s much better than that.

Akamutsu, known in English as rosy sea bass, is on the sushi menu now. If you get it, and why wouldn’t you, it will be seasoned with a squeeze of sudachi juice and a few flakes of kombu salt, a firm contrast to the lush, pink-tinted flesh, whose oils have been made soft and creamy by a hot swipe with a chef’s torch.

Kohada has been available lately, too — gizzard shad, a silver-skinned fish so small that it can take two or three to make one piece of nigiri. At Uogashi it has been briefly salted and vinegared, and has an effect that is something like eating a bite of pickled herring and chasing it with a gulp of very dry, very cold Champagne.

Engawa is a fluke’s dense and chewy outer perimeter, the muscular edge that sends the rest of the fish fluttering along the ocean floor. A little of that would be good to try, too. Short strips so firm they almost crunch will be piled over rice, seasoned with a dab of the spicy daikon paste called momiji oroshi, and finished with a tiny shard or two of sea urchin. The sushi chefs have had several varieties of urchin lately; you might want try the smaller, sienna-colored lobes of bafun uni from Hokkaido to compare them with the less-intense and creamier Murasaki uni from Maine.

The prices are almost as forgiving as they were downtown. Most of the nigiri are either $6 or $8; more prized items such as chu-toro and shiro ebi, the tiny white shrimp that have to be pressed together by the dozen to make a single piece, are $10 each, and a small handful of rare treats like Japanese abalone and sea urchin are $12. A platter of eight pieces of nigiri and a maki roll, chef’s choice, is $45, and comes with miso soup and a hot bowl of chawan mushi, savory and smooth.

One night when I was sitting at the counter, I watched as two chefs assembled several of those $45 platters while simultaneously handing pieces of sushi across the counter to omakase customers paying $95 and up. The fish, the seasoning, the rice and the hands that put them all together were the same.

Their names were Fumitaka Takeshita and Masao Matsumoto, and between them they have been putting fish on top of rice for six decades. For one of those decades, they worked side by side at one of the Sushiden locations in Midtown. Both Sushidens closed last winter, leaving those discerning customers who had appreciated their quiet, serious handiwork bereft. I doubt that more than a few of them have had the means to follow Nozomu Abe, the restaurant’s most famous chef, uptown to Sushi Noz, where the fish is stored in insulated cabinets cooled by ice blocks, and a tasting menu costs $175 or $325.

Noz is one of many cosseting, forbiddingly priced sushi parlors that have opened in the wake of Sushi Nakazawa, from Sushi Ginza Onodera to Sushi Amane to Noda to Uchu by Ichimura; each new one makes Nakazawa’s $150 omakase look more and more like the recession special at Gray’s Papaya. New York may be losing Tad’s Steaks and single-screen movie theaters, but at least it has lots of places where you can spend more than $300 on sushi.

The low end is even more crowded, with unprepossessing neighborhood places sending out California rolls by the carton. What is harder to find, among sushi bars and many other types of restaurants, is the middle ground. That, though, is where you’ll find Uogashi. All the omakases, including the entry-level $95 meal, start with an appetizer; lately it has been tsubugai, a whole whelk broiled and brushed with soy before being tucked back into its shell. The more you pay, the more varied and luxurious the courses become, but even the $95 omakase pauses halfway through for a cocktail glass nearly filled with chilled salmon roe and sea urchin. After a spoonful or two, it can be hard to remember where you are or who you came with.

FacebookshareGoogle+sharePinterestpin it
Acne Studios and Mulberry Solidify Their Friendship With a Special Handbag CollectionPour at Your Own Risk: America Warms to a Spill-Prone Wine Jug
Latest