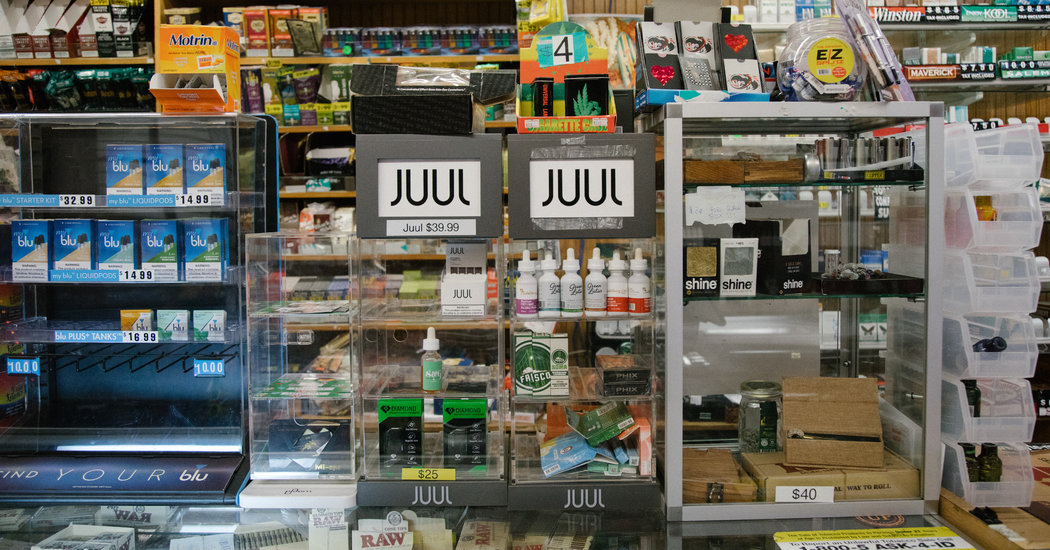 A steep rise in nicotine vaping over the past year, accompanied by widespread minimizing of its potential harm, dominated the findings of a closely watched annual survey of American teenagers, released Monday.

The vaping increase was so precipitous, researchers said, that it was the largest annual jump in the use of any substance, including marijuana, they had seen in the project’s 44-year history.

“Vaping is reversing hard-fought declines in the number of adolescents who use nicotine,” said Richard Miech, the study’s lead author and a sociologist at the University of Michigan, in a statement. “These results suggest that vaping is leading youth into nicotine use and nicotine addiction, not away from it,”

The study, called Monitoring the Future, which is sponsored by the National Institute on Drug Abuse and administered by University of Michigan researchers, asks nearly 45,000 students in eighth, 10th and 12th grade about their behavior and attitudes around alcohol and a variety of drugs. More than one in 10 eighth graders said they vaped nicotine in the past year, while 37.3 percent of 12th graders said they had done so, up from 27.8 percent in 2017.

The percentage of seniors who said they had vaped within the past 30 days — an indication of more frequent use — just about doubled, rising to 21 percent in 2018 from 11 percent in 2017.

Aside from vaping, the study had encouraging news about teenage use of most other drugs.

Tobacco cigarettes continued to remain at historic lows, with only 3.6 percent of high school seniors reporting that they smoke daily, compared to 22 percent two decades ago.

Marijuana levels remained stable, with 5.8 percent of seniors reporting daily use, a level that has stayed pretty much the same over the last 20 years. The study showed teenagers were beginning to move away from opioids and alcohol.

But vaping, predominantly with nicotine but also marijuana, appeared throughout the report as a surging problem. Most e-cigarettes contain nicotine, and the most popular brand among teenagers, Juul, has particularly high levels of it. Nicotine is a highly addictive substance that can interrupt adolescent brain development. And researchers have begun to express concern about the possible long-term effect on the airways of the particles and chemicals in a vape’s aerosol.

But 25.7 percent of seniors who vaped insisted they were inhaling “just flavoring,” suggesting that they may not know that many brands use flavored nicotine liquids and salts. More than two-thirds of sophomores said that both the devices and the liquids, which are ostensibly prohibited from being sold to minors, are either “fairly easy” or “very easy” to obtain.

“If we want to prevent youth from using drugs, including nicotine, vaping will warrant special attention in terms of policy, education campaigns, and prevention programs in the coming years,” Dr. Miech said.

This latest survey aligns with findings released last month by the Centers for Disease Control and Prevention, which said that 3.6 million middle and high school students vaped in 2018.

“Not only are teen users of popular vaping devices like Juul re-glamorizing a smoking-like behavior that years of prevention campaigns had effectively stigmatized, they might be paving the way for a transition to conventional cigarettes as well as other substances,” wrote Dr. Nora Volkow, director of the National Institute on Drug Abuse, in a blog post.

FacebookshareGoogle+sharePinterestpin it
How to Dazzle Like a French Pastry ChefGlobal Health: The World Needs a Urine Test for TB. But It’s Already Here.
Latest