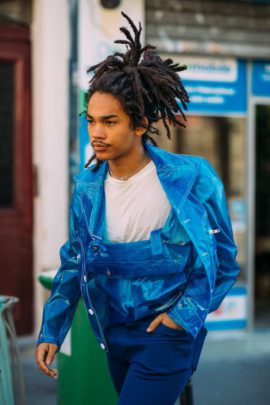 A surfeit of dystopian apparel was evident on the men’s wear runways this year.

And for his Calvin Klein Collection show in February, Raf Simons, the creative director, dressed the male models in safety-cone-orange jumpsuits, knee-high waders and knit balaclavas, all of which gave new meaning to the term “fashion emergency.”

If fashion is reflecting our anxious times, the most alarmist trend these days is the rise of military-inspired clothing and other utilitarian garb normally reserved for emergency responders, security guards and doomsday preppers. 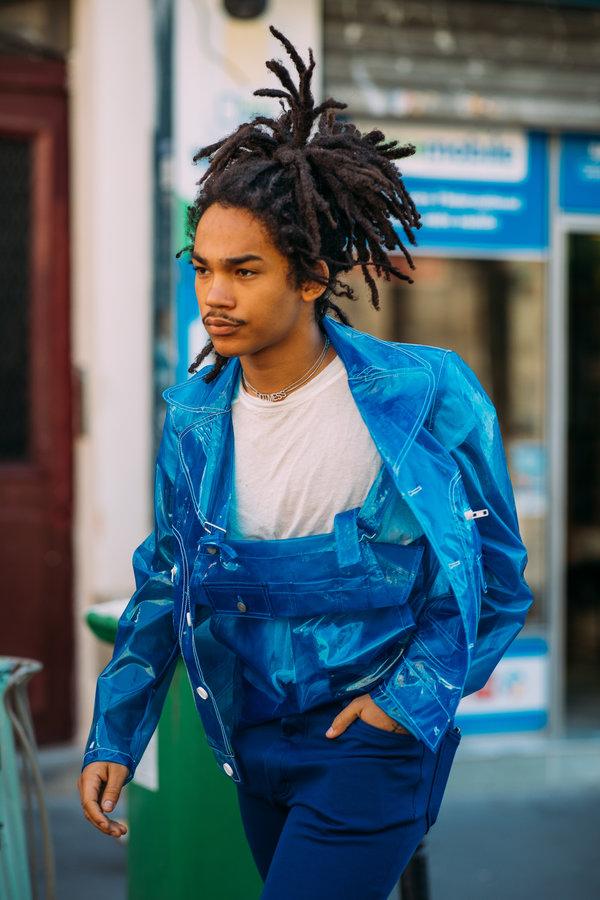 Luka Sabbat on his way to a Maison Margiela show in Paris. CreditAcielle Tanbetova for The New York Times

Style arbiters, including Vogue magazine, have taken to calling it “war-core.”

“Fashion ideates what’s going on around it,” said Francesca Granata, an assistant professor of fashion studies at the Parsons School of Design in New York. And these days, she said, it is “making sense of societal anxieties or fears.”

Cultural manifestations of our collective anxiety are everywhere, said Roseanne Morrison, the fashion director at the Doneger Group, a retail and forecasting consultancy firm in New York. She points to shows including “Black Mirror” and “The Handmaid’s Tale,” the video game Fortnite and the constant drumbeat of news about climate change, political unrest and economic troubles.

In other words, it’s the end of the world as we know it — dress accordingly.

Younger designers have pushed the doomsday references further. Matthew Williams of Alyx, a brand based in Ferrara, Italy, created a tactical vest festooned with cinch straps, Velcro pockets and other details borrowed from military vests.

Face masks and protective hoods by the Soloist, a men’s wear brand from Japan. CreditClara Vannucci for The New York Times

And TakahiroMiyashita the Soloist, a men’s wear brand from Japan, offers perforated face masks and emergency ponchos emblazoned with the words “The Day The World Went Away.”

“It is almost impossible not to make things that have some reaction to what is happening in the world,” said Craig Green, a British designer, whose fall 2018 collection offered playful interpretations of masculine uniforms including coveralls with oversize utility pockets.

But war-core is not limited to the runway; it’s appearing on store shelves and in the streets as well.

On Lyst, a fashion search engine, searches for camouflage are up 38 percent, including camo cargo pants by Ralph Lauren ($290) and a “reconstructed” version by Off-White ($1,190), according to Katy Lubin, a spokeswoman.

Zumiez, a skate wear store outside of Seattle, sells items from Rothco, an army and military wholesaler, including a fluorescent orange rescue vest ($44.95) and a black tactical vest (which is sold out). The items appeal to trend-hungry young adults, not soldiers or construction workers, said Trevor Lambert-Lee, a men’s apparel buyer at Zumiez.

An orange rescue vest from an army and military wholesaler is sold at Zumiez, a skate store near Seattle.

Fashion’s current fetish for work wear also seem to be trickling down to more proletariat-minded stores.

Adam Levy, an owner of Dave’s New York, a family-run store in the Chelsea neighborhood of Manhattan that specializes in utilitarian clothing, said that he has seen an uptick in sales of Carhartt jackets, Dickies pants and other “high-visibility” garments.

Indeed, war-core fashion may not be the most practical clothing to wear in an emergency. “This runs contrary to the prepper mind-set,” said Jim Rawles, the founder of SurvivalBlog, a popular website in the United States for doomsday preparedness.

“For a city dweller who is worried about getting run over by a cab, this all makes sense,” Mr. Rawles said. But “high visibility is basically drawing attention to yourself. And if there’s one thing preppers strive for, it’s low visibility.”

FacebookshareGoogle+sharePinterestpin it
Mini-Vows: From Monkey Bars to Mountains to MarriageBITES: In Edinburgh, ‘Local’ Sometimes Means ‘From Mother’s Garden’
Latest