She Was Given a Deadline, but Married on Her Own Terms 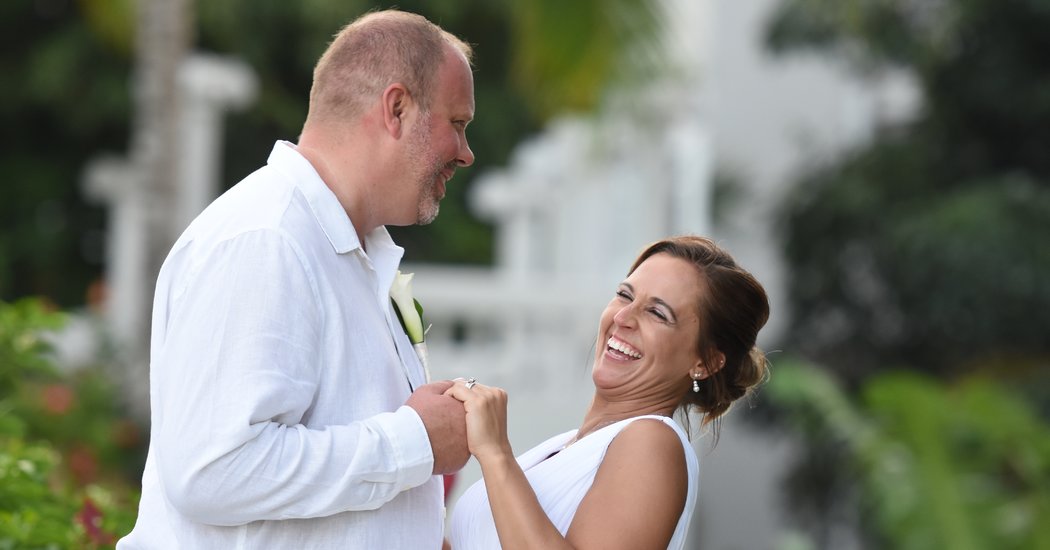 When Melissa Marti saw the email that caused her to sit in her driveway sobbing into her steering wheel, she knew she was going marry Seth Visser. She just didn’t know when.

“We had been talking about it for years — we had even started making plans,” said Ms. Marti, who is from New Ulm, Minn.

But meeting a deadline to present a marriage certificate to the Roman Catholic school where she worked as a dance coach was not something she was willing to do. And so, in June 2018, a few weeks after she got the email that made her sob, she quit.

Ms. Marti, 40, had been coaching the Sonics Dance Team at Cathedral High School for nearly 20 years when New Ulm Area Catholic Schools officials wrote to say her contract renewal was on hold because her living arrangement was under investigation. Cohabitating, the email said, ran counter to Roman Catholic teachings about marriage being a moral prerequisite to living together. A subsequent letter offered two options for preserving her job as head coach, a position she had held since 2002: She could change her housing situation or present a marriage certificate before June 15, 2018.

By the time she received that ultimatum, though, the grief she felt upon first reading the email had hardened. “I was more angry than anything,” said Ms. Marti, who goes by Missy, and who also works full time in a local bank as a marketing officer.

Ms. Marti and Mr. Visser, 39, have been a couple since 2011. They met in 2010 through her mother, Pam Mack, at Medallion Cabinetry, the New Ulm cabinet company where Ms. Mack worked in production and Mr. Visser was an engineer. Mr. Visser, divorced and childless, was commuting more than an hour to work each day from Olivia, Minn.; Ms. Marti, divorced and the mother of 12-year-old Will Marti, has lived in New Ulm all her life.

In 2011, Mr. Visser moved to New Ulm (population about 13,000) to be closer to work. He and Ms. Marti started running into each other at local events like Bock Fest, which lightens the mood of long Minnesota winters with beer drinking by bonfire.

“I was recently divorced and just starting to get out of the house again, and whenever we’d bump into each other we just got along really well,” Ms. Marti said. “We talked openly and easily. It just felt comfortable.”

So comfortable that in September 2011, Ms. Marti invited Mr. Visser to meet her buddies at the New Ulm Fire Department, where she has been a volunteer firefighter since 1999, when she became old enough to follow in the footsteps of her uncle, also a volunteer. The occasion was the department’s annual fund-raiser, the Firefighter’s Dance.

“That was our first formal date, the first time we made an appearance together,” said Mr. Visser, who is now director of operations at Windings Inc., a New Ulm company that makes custom components for motors and generators. He worried about fitting in. “When you’re meeting 90 new people you get a little nervous,” he said. “But I think I gelled with the firefighters.”

Ms. Marti thought so, too. After the dance, it was like a drawstring closed around them. Within months, they were ready to commit to each other. “We both enjoy having a stress-free life and just being around each other,” he said. Early in their relationship they tried ice fishing at a local lake for fun. But through the years, romantic couple time has taken a back seat to Sonics Dance Team events.

Before Ms. Marti became a coach in 2001, she was a competitive dancer at New Ulm High School.

Dancing “is a huge part of girls’ sports in Minnesota,” said JoDee Haala, a member of the New Ulm Area Catholic Schools board of directors and Ms. Marti’s best friend.

High school teams, made up exclusively of girls, practice their high-energy routines two to three hours per day, six days a week during their 17-week season, and compete before judges from December through February. Routines can include elements of ballet, jazz, hip-hop and other styles; sometimes cheerleading-type acrobatics are worked into a team’s three-minute performance.

“I started dancing when I was 10 or 11 and always loved it,” Ms. Marti said. She especially loved that it was legitimized by serious competition. “Our team went to the state finals when I was in high school, and that was so exciting I decided I wanted to stay involved.”

The couple had a beach ceremony on March 1 in Ocho Rios, Jamaica.CreditCreditAkeen Washington

Ms. Marti is not Roman Catholic, though she often attended church with her flock of dancers at Cathedral High. “I always felt supportive of the Catholic Church,” she said. “I never went against what they taught.” Anchoring her support was her devotion to her team. “Anyone who’s ever coached knows you don’t do it for the money. Those girls were like daughters to me.”

Karlie Gieseke, a senior at Cathedral coached by Ms. Marti since she started high school, was among the dancers stunned by the school’s investigation into Ms. Marti’s personal life, then heartbroken by its outcome. In May, Ms. Marti gathered the team to tell them her decision quit rather than be rushed into marriage.

“At first I was in shock, like no way this is happening,” Ms. Gieseke said. “Then I cried for months. She knows more about me than my parents do. The morals she taught us about believing in ourselves and working to achieve our goals are way more important than her living situation.”

When Mr. Visser and Ms. Marti moved in together in 2013, neither considered it a secret. Ms. Marti wasn’t concerned about the community, or New Ulm Area Catholic Schools, finding out. She’s not sure what or who prompted the school board’s investigation.

Karla Cross, the pastoral center staff representative for the Diocese of New Ulm, said it would not be appropriate for the diocese to comment as it is unfamiliar with the specifics of Ms. Marti’s case. Calls to the school board were not returned.

“The reaction from the community was 95 percent positive,” Mr. Visser said. Townspeople, including many strangers, rallied around Ms. Marti.

“People would come up to me and say, ‘Oh, you’re that coach. I’m so sorry about what happened to you,’” she said. Most touching, she added, was a letter from a man at a nursing home whose granddaughter she had coached. “He grew up Catholic and said, in the sweetest way, that he supported me.”

Plus, the school was apparently being selective about the Catholic doctrines it enforced, Ms. Haala said. It didn’t make a point of determining which teachers might have been using birth control, for example.

“If there were rules and stipulations Missy was supposed to abide by, they should have gone through them with her,” Mr. Visser said. “They didn’t.”

The attention the end of her coaching career generated on local news outlets and the internet continues to follow Ms. Marti. “People still stop me to say they’re blown away by what happened, that this could happen in 2018,” she said.

But she and Mr. Visser have gotten on with their lives. Ms. Marti was promoted at the firehouse, where she became New Ulm’s first female assistant fire chief in December. They also continued with their intentions to spend the rest of their lives together.

On March 1, at the Beaches Resort in Ocho Rios, Jamaica, Ms. Marti and Mr. Visser were married by the Rev. Donna Calnick, a local minister with the Church of God, in a short, traditional ceremony. Ms. Marti, tanned, barefoot and in a sleeveless white gown with a plunging neckline, walked down a sandy aisle with her father to the song “Stand By Me.” Mr. Visser, in khakis and flip-flops, awaited her along with a wedding party of three, the Halaas and the bride’s son, Will Marti.

Immediately after the ceremony, Reverend Calnick set up a skirted table near the altar where the couple signed documents legalizing their marriage — not that Ms. Marti and Mr. Visser were in a hurry to present those documents to anyone.

FacebookshareGoogle+sharePinterestpin it
Jennifer Lopez Thinks You Can Wear Sunglasses Indoors If You «Finesse» It Rightwedding album: Did You Have a Wedding Crasher?
Latest