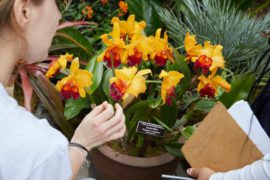 It’s like being hit with a ton of … blossoms.

“The Orchid Show: Singapore,” the New York Botanical Garden’s 17th annual orchid extravaganza, running through April 28, features the natural species and hybridized sensations of Southeast Asia — upward of 70 percent of the display in the Enid A. Haupt Conservatory. Thousands of them, in hundreds of varieties and every conceivable — and inconceivable — shape, size and color.

The orchid, once an aristocratic rarity, now a ubiquity — you can buy them at Home Depot — is still the most unnatural-looking flower of the natural world, dizzying in its opulent, adamant oddity. And that’s just one on its own.

“It’s actually surpassed the poinsettia as the most horticulturally produced crop in the world,” said Marc Hachadourian, senior curator of orchids at the New York Botanical Garden. “They’re the pandas of the plant world — they’re charismatic, they’re colorful, they’re engaging.”

The botanical garden’s partners on the show are Singapore Botanic Gardens, whose National Orchid Garden has the largest collection in the world, and Singapore’s Gardens by the Bay, a green-themed entertainment attraction where the wedding party finale in “Crazy Rich Asians” was filmed. Singapore, which at one time called itself a “garden city,” now calls itself a “city within a garden.” The orchid, mass-produced and energetically hybridized as a major export industry, is its national flower. 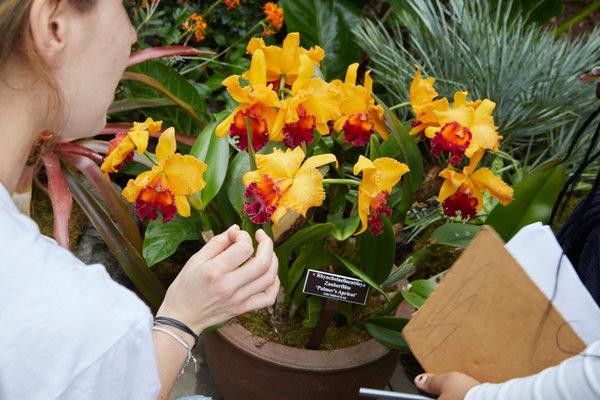 Palmer’s Apricots, as these orchids are known, at the New York Botanical Garden in the Bronx.CreditGus Powell for The New York Times

In a stroll through the conservatory recently, it was difficult not to think of Mr. Hachadourian as the Wizard of Oz, surveying his realm of perfect, unimaginable riches. “Vanda, Dendrobium, Cymbidium, Phalaenopsis and Paphiopedilum,” he said, Linnaeus’s botanical Latin rolling off his tongue as deftly as the daily specials, pointing to the jewel-like faces to the right and left of us. It was an oddly extraordinary experience, as if everything ordinary had been Photoshopped out of the picture: an emerald Instagramatic city, with a kind of plant-phantom Pokémon at play.

The ambassador of the orchid’s new ubiquity is the Phalaenopsis, in a Calvin Klein-underwear white. Known as the grocery store orchid, it is widely, inexpensively available, and the lifestyle star of everything from luxury-condo advertising to wellness spas and supermarkets. Toppled from the throne is the cattleya: the frilled grandmotherly orchid that forms the stuff of corsages. Proust is wearing one on his label in Jacques-Emile Blanche’s famous portrait of 1892.

Because of the Phalaenopsis’s clean, modern, broad-shouldered success, everyone is now trying their hands at orchids, losing their home-gardeners’ fears as orchids lose their stigma as tricky plants to cultivate.

“I own a lady’s slipper and a Phalaenopsis,” said Dr. Michelle Montenegro, who was visiting the conservatory with a colleague, Dr. Alec Petrie. Both are emergency room physicians at Jacobi Medical Center in the Bronx. Dr. Montenegro got her orchids at last year’s show. “They’re actually alive,” she said, with a surprised laugh, when asked about their health. She built a special window shelf for them. “The shelf is definitely helping,” she added.

“I’ve killed a lot of plants,” said Dr. Petrie, whom Dr. Montenegro was trying to talk into an orchid. “I’m better with people —”

She smiled. “Today’s the day, I’m telling you,” Dr. Montenegro said. Their next stop was the garden’s book and gift shop.

The garden’s Singapore show has two major attractions. A pair of supertrees — 18-foot-tall steel armatures in the trunk-like and canopied shape of actual trees — are versions of the artificial Supertrees in a vast grove at Gardens by the Bay, which is the setting for the scene in “Crazy Rich Asians.”

“Disneyland for plant lovers”: A pair of supertrees in the Bronx are versions of the artificial supertrees at Gardens by the Bay in Singapore. They are covered with plants called epiphytes, which grow without soil.CreditGus Powell for The New York Times

Singapore’s Supertrees are over 160 feet tall, and skyways traverse the tops. They are also embedded with photovoltaic cells, which collect energy — like living trees — that is used to power nighttime light displays choreographed to music. And they’re swathed, head to toe, in extra-terrestrial-looking foliage.

“It’s sort of a Disneyland for plant lovers,” said Karen Daubmann, the associate vice president for exhibitions, who visited Gardens by the Bay, and worked to replicate the supertrees in the Bronx. “The orchids that we’re showcasing inside, at the conservatory, are things they grow outside. It’s pretty wild.”

Like the ones in Singapore, the garden’s supertrees were designed to demonstrate a particularly spectacular class of specimens, even for the tropics: epiphytes, or plants that grow without soil, on trees.

“They’re a strange community that evolved to essentially climb the trees to get the best available light, water and moisture,” Mr. Hachadourian said. Orchid alpha types; the acrobats of the plant kingdom.

George Poinar Jr., a professor emeritus at Oregon State University, was the lead author of a 2017 study that established the orchid’s age at 45 million to 55 million years old, 25 million years older than previously believed. He told a science journal, “We probably shouldn’t say this about a plant, but orchids are very smart.”

The show’s other major attraction, inspired by Singapore’s National Orchid Garden, is a promenade of arches, dripping with orchids, that leads to the conservatory’s main dome. The colors move through a spectrum from yellow — Oncidium “Goldiana,” or the “dancing lady” orchid — to pink to darker, hotter shades. It is like walking under a rainbow.

“The ‘Vandaceous Alliance’ is a signature group of orchids highly specific to Singapore,” Mr. Hachadourian said, of their particularly large presence in the show. Singapore’s national flower is the Vanda “Miss Joaquim,” named for the woman who bred it in the 19th century: one of the earliest of artificially produced hybrids still in cultivation today.

In the tradition of honoring people with their own cultivars (there exist, for example, first lady orchids from “Mrs. Herbert Hoover” to the fuchsia-hued Rhyncholaeliocattleya “Melania Trump”) — the New York Botanical Garden has unveiled the Vanda “Awkwafina,” celebrating the actress who starred in “Crazy Rich Asians.” Awkwafina grew up in Queens, and recalled being taken to the garden for her fourth birthday, Ms. Daubmann said.

The orchid — its connoisseurship and collecting — is no longer the exclusive domain of the retired, the academic or the moneyed fanatic that you might have expected it to be.

“Half of my room is dedicated to my plants,” said Sebastian Trujillo, 18, a visitor services attendant at the garden. “Around 415 plants. It’s a jungle in there.” Mr. Trujillo is a high school senior who lives with his parents in Kew Gardens, Queens. “Now, they’re helping me build a greenhouse in the back of the house.”

With popularity, does the orchid — one of history’s most enduring embodiments of the idea of rarity — run the risk, like any celebrity, of overexposure? If we see too many, will we lose the point?

“I asked him what he thought it was about orchids that seduced humans so completely that they were compelled to steal them,” Susan Orlean, writing in her 1998 best-selling book, “The Orchid Thief,” asks a park ranger in Florida.

With an estimated 30,000 wild species worldwide, and hundreds of thousands — and rapidly counting — of breeders’ hybrids, the bloom’s not off the orchid yet.

Through April 28 at the New York Botanical Garden, 2900 Southern Boulevard, Bronx; 718-817-8700, nybg.org. The garden is also hosting Orchid Evenings each weekend of the run.

Related Coverage
How Singapore Is Creating More Land for Itself 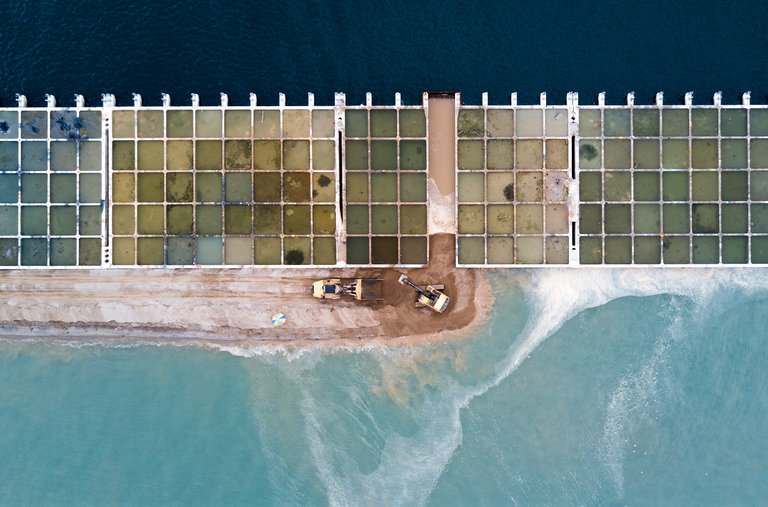 Where Spring Is in Full Bloom 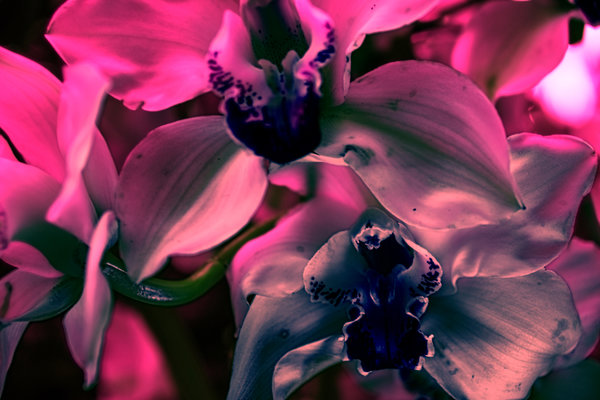 Review: ‘Crazy Rich Asians’ Is a Party With a First-Rate Guest List 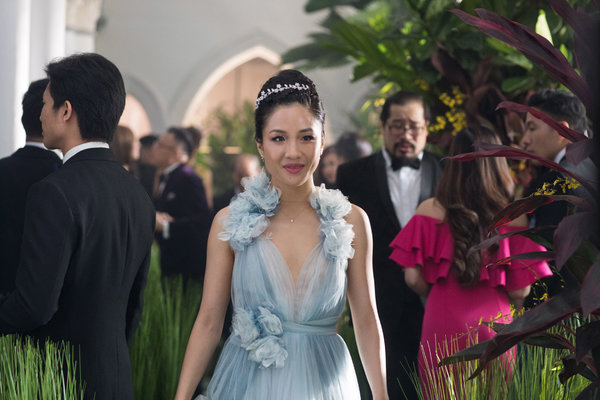 FacebookshareGoogle+sharePinterestpin it
Yes, You Can Play With Your ClothesEl Espace: How Will Netflix Do Justice to ‘One Hundred Years of Solitude’?
Latest