Russian New Year’s Eve: Christmas, the Fourth of July and Thanksgiving, All Rolled Into One 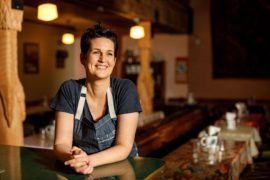 PORTLAND, Ore. — Many chefs say their passion for cooking was shaped in their mothers’ kitchens. Often, because her food was so delicious; sometimes, because it was so terrible.

For the chef Bonnie Frumkin Morales, it is more complicated than that.

“I was always embarrassed by the food at home,” said Ms. Morales, the chef and co-owner of the popular restaurants Kachka and Kachinka here in Portland, where she reinterprets the Russian-Soviet home cooking she grew up with. With a combination of nostalgia, finesse and funk, she breathes new life into ingredients like cured fish, pickled cherries, wild mushrooms, farmer’s cheese and pumpernickel bread.

This entire project would have seemed preposterous to Ms. Morales’s younger self. As she grew up in the Chicago suburbs in the 1990s with parents who had recently emigrated from the Soviet Union, it seemed to her that everyone else ate only American food: chicken nuggets, frozen pizza, steak. 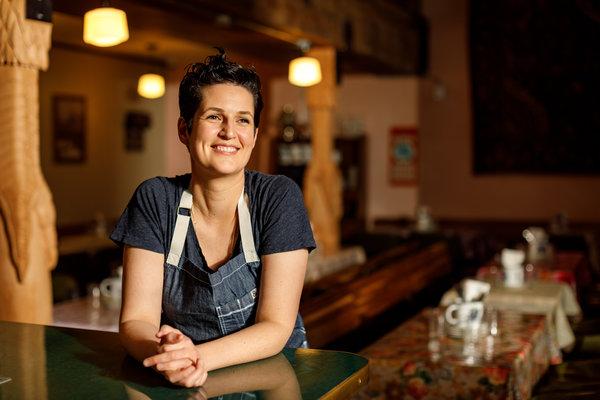 Ms. Morales at her restaurant Kachka in Portland, Ore., where she recreates and reinterprets the Russian food she grew up with.CreditLeah Nash for The New York Times

At her house, there was sauerkraut fermenting in the basement alongside endless rows of pickled fruit and vegetables. Dinners included smelly fish and whole grains and Old World specialties like jellied calf’s foot and cured skeins of fish roe. Often, the kitchen was filled with wild food like berries and mushrooms that her parents insisted on gathering from the woods, and sometimes from neighbors’ yards.

In college, she finally worked up the courage to invite friends to dinner, luring them with the promise of unlimited vodka. “I told them the food would be super-weird and they might want to eat before they came,” she said. “They did not disagree.”

Although Ms. Morales, 37, was born and raised in the United States, her parents, Slava and Luba Frumkin, spent most of their lives in Belarus (then the Byelorussian Soviet Socialist Republic). Like many émigrés from the former Soviet Union, they use “Russia” as shorthand for the complicated place they come from.

They brought with them, and continue to this day, centuries-old traditions of Russian cooking and eating, with some Soviet-era flourishes layered on top. And as was customary in the Soviet era, they celebrate New Year’s Eve with a feast that eclipses every other holiday on the calendar.

Before any Frumkin gathering, the women of the family cover the table with zakuski, appetizers that prevent hunger and preserve sobriety during the pre-dinner period of talking and toasting that can go on for hours.

At a recent party, a preview of the New Year’s Eve feast, in the Portland suburb Happy Valley, Mrs. Frumkin and her sister-in-law, Asya Rokhkind, covered every inch of the table with meticulously arranged dishes, along with a giant round platter of stuffed eggs placed in whorls like a Busby Berkeley dance number. (One section of Ms. Morales’s 2017 cookbook “Kachka: A Return to Russian Cooking,” is titled “How to Tetris Your Table.” It illustrates how to maximize table space.)

“Russians never lost all those skills of preserving food for the winter,” Ms. Morales said. And for them, it wasn’t a pretty artisanal fantasy: with the chronic food shortages in the Soviet Union, she said, “They needed that food to live.”

Although the Frumkins lived in Belarus for generations, they did not escape the upheavals of the 20th century. Mr. Frumkin’s mother, the only member of her family to survive the Nazi occupation, escaped her town’s ghetto in 1941 and traveled for months on foot to join resistance forces in Ukraine. On the way, challenged by a town warden, she passed through only because she knew the Ukrainian word for duck: kachka.

“This is proof that there are miracles,” said Mr. Frumkin, making the first of many toasts to his mother, who was still alive and living in Minsk when her descendants finally left in 1980.

At left, Ms. Morales and her husband, Israel Morales, at the Frumkin family table. Her father, Slava, sits at the head of the table — the best position for making toastsCreditLeah Nash for The New York Times

He, Luba and their son, Simon, then 6, were part of the great wave of Jewish families who left the Soviet Union after emigration rules were relaxed in the 1970s. When they moved to Chicago, they continued speaking Russian at home, so Ms. Morales is fluent in the language as well as in the food.

Now the whole family, as well as a new generation of grandchildren (who were waiting impatiently for the chocolate kolbasa, a fudgy confection that looks like salami, to be served) lives in the Portland area.

But in some ways, the Frumkins remain Russian, and New Year’s Eve remains the biggest holiday of the year: Christmas, the Fourth of July and Thanksgiving rolled into one.

The reasons for this go back to the years after the 1917 Bolshevik Revolution, when the vast properties of the Russian Orthodox Church were nationalized, religious instruction was outlawed and believing in miracles was officially forbidden.

About a decade later, the Soviet regime banned the celebration of Christmas. (Dec. 25 was made a national “day of industrialization,” to be observed by going to work.) New Year’s Eve was declared an official holiday, celebrated at midnight with approved concerts and fireworks. Gradually, Christmas traditions like trees, presents and sweets crept into the New Year’s celebration, including a nonreligious Santa figure called Grandfather Frost who hands out gifts with the help of his granddaughter, the Snow Maiden.

The modern celebration is a family dinner that lasts well into the morning of Jan. 1, accompanied by a multihour televised gala featuring Russian pop stars, glitter, fireworks and an address to the nation from President Vladimir Putin.

On New Year’s Eve, the zakuski course may not end until midnight, when hot dishes are finally served: luxuries like braised short ribs, Georgian chicken tabaka (pan-roasted with lots of garlic and pressed flat, like chicken under a brick), mushrooms and potatoes cooked in lush smetana, the Russian crème fraîche.

When the soprano Anna Netrebko, 47, was growing up in the Russian city of Krasnodar, she said, New Year’s Eve included all the secular elements of Christmas: a tree, presents and a family feast.

“Christmas and church was not prohibited by then,” she said. “But it was no longer part of our tradition.” She follows the custom of covering the zakuski table from edge to edge at her annual New Year’s Eve bash in Manhattan. (This year, however, at midnight on Dec. 31 she will be at the Metropolitan Opera, singing the title role at the gala premiere of a new production of “Adriana Lecouvreur.”)

Even outside Russia, she said, it is not possible to ring in the New Year without a majestic bowl of Salat Olivier, an elaborate mayonnaise-bound chicken and vegetable mélange that is Russia’s modern national dish. Poached chicken is folded with diced potatoes, pickles, eggs, carrots and whatever is dictated by family tradition (in czarist days, crayfish and caviar for the wealthy; in Soviet times, bologna and canned peas for all). When made well and served fresh, as at the Frumkin household, it is shockingly delicious.

“Without Olivier,” Ms. Netrebko said, “you cannot have a Russian party.”

Rich dishes like Olivier, salmon and salo (pork fatback), and traditional dense, dark breads, are seen as protecting the stomach from the alcohol and astringency of the usual accompaniment to zakuski — shots of vodka.

At the same time, vodka is considered good medicine, Ms. Netrebko said, echoing a common belief. “It kills the germs during the Russian winter,” she said, when bitter weather keeps everyone inside.

Although vodka is traditional for toasting, Champagne and Cognac are also popular now in Russia, representing the new pleasures of conspicuous consumption.

“In the Soviet years, everyone had vodka — sometimes too much vodka — but only the elite could get French Cognac and Champagne,” said Israel Morales, Ms. Morales’s husband and the father of their two sons, Noah, 9, and Isaac, 2. Mr. Morales is not Russian (his heritage is Latino, and he grew up in Kansas City, Kan.), but he has fully embraced the Russian style of eating and entertaining, and is Ms. Morales’s partner in the restaurants.

Ms. Morales said he was the first “outsider” ever to be impressed, instead of confused, by her family’s food. “The first time he came to dinner, we left and he said, ‘What the hell happened back there? That was one of the best meals I’ve ever had.’”

At the time, both had graduated from culinary school and were working at Tru, then one of the most ambitious restaurants in Chicago. For her, it was his admiration that eventually cracked open the door to Kachka, where she serves slightly more elegant renditions of her mother’s food, and specialties from as far afield as Georgia, Uzbekistan and Siberia. New Year’s Eve is the busiest night of year at Kachka, and it is where her family now celebrates, with her father dressed up as Ded Moroz, Grandfather Frost.

“This is great food from a sophisticated civilization, even if it’s not what they teach in culinary school,» she said.

She is particularly proud of her restaurant’s extraordinary handmade dumplings, including feathery folded vareniki stuffed with sour cherry compote or farmer’s cheese, and plumper pelmeni, filled with meat and herbs.

“It was after 1 a.m. when we left the restaurant, we had to drive 90 miles north from the city through a snowstorm, and when we got there they hadn’t even served the main course yet,” he said. “That is when I realized that dinner had a whole different meaning to these people. They just love to be at the table.” 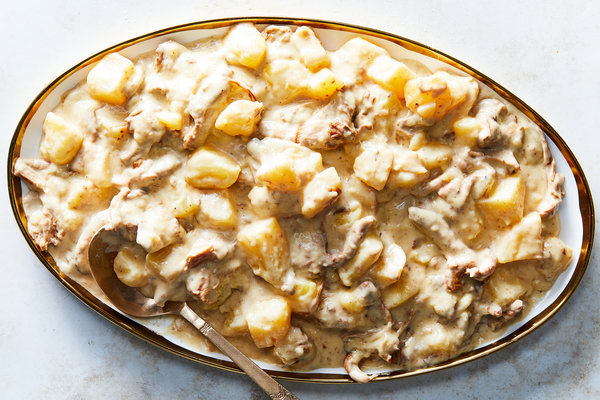 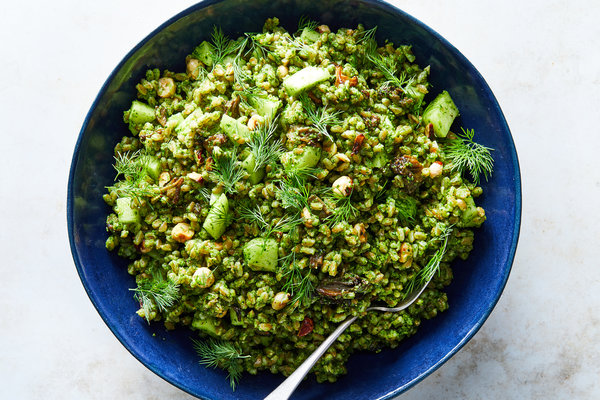 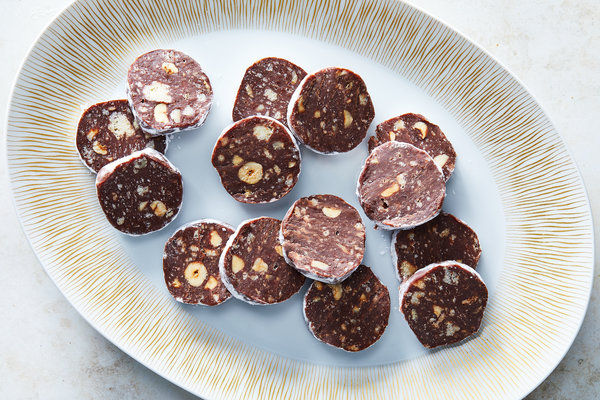