Running to the Wedding. Any Wedding. 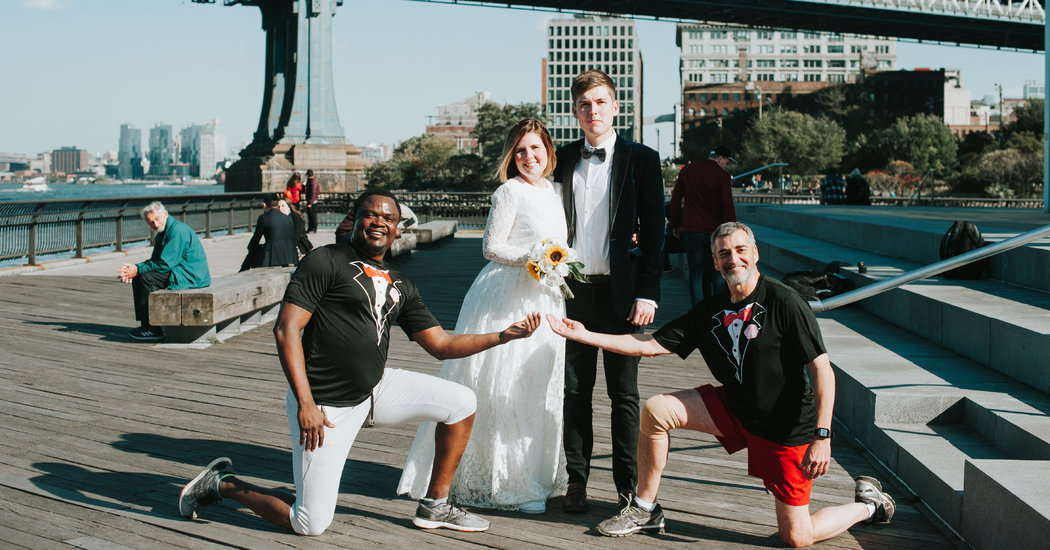 When Danielle and James Ellerby show off photos from their 2018 wedding, they have a bit of explaining to do. It’s not because the couple, who live in Halifax, England, eloped while on vacation in New York City. It’s because their witnesses were two strangers in T-shirts and running shoes.

“Who are these two random guys in tuxedo shirts?” Mrs. Ellerby, 29, said she is asked most often about the pictures.

Those two random guys are members of the running Wedding Hashers, as they call themselves and their Instagram handle. They are a group of five runners from New York and New Jersey who wear custom-made, sweat-wicking shirts that look like tuxedos. They run mostly around Brooklyn to get in pictures with as many wedding parties as possible (with permission).

So far they’re up to 208. They’ve posed with couples wearing formal wedding outfits, casual clothes, even Mets sweatshirts. While most of their photos involved weddings, they also included proms, quinceañeras, vow renewals, engagement photos and bachelorette parties in that count.

This side hobby to their running habit started in 2016 because the group’s regular Thursday lunch running route took them past some popular wedding photo spots in Brooklyn, including Brooklyn Bridge Park.

“We’d run by these scenes of wedding couples taking photos and we thought we should try to get in one of these and that it might be fun,” said Marc Alterman, 61. He is often the member who approaches couples about getting into their photos. “The couples seemed to get a kick out of it, and we got a kick out of it,” he said.

After their first few wedding photo encounters, they ordered their custom tuxedo shirts, which meant they didn’t have to explain as much about what they were doing to prospective photo couples.

Their photo-shoot plans work well on weekday runs, Mr. Alterman said, because most of their members work in Downtown Brooklyn, near the Brooklyn Municipal Building, so they encounter couples having pictures taken after courthouse weddings.

One Saturday in June, though, several members of Mr. Alterman’s New Jersey-based running club, the Raritan Valley Road Runners, participated in a group wedding run (the women wore pink and black tuxedo tank tops). Mr. Alterman called the event “their own bridal party” of about a dozen runners. The group started in Manhattan, ran over the Brooklyn Bridge, then around Brooklyn. They got in the photos of 14 couples that day and one bachelorette party.

“One of us would spot somebody posing for photos,” said Christine Prorock-Rogers, 54, a lab technician from Somerville, N.J., who joined in that day. “We’d all run over.”

She said the group would wait while Mr. Alterman approached a photographer or someone affiliated with the bride and groom.

Mrs. Prorock-Rogers said she had a blast, and not just because they had near perfect weather. “I’m a hopeless romantic,” she said. “I’ve been married for almost 30 years so I’m a big fan of couples and finding that forever person.”

Mr. Alterman lives in North Brunswick, N.J., but he was born and raised in Brooklyn and has worked for the New York City Board of Education since 2001. “The people of this city are often portrayed as cold and unfriendly,” “Honestly, I’ve never found that to be the case. Of course there are exceptions, but I generally don’t find New Yorkers particularly rude or uncordial, unless you give them a reason to be.”

Mr. Alterman says only a small percentage of couples decline to have their photos taken with the runners, and that’s often because of language barriers.

He says he finds local couples warm and friendly. But for out-of-towners who marry in Brooklyn, he said, “I’d like to think we play the role of good will ambassadors, dispelling the notion that New York can be a hostile place.”

This was the case for the Ellerbys, who eloped Oct. 23, 2018 through the Brooklyn-based company Eloping is Fun. The Wedding Hashers encountered the couple when they were having photos taken before the ceremony. “They waited a good 30 to 40 minutes to watch the wedding and be our witnesses,” Mrs. Ellerby said.

“They couldn’t believe we wanted two strangers in our wedding,” Mr. Ellerby added. “But it seems to be a passion of theirs, photo bombing and wedding hashing. It’s good fun.”