Restaurant Review: What If Brexit Were a Restaurant? 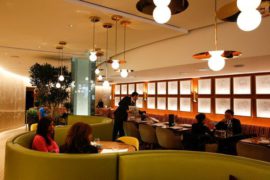 Something seems to be going wrong at Bluebird London, the busily programmed 10,500-square-foot restaurant that the mall in the Time Warner Center imported from England in September. Maybe the people in charge have been taking management cues from Prime Minister Theresa May’s government, which has approached its Brexit plan like a class of first graders trying to build a working jet airplane out of Lego pieces and a flying-squirrel sock puppet. Or maybe the mess back home has just sapped the restaurant’s spirit. Whatever the cause, what was meant to be a cheerful gift from London has turned into the Bluebird of Unhappiness.

Sir Terence Conran opened the original Bluebird in 1997 inside an Art Deco garage built on King’s Road in Chelsea for the Bluebird Motor Company. It was one of his “gastrodomes,” those soaring complexes like Quaglino’s and Bibendum that embedded restaurants within a busy hive of shops, cafes and bars. The gastrodomes’ designs were talked about more often and more enthusiastically than their menus, which aimed for unthreatening familiarity. The current owners, D & D London, have managed to keep the London Bluebird in circulation by changing upholstery and chefs, but it is not at all clear why they or the Time Warner Center believed that a Bluebird clone would play in Manhattan in 2018.

True, the retail shop has been dropped. But up front, next to the desk where the hosts have mastered the art of checking reservations without making eye contact, is a cafe-slash-wine bar. A glass case there serves as a temporary prison for aging pastries and tragic snacks. Beyond is a lounge followed by a bar, the centerpiece of which is an enormous plexiglass sculpture of a ponytailed woman’s head that doubles as a shelf for weird liqueurs.

Just before the ramp that descends to the main dining room is a console with two turntables which, a note on the website says menacingly, are operated on weekends by “live DJs.” At other times, the restaurant stages such events as a workshop in the art of making “a seriously chic wreath.”

The poster-size menus drawn up by Nicolas Houlbert, the chef, cram so much copy onto a single page, and are organized so randomly, that they are best approached as if you were doing a word search, by unfocusing the eyes and waiting until the letters organize themselves into recognizable patterns. Look, here’s butternut squash soup. This must be fluke — no, fluke crudo. Long Island. Burrata. 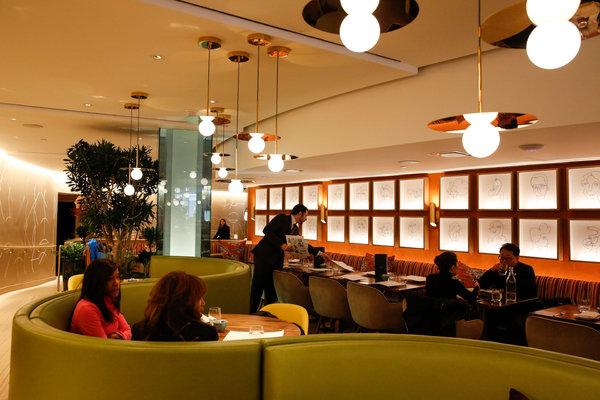 The 10,000-square-foot space includes a cafe, a bar, a lounge (pictured) and a dining room.CreditCaitlin Ochs for The New York Times

When you have finished the puzzle, please savor the warm feeling of accomplishment for a moment, because it goes away once the food arrives.

The “crispy shrimp” have the limp, expired quality of tempura that’s been doing laps all night at a conveyor-belt sushi place. Yellowfin tuna poke has been tossed onto a big, damp heap of unseasoned quinoa, which must be there to soak up any seasoning that accidentally attaches itself to the fish. At lunch there is a lobster Cobb salad with lettuce and round, red objects that are probably supposed to be tomatoes.

Because you are in an English restaurant, you will be curious about the English food. Because you are in Bluebird London, you will regret this. A prawn and monkfish curry is presented on a thali with mango chutney, basmati rice and paratha, which run the gamut from unnecessarily sweet to ridiculously sweet. The fish half of fish and chips is golden and crisp on the ends but pale and soggy in the middle. At least the minted peas that come with it are crunchy.

This is more than can be said for the potato chips that come with an order of beef tartare. They are pale, cobweb-colored, not fresh, and undercooked so they sag and fall apart beneath any amount of beef. The tartare, by the way, is seasoned with ketchup, which is not as wrong as you might think.

If something comes with a pastry crust, exercise caution. On top of an allegedly Cornish chicken pie, sealing in dry chicken and mushrooms coated in grease that is trying its best to be mistaken for sauce, is a dome of puff pastry; it doesn’t taste like butter or salt, but it is cooked. The thicker crust around a farmhouse pork terrine, served with a chill that brought out its Spammy qualities, is on its way to being cooked. The very, very thick football of crust encasing beef Wellington is cooked only on the surface; deep inside, where it meets the tenderloin, is a mass of wet, gluey dough. This costs $95 and will serve two people, both of whom had better like the taste of raw flour.

All is not doom and gloom in the pastry department, though. The pull-apart cheese straws are thick, puffy and warm, bronzed on top with baked Montgomery’s Cheddar. Most of the sweets are likable, particularly the cube of sticky toffee pudding and the wedge of Bakewell tart with a layer of orange marmalade between the frangipane and the pastry shell.

The only real hazard on the dessert menu is the barely congealed Pimm’s jelly at which somebody has hurled fistfuls of chopped cucumbers and strawberries. It’s like a stray plate of salad that you might pick up at a party before you realized that somebody had dumped the warm dregs of a drink into it.

The servers seemed eager to oblige, but gave the impression of struggling in the face of unseen enemies. One night, asked “Still or sparkling?,” I chose the sparkling water. My server began to walk away, then turned on his heel and said, “I’m sorry, we’re all out of sparkling.”

After the main course was cleared, I asked him for the Chocolate Bluebird.

“That is our signature dessert,” he said. I nodded. I had read that this was a chocolate mousse inside a blue-chocolate shell in the shape of a vintage racecar once made by the Bluebird Motor Company.

“Unfortunately, we do not have it tonight,” he said.

His courtesy went a long way. Ultimately, though, I preferred the blunt approach that one of the bartenders took with one of my guests. Looking over the long list of old and new cocktails, she asked the bartender which he would recommend.

FacebookshareGoogle+sharePinterestpin it
A Family’s Christmas, Filled With the Tastes of JamaicaField Notes: For Wedding Guests, a Touch-Up at the Glam Bar
Latest