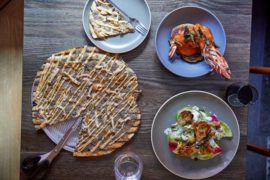 When I left my home state of Rhode Island at 18, it didn’t take long to discover that there was almost nothing about its local food customs that didn’t make outsiders laugh. That small children routinely bought coffee-flavored milk in school cafeterias; that “beer” was not pronounced with an “r” at the end, but pizza was; that a hot dog shortened to about four inches and topped with meat sauce is called a hot wiener, and that a counterman preparing six of them at a time may deploy a maneuver known as “wieners up the arm” — all of this apparently strikes people who grew up more than 20 miles from Providence as very funny.

When New Yorkers hear that Violet, a new restaurant in the East Village, serves a style of pizza that comes from Rhode Island, they start to smile, as if getting ready for the punch line. In fact, though, Violet’s pies are a homage not to the whole state but to a specific restaurant, Al Forno, in Providence. If you know one thing about Al Forno, you know that its pizza is not a joke.

One of the restaurant’s two founders, George Germon, originated the recipe in the early 1980s, more or less out of desperation. After failing to get an oven hot enough to produce a crust as thin and crunchy as the ones he remembered eating in Italy, he tossed dough on a wood-burning grill and watched in awe as it stiffened to a crisp almost instantly. The pizza he and his wife, Johanne Killeen, would develop and elaborate from there was in a category of its own. The skills required to bake dough in a pizza oven, whether it runs on gas, coal or wood, don’t apply to grilled pizza at all. This makes it an unending source of fascination to pizza technologists including Violet’s chef, Matt Hyland.

With his wife and business partner, Emily Hyland, Mr. Hyland paid tribute to wood-fired New Haven and New York pizza at his first place, Emily, then took on Detroit pan pizza at Emmy Squared. They have expanded both restaurants to new locations, including Citi Field, where Emmy Squared is now the “official pizza.” But Mr. Hyland has been a student of the Al Forno school of pizza for years, since going to college in Rhode Island. Violet, which he opened at the start of the year, is dedicated to the style. He has worked allusions to other features of the state’s cuisine into the menu, which makes forays into pasta and small seafood dishes, but the pizza grill is at the center of the action.

Anyone who has eaten at Al Forno will recognize the lineage of Violet’s pies. Both are as thin as a saltine all the way to the edge, with parallel lines of grill marks on their undersides. Al Forno puts fontina on its margheritas, as Violet did with all its pizzas until recently, when it began experimenting with havarti. 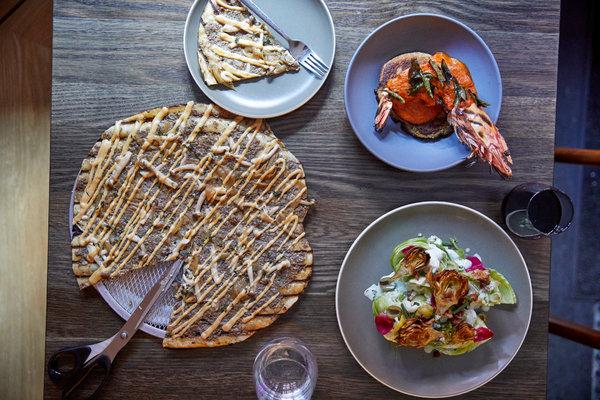 Violet pays homage to Rhode Island specialties including johnnycakes, top right, with grilled shrimp, and grilled pizza, left, with duxelles and pickled mushrooms. Also on the menu is an iceberg wedge with fried artichokes and ranch dressing.CreditJohn Kernick for The New York Times

In any case, the cheeses are on the dry side and grated for fast, thin distribution. Sauces are splashed down by the spoonful, quickly, before the crust burns. That’s the template for a pie called the Atwells: a base coat of grated havarti and pecorino under big blots of a garlic-laden pesto made even greener than usual by the inclusion of broccoli and pistachios.

While Al Forno tosses raw, slivered scallions on almost every pie, Violet may chop its scallions or grill them. One appealingly eccentric pie that combines a New Haven clam pizza with a Peking duck pancake is finished with fried julienned leeks.

Olive oil does give Al Forno’s crust extra crackle and flavor, but Violet’s less lavishly oiled dough, made with a sourdough starter, has more flavor of its own. It’s a little salty, crunchy but not brittle, more substantial than you expect, and highly chewable. Violet gives you a heavy pair of shears to snip the pie into wedges, or any shape you like. Wielding them supplies the palpable thrill of using exactly the right tool for the job, and it’s even better than that because the job is eating pizza.

A trip to Providence last weekend, though, turned up more than structural similarities between Violet and Al Forno. Three of the four pizzas on Al Forno’s menu reminded me of pies I’d eaten at Violet. One resembled the Atwells, but its pesto was made with asparagus rather than broccoli.

For Violet’s Beech Vibes, a thin layer of duxelles is spread from rim to rim, then topped with tahini, caramelized onions and pickled beech mushrooms. It reminds me of a pissaladière in which the anchovies have been replaced by mushrooms. Al Forno makes a duxelles pizza, too, but tops it with unpickled white mushrooms, and doesn’t use tahini. And, of course, both places do a variation on a Neapolitan margherita, called the margarita in Providence and the Classic in the East Village.

The difference between their dough recipes doesn’t quite put to rest the suspicion that Violet should be more conscientious about avoiding overlap even though Al Forno is 180 miles away.

Matt Hyland, the chef, fell under the spell of grilled pizza while attending a college in Rhode Island.CreditJohn Kernick for The New York Times

Most diners, of course, will just be happy to have a new style of pizza in town. Any of Violet’s pies, eaten before or after the iceberg-wedge salad with blue cheese and a jolt of ranch dressing, or the frisée salad tossed with fried artichokes, would make an ideal fast dinner. Beyond that, the going can get tricky.

All the pastas I tried seemed like rough drafts, from the radiatore baked in a very salty vodka sauce to the spaghetti con vongole con dashi, a Japanese-Italian blind date that doesn’t have the right chemistry. The two desserts I had were even stranger. Describing one of them, a cheesecake with banana pudding on it, the server said, “I’m just going to tell you what it is and if you guys want it, you can order it.” If the warning had been any stronger it would have come with liability waivers.

If you did want to build a longer meal, some of the seafood appetizers can help. Not the “stuffies,” baked stuffed littlenecks or cherrystones that could use more clam. The smoked mackerel, though, is excellent and comes with some unusually good fresh-fried potato chips.

There are also shrimp that have been grilled with their heads and shells on, placed over johnnycakes and splashed with spiced piri-piri sauce. Johnnycakes, which are made of fried cornmeal mush and taste like it, are probably more strongly identified with Rhode Island than any other food. I have never been sure why, because johnnycakes can be found, if you really want to look for them, all along the Atlantic Coast. The only time I’ve seen Rhode Islanders eating them was on a Boy Scout camping trip, and boy scouts will eat anything if you leave them in the woods for a few days.

In any case, the johnnycakes that Violet places under the shrimp and the piri-piri sauce are kind of wonderful. The cornmeal has a lush, right-off-the-cob flavor. I’d have them for breakfast, lunch or dinner. Is it possible that the joke has been on me all along?

FacebookshareGoogle+sharePinterestpin it
Off the Menu: Thailand’s South Gets Its Due in Williamsburg, BrooklynNoted: Why Is Silicon Valley So Obsessed With the Virtue of Suffering?
Latest